Turning on the Light

Tips, Tricks, and Stories for Better Living with Low Vision 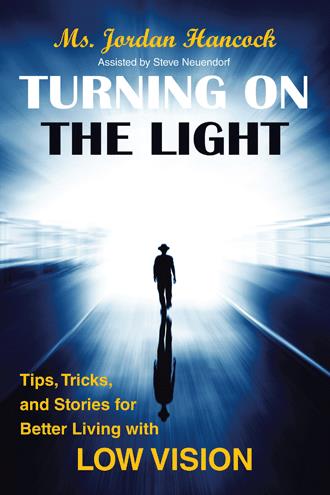 Today as I sit at my kitchen table, I have purchased 15 black markers and tablets. I feel so frustrated. There is so much I want to share with you about being visually impaired and the ramifications. I think back to when I first became impaired. It was instantly with no warning. I decided to have my eyes checked because small print was so hard to read. I went in to do so. My husband Gary went with me. They told me they would dilate my eyes and that driving was not recommended. I was told my eyes would clear that afternoon, and they didn’t. I waited till the next morning, and they didn’t. That afternoon, I’m becoming quite concerned. The next morning, I could not see anything but a blur. The third day we returned to the Doctor. I remember they ran out in the waiting room and took pictures – Click, Click. What’s that for? I asked. No answer. I was led back by a lady into a chair and she took a look at my eyes. She said, “You’ll be OK”, and left the room. It was not the Doctor who had first examined my eyes. We were told to go home, which we did. That was fifteen years ago. My eyes are still dilated and fuzzy. Doctors have named my condition saying I have (Age-related) macular degeneration (AMD).

Author Jordan Hancock has grieved over the sight difficulties that she will face for the rest of her life. But to help her cope with her changing situation, she decided to share her insights, stories, and lessons with those who might find them most helpful. Turning on the Light presents some of her personal stories and offers tips and tricks she has learned over years of study and learning. This narrative provides valuable information and guidance for those who are visually impaired, their caregivers, and their loved ones. It is full of ideas for adapting to diminished vision and dealing with fundamentally important day-to-day routines. It also features ideas on how to cope with the reality of your diminished sighted world, exploring the practicalities of navigating the kitchen, bathroom, clothes closet, and jewelry box and dealing with everything from food organization to travel and shopping. Through self-reflection, humor, and spirituality, you can overcome the challenges that each new day brings. Designed to help those with impaired vision, this guide seeks to help you feel more comfortable, safe, and secure in your everyday life.

Jordan Hancock lost her husband and her eyesight more than a decade prior to writing this book. She has a background in sales, publishing, public speaking, and community action, including through Rotary International. She currently lives in Commerce Township, Michigan.