Drawings by Peter Bonner A Conversation about Drawing 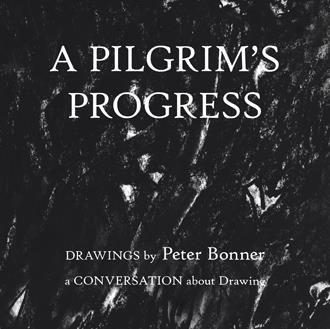 to be discussed when you first went to the Finke River you slowed down and started to look around a lot, and you made watercolors on A5 sheets. We were the ones working on A3 and A4, but you worked really small and then you put them all together and they made a big work that covered the side of the bus. Peter: That’s true. Though the first thing I did when I got to the desert was fall asleep. I remember we arrived at the Finke River and I couldn't see anything. My wife Moriah and I had boarded a plane in New York City and we disembarked in Alice Springs a day later. We went from an intense environment with flashing lights and sirens blasting 24 hours a day to the desert, where there are no lights or anything man made for that matter. My eyes and my senses just couldn’t see a thing; it felt like everything was one tone, all the shapes and forms blended into one. I had a little sketch book so I just went for a walk, I was jet lagged and it must have been about one in the afternoon and I fell asleep on the river bank. When I woke up late in the afternoon I opened my eyes and I could see this white gum tree silhouetted against this mountain range, it was the first thing I could see, so I drew it, and then I began walking around with this little sketch book drawing whatever it was that caught my eye. I felt like I was seeing for the first time, everything was exciting and that’s how I got into the Finke. I began again! In the Finke I was sitting there working flat and I was no longer looking at a vertical surface, I was sitting with a horizontal surface.   I wasn't able to read into the space, rather I was looking at the surface as I worked, seeing how one area affected another and how the marks and shapes worked, and the feeling that the surface gives you. The feeling I got whilst I was working was that Genesis could have looked like this: a massive, pure and pristine world as described in the Old Testament. That feeling of Genesis was the inspiration for the large work that ended up on the side of the bus. Shane: W.E.H. Stanner calls for white people to start thinking black! Is that what you’re thinking, in fact, in Eric’s essay he mentions the Western soul. Is that what you’re thinking about? Peter: That’s a good way to describe it.

In 2004 Australian artist Peter Bonner embarked on a period of intense drawing. He drew in New York, the American Southwest and the Australian desert and he drew constantly. Something altered. A day in the life of the desert held lessons in how to see; memories from his early past came into the picture. In Bonner’s words: “It’s hard to speak just the right amount of the truth of what happened and just the right amount of the magnetic, so that people really want to hear about it— and it’s hard to find a way to do it quickly so the moment isn’t lost—” In the Australian winter of 2018, an exhibition of Bonner’s drawings took place at the School of Clay and Art (SoCA) in Melbourne. It provided the occasion for an extraordinary conversation about drawing among a group of Melbourne artists. With the feeling of shared, unfolding experience, A Pilgrim’s Progress documents both exhibition and conversation.

Peter Bonner arrived in the U.S. in 1998 to study with peers of Pollock and de Kooning and other members of the New York School, and was later drawn to the Aboriginal artists of his native Australia. Reckoning with these opposing influences through the practice of drawing— a preoccupation lasting more than a decade— he developed an artistic process and vocabulary that has been the foundation of his work since. Bonner, who lives and works in New York City, has exhibited in the U.S., Europe and Australia.