In Search of My True Identity

A Journey from Disillusionment and Despair to Hope and Fulfillment 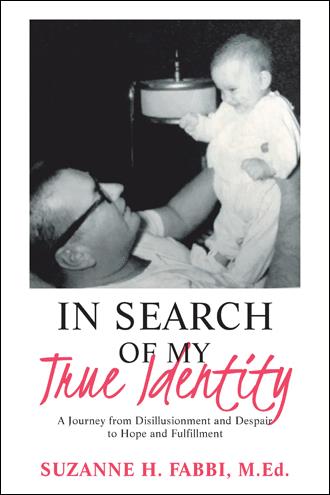 In Search of My True Identity: A Journey from Disillusionment and Despair to Hope and Fulfillment Suzanne H. Fabbi, M.Ed. Book Preview Part I – Disillusionment and Despair, Ch. 2 – p. 6 Though she knew that her negative thoughts did her no good, she couldn’t keep herself from them. That was her pattern. A few days of mania made her commit such foolish acts, and then the depression would set in. She would spend interminable days berating herself for her self-inflicted pain and mistakes—each time lowering her self-esteem a little more—but then the mania would set in, and she’d go back for more. The cycle had become far too predictable, and although she hated herself for it, she felt powerless to stop it. Part II – Hope and Fulfillment, Ch. 10 - pp. 39-40 The secret he had held so long could be held no longer. “Thelma,” he gently announced, “we’re going to have a baby.” He could see on her face that she couldn’t believe what she had heard—that it couldn’t be. Just as he couldn’t stand the silence any longer, she thought out loud, “Did he say we are going to have a baby?” Taking her hands in his own, he brought them to his lips and kissed them and answered, “Yes, honey, that’s what I said. In late June, we are going to become parents!” Charles imagined that Thelma couldn’t begin to understand what he was telling her. “How could this be? What baby? Whose baby? When? Where?” The questions came faster than he could answer them, and with each answer grew two distinct, conflicting emotions within her. The look on her face, though filled with wonderment, told Charles that she was finding something about the news hard to accept. As tears began to fall from her eyes, Charles asked, “Thelma, what’s wrong? What are you thinking?” He searched her face for her thoughts, as it took her a moment to collect herself before she answered him, slowly, deliberately, “Chuck, . . . I don’t know if I can . . . love another woman’s child.”

Kathleen already had two boys to raise by herself, but when she went out with Richard, she thought he had her best interests at heart. He had been a childhood friend and knew her first husband had abandoned her. He also knew about her bouts of mania and depression, and he would not take advantage of that … would he? But after missing her period and not hearing from Richard, Kathleen determined that her worst fear had come true—she’d gotten pregnant again. She did not want to give her baby up for adoption, but she felt she had no choice. Years later, her daughter, Suzanne, seeks to discover the truth of her birth, but she does not end up finding answers until age forty. In this book, Suzanne relives her journey of seeking answers, describing the circumstances, challenges, heartache, and the hope associated with giving a child up for adoption and fulfilling the dreams of a barren couple. Told through the eyes of multiple personas—her birth mother, her adoptive parents, and herself—the author provides a record, partly fictionalized, of the ordeal that families go through when going through adoption.

Suzanne H. Fabbi is a retired secondary English teacher, having taught for twenty-four years in middle and high school and at the college level. She is the mother of four children and grandmother to seven, and she resides with her husband and Yorkie pup in Las Vegas, Nevada.