From Under the Veils of Creation

Book One of the Divine Dozen Series 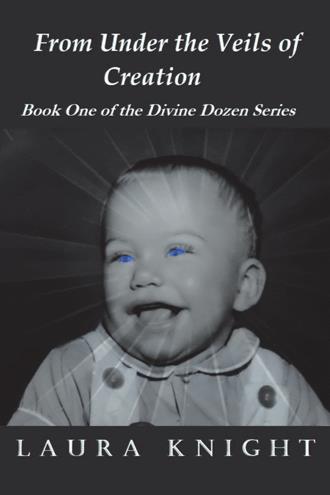 “Take it!” Tregyn’s voice was an urgent gasp. “You must find a way!” His wings, broken and crumpled behind him as he raised his shaking arm, pointing at the lighted chamber in the center of the command room. I glanced at the chamber, a small flashing light suspended there. Tregyn’s arm dropped back to his side. His physical form disintegrated and he was gone. I rushed to the chamber, grabbing it with both hands. I slid my long fingers around the band in the center and the chamber opened, revealing the bright, glimmering Catalyst Grain. My comrades were falling to the blast impacts that shook our vessel. The hull was breached and I was grateful to have been on the deck below, unaffected by the direct hits that surprised us. “Speed of the God Force, Declan.” Myrta’s voice wavered as she dissolved to mist and escaped the flaming vessel. She had been at the helm and the second blast of enemy fire had come through the observation screen, melting the controls and enveloping her in whatever frequency wave the vile enemy had discovered. I racked my brain to find an escape. The mission is all that matters and I must complete it. I barely had the strength to hold the chaos in my thoughts at bay. I was working out the best strategy available, and suddenly, with a force like a blow of a sledgehammer, the Grain flew into my chest and encapsulated itself there. I gasped as the raw power of it exploded through me. Another blast from outside hit the ship and I heard the sound of tearing metal, but it seemed far away. I took flight, my wings barely a whisper and unheard through the explosive blasts of the attack. I raised my hands and opened the small transport pod. I could hear the main computer begin to count down, and nearly laughed out loud. No evasive maneuver capability, no defense shields, no actual firing power other than celebratory fireworks, but the stupid thing has a self-destruct function. Maybe the explosion of the ship would be enough cover. Maybe the Parasites wouldn’t see the pod separate from the presentation vessel. Maybe I could escape with my physical body and complete the mission in spite of it all going awry at the hands of the Parasites. Parasites! How dare they launch an attack! And how dare they desecrate the High Holy Days! I could not waste time and energy thinking of it, but oh, how I longed to be part of the units that would retaliate for this disgrace! I hit the controls before I even managed to get in the seat. The transport pod engines fired up, the main vessel hatch opened. I pressed the lever forward and lifted, the command ship’s computer counting down. I am focused. I must get out, I have to get the Catalyst Grain out. I need clearance, there isn’t enough time. “C’mon, c’mon.” My right wing flutters slightly as the pod rises. A small vessel designed for the slow and dignified movements of pomp and ceremony, it wasn’t fast enough for what I needed now. A flash of blinding light seemed to come from thin air in front of my eyes and I am spinning. The sound of the blast not even reaching me as I float, stunned. The transport pod spins and flies away from the command ship in several pieces and a shower of sparks. I see it as if it were sinking into deep water and buffeted by under currents. Soundless, beautiful, fading into darkness as it gains distance from me. I finally come to my senses, shaking my head and blinking. I was created for times such as these. I have the strength, the stamina, the ability. I try to get my bearings as I flow with the momentum of the last explosion. At least I’m headed toward the planet. As long as I get to the planet, I can set the Catalyst Grain and the mission will be complete. The mission is all that matters. This planet, Earth, the first to attempt this metamorphosis. The Catalyst Grain has to be set there for it to benefit the human race. I am Declan, a seasoned warrior and hero among my kind. Not the highest level of hero or warrior, no. They are away at war, always war. But this mission was entrusted to me and I will find a way to overcome this complication. The Catalyst Grain pulses strong in my chest, like a loud and intense human heart beat. It senses that the planet it was made for is in close proximity. All I can do is curl my body and lean as I try to slow my descent to the planet’s surface. The escape vessel enters the Earth’s atmosphere and becomes brighter in a flash of heat. More parts of it break off and spin away. I close my eyes, pull in as much Source energy as possible. I focus my life force on the pulsing Catalyst Grain in my chest and set my intention to join completely with it as one. It is the only chance I have of completing my mission. The only chance of bringing glory to my fallen comrades. I feel the folding begin as I am pulled away from myself, my physical body separates from me and begins to fold itself smaller as it transforms to mist. The planet’s surface is rushing up, but I don’t see it now. I am compressed, tighter and tighter, I am wholly absorbed by the Catalyst Grain and it is wrapping itself into me, my life force. We are one, a powerful, thrumming, pulsing energy. This is the Source energy…the power to create worlds.

Declan is on a vital mission, but after he’s detoured by an ambush and subsequent crash, he must learn a whole new way of life and recover his memories. Pish wants power, and he doesn’t care who gets hurt along the way. Chris was a regular kid who grew up to be a regular guy, until he found out that he wasn’t. From his birth, he was chosen or maybe volunteered. Either way, he has a purpose greater than he ever imagined. And time may be running out.

Laura Knight is a writer who currently lives in southeast Kentucky with her husband and daughter, as well as the family’s 3 dogs, 1 cat and 1 bearded dragon lizard. Laura is a professional freelance copy writer and has been crafting words for over 30 years. Laura is a member of the Professional Writer’s Alliance and has also appeared for many public speaking events for career women and aspiring young authors. Laura works to research her novels and maintain scientific integrity while encouraging readers to expand thoughts and ideas. She enjoys wrapping “Aha” moments and some fact in her fiction to provide information in fresh and entertaining ways to her readers. She also loves to hear from readers and reads every review, comment, and message personally. Twitter: https://twitter.com/FullCircleCopy Author’s website : www.lauraknightbooks.com