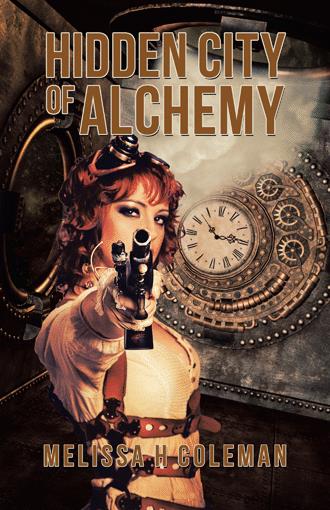 The hail of gunfire from the motor-wagon increased, smashing one of the lanterns and spilling kerosene down one side. Lizzie fired again, pulling the trigger until no bullets remained inside the gun and the hammer clicked against the firing pin. With more gunfire from the vehicle behind, an errant spark from a ricocheting bullet caused the liquid to ignite. Flames roared up the side and she flinched back, almost losing her grip on a swearing Albert. He turned towards her. “We have to jump.” Is he mad? Jump where? Seeing her hesitation, Albert stood up on the driving board, putting one booted foot on the wooden dash. Before she realised his intention, he gathered her towards him, lifting her easily with one strong arm. She found herself clutched to his broad chest with her arms around his neck. With a grunt he leapt, and in that weightless moment her heart rose with his momentum, threatening to beat out of her chest. They landed square on the back of one of the fire-panicked horses. With his arms around her, he gathered the excess rein in one hand and reached between their bodies. Despite the danger, or perhaps because of it, even the back of his gloved hand across her corset sent electric tingles through her as he pulled out a wickedly sharp knife. She moved with him as he leant forward to cut the traces and free the horses from their confinement. As the horses leapt away, she gripped the gun tightly, making sure it would not fall. She wanted to reload, as she heard the motor-wagon in pursuit behind the flaming clarence. How would they survive this? The burning carriage rolled out of control behind them, jounced wildly, the remaining reins tangled in the front wheels. With a jerk the burning clarence pitched end over end, smashing into the cobblestones with a thunderous crash. The horses, now freed, whinnied in fear and raced forward. Clutched against Albert’s chest, Lizzie heard the motor-wagon slam into the carriage and swerve into a wall.

Melissa's debut novel, The Halfling, was awarded 5-star reviews from Readers Favourite and her second offering likewise received great reviews, earning 5-stars. Her journalistic writings have appeared in Regional and National newspapers, and online media outlets. You can visit Melissa's blog for news, reviews and upcoming events or the latest progress on future novels and short stories. In 2018, Melissa married her best friend and changed her name to reflect that. Contact Melissa Coleman: Website: www.melissahcoleman.com Email: wordsmith@melissahcoleman.com Social media: @melhnorthauthor Goodreads: Melissa H. North AU UPDATE: Award-winning author Melissa Coleman published her first Steampunk anthology - A Confabulated Compendium of Anecdotes - in 2017. She is a freelance journalist, a bibliophile, and a karaoke champion, although her pet Maremma would beg to differ. Through her books Melissa provides a glimpse into her imagination, unfettered by the laws of logic and probability, a most anomalous wordsmith. She loves to transport readers to a time when zeppelins and automatons are considered the norm and where heroes with retrofuturistic gadgets monopolise the page.