10 Foundations For a Meaningful Life (No Matter What's Happened) 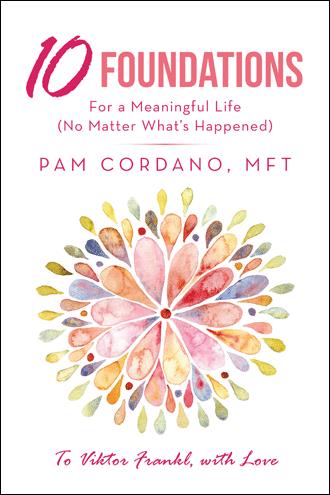 IT’S ONE THING TO WANT A MEANINGFUL LIFE;
IT’S ANOTHER TO KNOW HOW TO CREATE ONE.

In this personal, wise, and generous book, Pam Cordano, MFT outlines 10 Foundations anyone can follow to build a meaningful and joyful life, despite loss and suffering.

Drawing from her personal story as the first woman in four generations not to lose a baby to authorities, Pam shares insights from her beginnings as a perpetual outsider, to her young adulthood as she struggled with addiction and aimlessness, to her awakening at 46 years old when she finally and definitively chose life.

Pam was deeply moved by Viktor Frankl’s Man’s Search for Meaning. In it he wrote, “It did not really matter what we expected from life, but rather what life expected from us.” These words provided the impetus for Pam to find out what life was asking of her. She devoted herself to discovering how to live a life of meaning, and how to help others do the same.

Based on her work with cancer patients, widows, and adoptees, this book distills the day-to-day methods to get unstuck and find meaning, no matter what’s happened.

AMONG PAM CORDANO’S MOST VALUABLE INSIGHTS:

Pam Cordano, MFT is a psychotherapist, cancer survivor, and adoptee who is passionate about helping people identify and cultivate what is uniquely meaningful to them, which allows for increased vitality and new possibilities. Pam is particularly interested in the power of community to catalyze healing and growth.