A SEEKER’S GUIDE TO SCIENCE OF OBSERVATION 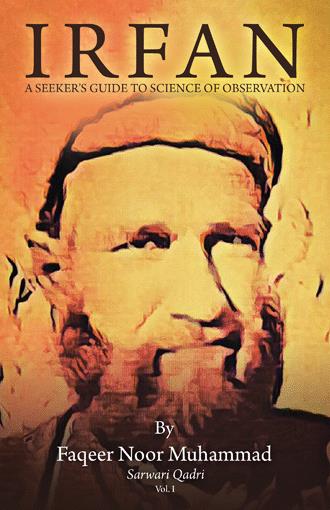 Sufism, mysticism and spiritualism have great importance and value in world religions specially in Islam. Hazarat Faqeer Noor Muhammad presented this wonderful knowledge in his unequaled and matchless book IRFAN in a unique way. He was an authority and unsurpassed on this subject. Hazart Faqeer Noor Muhammad was from the noble family of Hazart Mir Gesoo Daraaz and was a perfect and matchless exponent of unique and everlasting Faqar of Hazart Sultan Bahu( The King Of Gnostics). He deeply and extensively studied the books of Hazart Sultan Bahu and presented his wisdom and knowledge to the world. Although, noble and notable, Sarwari Qadri Order is making spiritual understanding simple and easy in the world, Kulachi (District where Faqeer Noor Muhammad was born) is playing his full role in this effort. The living example and evidence of it is present in the form of outstanding literary work IRFAN. IRFAN is a treasure of the secrets of God and is key to success in both the worlds vis; this world and most importantly the world hereafter. The subjects of Irfan help a person to truly recognize his or her Creator--the God. I feel so proud when I think of the world-famous book’s author, Hazart Faqeer Noor Muhammad (May God Has Mercy on his Soul), is my grandfather. He was born in 1883 in the united India (before partition into India and Pakistan) in the district of Kulachi, Dera Ismail Khan. That is why Kulachi has started being called Kulachi Shareef (Shareef-- a respected way to call a city name due to some reverend personality). This village is my birthplace as well. His holy shrine is located there for everyone to visit and its name is NOORI Darbar. In the noble IRFAN, the existence and ineffaceable person of God has been so presented with solid evidences and arguments that the reader convince deep in his heart the being of his Creator (Allah, the God). The Indian religious culture and the knowledge and philosophy of the western scientists and philosophers have been supported with philosophical evidences in IRFAN which seems like justifying the path in understanding the exitances of God. Whatever knowledge a wayfarer needs in the way to God (Allah), has been mentioned in this wonderful book IRFAN. Study of Irfan enlighten all the ways of the deen (Islamic way of life). Irfan is not only a book but an ocean of religious knowledges in which one can achieve the unfathomable treasures of Gnosis. Two rare, untold and unexplained secrets, depth of whose cannot be imagined and whose philosophy, knowledge and explanation has been first time surfaced in Irfan and this make Irfan unique, unparalleled and premier among the rest of the books published so far on the topics of spiritualism and Sufism. These two secrets are, concentration on the personal name of God (Allah), and the method of invoking the inmates of graves, after acquiring these two rare secrets no wise person can be disobedient, neglectful and unfortunate. Along with this it also exposes and uncovers the so called Muslim, classical and modern, vicious and insincere cults, scholars and philosophers along with pseudo pirs (fake preceptors) false sajjada nasheens (custodians of the holy shrines of forefathers). IRFAN opens the actual doors of Shariah (the religious law), Tareqat (the Path), Haqeeqat (the Gnosis) and Maripha(the Last Place). This book tells with proof that man’s worldly life is not everything, rather there is a world after death and dying is just a part of life. Irfan takes away the fear of death and presents it as a beloved entity.

Intentionally or otherwise, the world today is engulfed in a strange intellectual strife and insoluble mental enigma. To overcome this conflict, we must take practical steps toward creating a true conception of God in the minds of the people and to impress on their memories the necessity of religion, enabling religion and spiritualism to attain once more the preeminence that they previously enjoyed. In pursuit of that renaissance of religion, Irfan presents the exposition of two secret, rare, and closely guarded sciences and offers a vivid description of their philosophy. The first focuses on knowledge of concentration on the personal name of God (Allah), centralizing human thought and occult spiritual energies on one point to attain willpower and spiritual strength. The second invokes the inmates of the graves, calling on departed souls for wisdom. Irfan demonstrates that humanity’s worldly life is not everything; rather, there is a world after death, and dying is just a part of life. It seeks to remove the fear of death and reveal it to be a beloved entity. Written by Faqeer Noor Muhammad in the early twentieth century, this spiritual study provides a valuable compendium and unique record of religion, spiritualism, and the secrets of Sufiism.

Faqeer Noor Muhammad was born in Kulachi, Pakistan, in 1883. Due to intense ecstasy and paroxysms at Islamia College in Lahore, Pakistan, he adopted a reclusive lifestyle and became a mystic. He spent thirty years of his life at the mausoleum of his spiritual mentor and guide, the king of Gnostics, Sultan Bahu. After studying the books of Sultan Bahu, he created his masterpiece, Irfan (Gnosis).