My Life with God 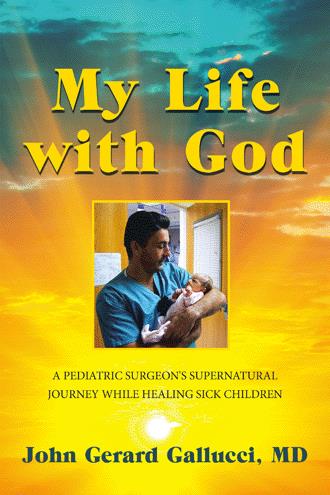 October 9th, 2014 while operating, I received an emergency call from my daughter. Arielle, sobbing terribly said, Dad! Anthony is DEAD! Arielle, what are you saying? Anthony! My Anthony! No Arielle, NO WAY! YES DAD! There was a terrible accident on route 22 early this morning! DAD, IT'S TRUE! Anthony was at a red light after eating with a friend at the diner. A tractor trailer plowed into him from behind at a high rate of speed, smashing his pickup into the concrete divider and rupturing his gas tank. The truck exploded with Anthony in it. He never had a chance. The highway was closed for 6 hours. My grief was unimaginable but I couldn't conceive of what his family was feeling. The dread was a crushing, suffocating tsunami with no end! Everyone loved Anthony. Nothing would ever be "OK" again! That night I made Anthony a candle and as I journeyed deeply into the meditative realms my cell rang abruptly snapping me back to the here and now. It was my friend and neighbor Jane Casale who is also a medium. Jane felt my turmoil and called. I told her a very dear friend had passed suddenly. I asked if she could help me help Anthony's family. She saw the accident and told me that Anthony was in fact there with her "in current"to recant the events. Anthony conveyed that he was in his truck talking to his bud through their respective open windows at the red light. It was very late and nobody on the road, so they thought. The next thing he knew, there was a great impact. He felt nothing, no pain. There was a second impact. He felt pain for about two seconds. At that point, someone shoved him from his right so forcefully that he was hurled out of his truck and onto the street. His truck had been spun around so that the driver's side was on the street side, the passenger door towards the concrete divider and his truck facing the wrong way on the highway. Anthony had no clue who shoved him like that; all he knew was that when he stood up he saw his truck engulfed in flames, but it looked as if he were still in it! Anthony immediately protested furiously over what he saw, but there were two people who explained to him that he couldn't go back. "He wasn't supposed to go back" and that everything would be "OK". After a period of acclimation, Anthony settled in with family members on the other side. His beloved grandmother who had recently passed and left him so brokenhearted was there with him. There is no linear "time" on the other side so what was all day for us in the physical realm was but an "interval" enough for him. Anthony is with loving family members who know him very well, in a place he had originally come from. In fact, he is "home" and his message is that he is better than "OK" but very worried over his family and friends.; Jane had not been told of the details of the accident; she knew nothing. She was given the details by Anthony. I thanked her for her help then sobbed and prayed myself to sleep in my chair in front of his candle. I woke up an hour later and went to bed, falling into a deep sleep. At around 2:30 am, I awoke to a bright light shining through my window shade across from the foot of my bed. The room was dark and there was no light coming from the other window on the same wall. The light got brighter and brighter and came right through the window and shades, filling my room with incredible brilliance that forced me to look away. As it came closer to me, the source changed from a blinding light into a beautiful, slowly turning, illuminated ball. It stopped directly in front of me as I sat up straight to address it. I was face to face with this magnificent energy source which revealed itself to be a four to five inch brilliant cluster of diamond-like crystals. It was slowly spinning and turning as it emitted the most incredible light and LOVE I had ever seen or felt before! This spirit entity had seen my lament and heard my prayers. It knew my intent and how broken my heart was for Anthony and his family. I telepathically blurted out, "I want Anthony back!" I slammed my fist onto my bed repeatedly! Anthony's family wants him back! Arielle wants him back!" There came a crystal clear revelation from this Heavenly diamond-like brilliance that this, in fact was Anthony! I was given the privilege to see Anthony as his Heavenly "light energy form"! I was witness to the merkaba within him! I was witness to Anthony's "God Center"by which we are all made in the image and likeness of GOD! It is the very Divine light that we shine into this dark world yet are completely unaware of with our physical earthly eyes! With this revelation I fell into an ecstasy and became completely transfixed upon this Heavenly light. Anthony had given me a brief glimpse of what we ALL come from and what we ALL eventually return to. We are ALL a brilliant spark of God's love and light. God is love and light and so are we! Anthony was from God and he returned to God. He let me know that he is where he must be and that his family will be just fine. He acknowledged that he will always be Anthony Mascia, son, grandson, brother and friend. He will always be very close to his family and for that matter will never leave any of us. He also made it very clear to me that this wasn't over. One day, Anthony will be back!

Dr. John Gerard Gallucci believes true healing occurs by allowing the energy of God and the Holy Spirit to run through him and into those to be healed. In his pediatric surgery practice, he heals through the Holy Spirit every day. In My Life with God, he presents a compilation of against-all-odds spiritually and metaphysically-based true stories that demonstrate how God and the spirit move in and work through our lives. Gallucci offers a supernatural journey of healing the heart, mind, body, and soul. He shares the essence of what it means to live and work in a spiritual-metaphysical world of healing while rendering gold standard surgical care to premature infants, babies, and children. Each true story illustrates what can be accomplished by allowing God’s river of love and light to flow regardless of how difficult some challenges may seem or how improbable finding a silver lining on the darkest cloud may appear. In My Life with God, Gallucci shows how if you see others with the eyes of your heart and offer them love and compassion, you will render true healing.

John Gerard Gallucci, MD, is a board-certified, award-winning pediatric and neonatal general and thoracic surgeon who has held the designation of “Top Doctor” in his home state of New Jersey for many years. He is also a reiki master, energy healer, and prayer warrior who genuinely uses the energy of the Holy Spirit to heal families’ hearts, minds, bodies, and souls.