A Memoir of a Breast Cancer Journey with Two Perspectives

by Caroline Logan & With Martin Logan 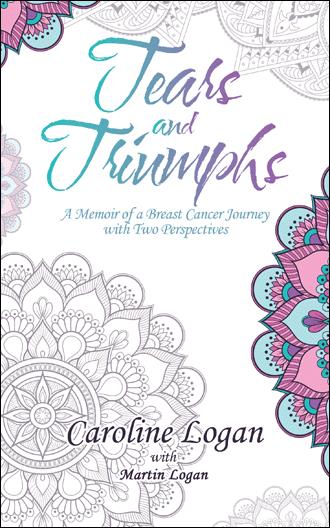 So with the children seated and their nanna and Martin there for support, I began to tell my beautiful children that I had recently had a doctors check-up and that the doctor had found a lump in my breast. Jade asked, “Is it cancer?” I looked at them both and replied “Yes.” My children’s faces crumbled a bit, as did my heart and they looked towards Martin and their nanna for their reactions. To ease their shock and bring about some positivity into the situation, I let them know straight away that the doctor has said she believed it was caught early, so it was called Early Stage breast cancer. These words were my Hope, I was pinning my life on them. I wanted the children to have that hope as well. I sat on the lounge and my seventeen-year-old baby girl came and cuddled me. Jade was looking up into my eyes with her beautiful blue eyes, as she had so many times in her life. “Are you going to die?” she asked me. The tears are streaming down my face as I write these words now, as I can still see the pain in her eyes, as she wondered if her mum was going to live or not. My words to her were “I really don’t know, but from what the doctor says, it was caught early which gives me a good chance and that’s what we have to hold on to baby."

This book is an in-depth behind-the-scenes look at the struggles of life after a devastating cancer diagnosis. It encompasses all stages of the author’s breast cancer journey—the highs and lows, ups and downs, and ins and outs. It is a deeply personal and honest firsthand account that includes the perspective of a shattered husband who refuses to accept this shocking diagnosis.

An avid reader herself, Caroline offers her readers Hope and a Light at the end of the tunnel. Through this intimate, informative and often humorous account of her experience with Breast Cancer, Caroline allows readers to get to know her and her family, as they navigate their way through this devastating diagnosis. Caroline Logan lives in Perth, Australia with her husband Martin. Visit our Facebook page: https://www.facebook.com/pg/TearsandTriumphs/about