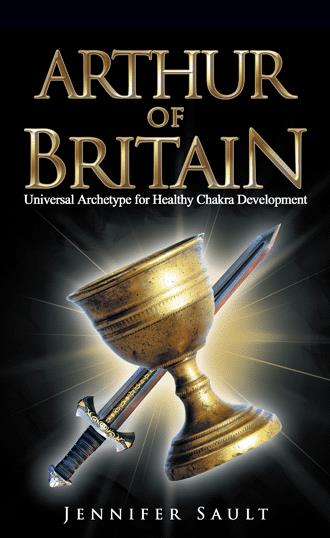 In the Arthurian myth we have an example of what a healthy heart chakra looks like: a balance of masculine and feminine, yang and yin; a balance of assertiveness and nurture; acceptance without judgment; and unconditional love. If we discard the medieval frosting regarding the status of women we find women who are strong, in positions of both temporal and spiritual leadership, as well as creative, intelligent, and nurturing. And in Arthur we have an example of a male whose feminine energy is developed and in balance. Arthur is a warrior and a brilliant military strategist; and he is also just, kind, compassionate and respectful. He knows how to wield the sword to protect his kingdom from threat, and he also knows how to nurture the kingdom in time of peace.

The theme of yin and yang balance is woven into the structure of the myth, both in the characters and situations, and in the symbols of the sword, the round table, and the Holy Grail. It is Merlin, archetype of the divine masculine, who places the sword in the stone and engineers the test of Arthur’s kingship; who gives him, in other words, the right to rule. And it is the Lady of the Lake, archetype of the divine feminine, who gives him Excalibur, the sword of power that gives him the means to rule. The round table, Arthur’s symbol of justice and equality, is a gift from the feminine: Guinevere. The martial arts vanquish the invaders and bring peace to the land, and the feminine arts influence the quality of that peace.

Arthur’s example of a healthy and balanced heart chakra survives the medieval doctoring of the legends. In the context of the time, we would expect the response of a High King to the adultery of his queen with his closest friend and Companion to be one of anger and revenge, a shadow second chakra response. The erotic and romantic love of the second chakra, if it does not encompass also the love of the heart, needs to possess the beloved, to be the exclusive lover, and when betrayed responds with jealousy, rage, perhaps violence. We would expect that in a culture dominated by second chakra attitudes towards sex and romantic love—as the medieval culture was—a man who did not respond in that way would lose the respect of his warriors and of his people.

But this does not happen. Arthur loves both Lancelot and Guinevere, and he views their love for each other with the compassion and understanding of the heart. Operating from his fourth chakra, the love he bears for both of them is compassionate and forgiving, and for his generous heart Arthur is loved, both by his own people in the legends, and by the legions of readers of the legends down through the centuries.

Again, contrary to accepted practice, Arthur continues to honor Guinevere even though she does not bear him an heir. We can appreciate how radical an attitude Arthur’s is by comparing him with, say, Henry VIII, some thousand years later, who divorced or executed four queens in his quest for a son and heir. (One of his six wives died giving birth to the son who would have saved her, and the sixth outlived him.)

Among the Celts women were of equal standing with men, and if Arthur as some scholars have suggested lived in the north of Britain, behind Hadrian’s Wall, his attitude towards Guinevere and Lancelot would not be so surprising. But if Arthur lived in the south—in the land of Tintagel, Castle Cadbury and Avalon—then he was a Roman Briton, product of four hundred years of assimilation. For him to continue to honor Guinevere as his queen and not hide her away in a monastery—in spite of her inability to bear a child and not to mention her love for Lancelot—was not in keeping with the dominant attitude. But then we are not talking about an historical document; we are talking about a myth, and a myth communicates its spiritual truth directly to the deeper levels of knowing within us. We do not condemn Arthur for being a wimp; we love him for his tolerance and understanding and we perceive those qualities as evidence of his strength.

If we look at the love between Lancelet and Guinevere as Arthur did, through the doorway of the fourth chakra, the rather than from the perspective of the second chakra, there is no betrayal, and no judgment. At the same time, Arthur knew that he lived in a predominantly second chakra culture. Others would see betrayal, even treason; they would judge, and would demand retribution. As long as the relationship between Lancelot and Guinevere remained between the two of them there was no problem. When it was forced into the open by the younger coterie of knights who were still operating from the second chakra, a second chakra response was inevitable. Arthur, like Arjuna in the Bhagavad-Gita, had to do his duty within the context of his times, holding himself apart as judge and letting events take their course. Guinevere was found guilty of treason and condemned to death by burning. She was rescued by Lancelot and they fled, she to a convent and he to his own castle.

The contrast between cultural morality, embedded in the second chakra, and the nonjudgmental acceptance of the heart, appears again and again throughout the myth. Uther lusted after Igraine and used magic and manipulation to bed her. The result was the conception of Arthur, light of Britain. The conception of Galahad has all the same elements of enchantment, trickery, and betrayal. Elaine disguised herself as Guinevere to lure Lancelot to her bed. He made love, so he thought, to the wife of his king. And yet Elaine knew, Malory tells us, “that same night should be gotten upon her Galahad, that should prove the best knight of the world,” because he would find the Holy Grail.

Myths are our collective dreams, our inspiration and our aspiration; they are the sacred stories that guide us in living a conscious life. One of the most beloved myths of the West is that of King Arthur and his Companions of the Round Table, and we find in this work that the spiritual teachings embodied in this myth are the same as those of the chakra system of the East. Both map the development of human consciousness from conception to self-realization. Arthur of Britain transports us to the landscape and the time of King Arthur while opening our hearts to the power of myth to transcend time and space. A retelling of some of the legends correlates the events of Arthur’s life with the physical, emotional, mental and spiritual challenges that he, and we, encounter at each chakra. Guided meditations use the archetypal symbols in the myth to help us negotiate those challenges, and bring into consciousness the wisdom and self-healing power that we all carry within. This work is a valuable contribution to both the spiritual and mythological literature as it provides a bridge between the two and highlights the similarities, rather than the differences, of diverse traditions.

Also, this book is available on Amazon and Barnes & Noble.

In this work Jennifer Sault draws on the experience of a long life lived well and with curiosity. She spent the decade of her twenties in Rome, Italy, working with Jewish refugees and Holocaust survivors, a searing experience that was also rich in blessings. Her life in academia explored diverse areas of study and led to four master’s degrees in history, creative writing, education and counseling. She is bilingual in English and Italian, and has studied French, Russian and Spanish, in the belief that language is a window into the cultural soul. She taught Italian at Wake Forest University, and spent some five years in rural Costa Rica replanting the rain forest. She is a psychotherapist specializing in stress management and personal growth.