Say “No” Without Guilt

by Julie A. Hawkins 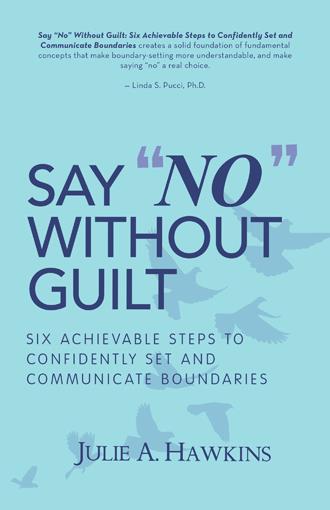 “It’s not the absence of fear; it’s overcoming it. Sometimes you’ve got to blast through and have faith.” —Emma Watson Chapter One Realization and Awakening Shannon stood in the open doorway of her home and sanctuary, feeling the crisp morning air stream in. Dwarfed by the massive doors and vulnerable in the narrow opening, she surrendered and breathed a sigh of relief; her stepson, Greg, was finally leaving. She was exhausted as usual, her constant, searing grief leaving her continually drained with only meager bits of energy emerging from time to time. Shannon hadn’t seen Greg in a couple of years. He’d moved to Oregon about five years prior to pursue education in the holistic-healthcare field and follow in his father’s footsteps. His father, Louis, was a natural healer, and in addition to being educated and trained as a chiropractor, he was also a Naturopathic Doctor. A year into Greg’s program, he informed his father he’d dropped out and was now headed in a different direction professionally. He stayed in Oregon, much to his father’s frustration, and took up carpentry and cabinetmaking. Greg informed Louis he “felt called to this dying art.” Louis and Greg had drifted apart over the years, and it was painful for Shannon to watch the disintegrating relationship. She chose to stay out of it. Now, because of the unique circumstances, she had looked forward to her stepson’s visit, but the days leading up to this visit couldn’t have been more different from ones of years past, or more difficult. Five months prior to Greg’s homecoming, Shannon’s life took an unexpected turn. Louis, her business partner and husband of many years, lay incapacitated in the spare bedroom with a debilitating and painful back problem. Being a chiropractor, Greg insisted he knew what the problem was and she didn’t have the bandwidth to argue with him. Shannon had been consumed for the last two months with taking care of a disabled Louis and running herself ragged, working to earn a living and manage their household, which included three cats, two dogs, and a bowl of fish. She felt stressed out and overwhelmed, not just from the doubled workload, but from her deep worry and concern over Louis’s condition. Greg now stood several feet away from her on the wide front porch. It was a peaceful morning on the street where Shannon and Louis lived. This generally quiet neighborhood stood out in stark contrast to Greg’s burning rage as it quickly escalated out of control; his tall lanky frame seemed to grow larger along with the tenor of his rage. Greg’s raging episodes were not unfamiliar to her as he’d been a troubled and defiant teen, but the timing and impact of this incident were pivotal and life-changing as had been the preceding five months. This was a year of life-altering “firsts” that would forever change Shannon’s life in unfathomable ways. As Greg’s anger grew, Shannon found herself struggling to keep control. Somehow though, she found that the angrier and more out of control Greg became, the more her own inner calm grew. Greg screamed at Shannon, “This is all your fault…I can’t be here anymore!” Shannon was bewildered, as she had no idea how she could have possibly caused Louis’s illness. Thankfully, her inner calm had a life of its own and overrode the anger wanting to erupt in response. She finally calmed Greg enough to get him and his duffle bag into the waiting car that would take him to the airport. She watched her stepson defiantly leave without a word. She felt heartbroken all over again. Shannon had married Louis when Greg was a toddler; his biological mother—an addict, had been out of the picture for years, leaving Shannon to become the only mother Greg knew. Shannon had stepped up to the role of mother and loved him as though he were her own. As far as she was concerned, she was his mother and whatever problems Greg had with Louis weren’t her fault. The family dynamic while better than most, still had its dysfunction. Everyone seemed to have high expectations of each other, and Greg made it clear Shannon and Louis rarely seemed to meet them. Regardless of how hard Shannon and Louis tried, their efforts often seemed to fall short in Greg’s eyes. Shannon felt that Greg took them for granted, as many teens are prone to do. What was sorely missing in their lives was consistent discipline, healthy boundaries, and at the very least, decent communication. Greg always felt his father gave much more time to his patients than to him, and he resented Louis and by default Shannon, for this. Shannon seemed to overlook this much of the time and gave into Greg’s demanding behaviors. It was in the exhausting, hazy hours and unrelenting emotionally gut-wrenching days, weeks, and long months that passed after the front-yard confrontation, that Shannon realized how crucial it now was that she set firm boundaries with Greg. She felt as if her very survival depended on it. However, she had no clue as to how to do this.

Julie A. Hawkins was a lifelong people pleaser until the unexpected death of her partner, Chris, prompted her to begin setting and conveying proper boundaries. After serving as a life coach and Neuro-Linguistic Programming trainer for nearly two decades, Julie developed a six-step system to help others say “no” without guilt. Today, Julie lives in Silicon Valley where she conducts trainings and enjoys her human and furry friends.