One Soldier’s Path to Peace 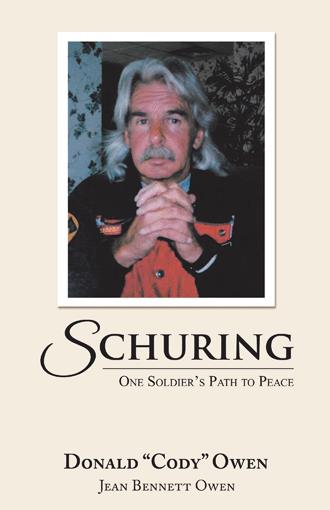 Schuring…one soldiers path to peace One soldiers struggle to deal with the devastating effects of war led him on a thirty year search for peace of mind. The experience of combat in the fields of Vietnam left him emotionally disabled and powerless to assimilate into a life into a normal life once he returned home. He was ravaged from Post Traumatic Stress Disorder (P.T.S.D.) so severe he could no longer get a nights rest without awaking to flashbacks of combat. When he arrived home he did not arrive to a hero's welcome but to citizens who to spit on him as he disembarked. He turned to alcohol to “shut off” his mind and soon became one of the many walking wounded who became homeless and destitute for some relief. Talking about his experience with other vets did not relieve the trauma and only caused the flashbacks to become more real and animated. He felt lost, abandoned, betrayed and bewieldered. What he realized was that the greatest thing he had lost while away fighting for his country was his connection with his God. While surviving in the midst of combat his belief in a loving God had been challenged beyond his belief. He missed his regular communing and prayer. He was busy surviving one day to the next. The experience of loss he witnessed on a daily basis became unbearable. At one point he carried two dead infants he had come across in a village around for days. He felt responsible since he had been the one who had given the coordinates for his forces to send in the bombing of the village. Combat was a never ending nightmare. Upon his return home he began again to question his God. He drank to drown the memory of Vietnam and continued down this road for many years, never giving up hope that he might someday find the peace he so earnestly desired. Cody continued to look for ways to reconnect to a life with meaning and purpose. He took coursework in counseling and connected himself to a ministry working with people with disabilities. He ultimately became a Certified Nurses Assistant working with people with dementia. He learned he had a passion for bicycling. Since he did not have license to drive his bicycle had become his constant companion. During one of his rides home in Grand Junction from work in Fruita he received an answer to a prayer that he be shown how he was to be of service to others. God asked that he put his passion for bicycle riding to good use by riding for a cause. He was to ride his bicycle around the state of Colorado and share his experience of Alzheimer's Disease (A.D,) and dementia to benefit family members who were suffering. Soon after he moved to Denver to work and met Jean, who had returned home to care for her father who was suffering from Alzheimer's. When the two met they knew instantly that they had been brought together to do this work. Jean possessed the event planning skills which Cody lacked and Cody was gifted with the ability to promote the event and garner sponsors. Within a month Cody and Jean were on the road ready to do their first of six years of riding around Colorado. It became a 2,000 mile bike ride event with Cody as the solo rider and Jean driving the sag wagon. Every other day they would set up an educational table in front of a grocery store to share what they knew about A.D. and to refer people to help. On the off days Cody would ride 80 -100 miles to the next stop on the tour. The event took three and one half months to complete during which they handed out thousands of brochures they had created containing vital information about the disease and where to get help. This was the beginning of what was to be a fourteen year marriage and service work together. The event was named Ride for a Cause. Cody and Jean took on other causes, namely Spina Bifida, which was close to Cody's heart since those affected were born of veterans who had been exposed to Agent Orange, like he had been, during the Vietnam war. Cody had learned the value of service again, this time under peaceful circumstances. The long hours riding to the next stop allowed him to renew his communion with God and receive the blessings of meditation. He rode with the mantra God had given him; Schuring…only God, only Love, only Forgiveness and only Service. In the seventh year Cody suffered from a blood disorder which caused blood clots to form in his right leg, ultimately causing him to have it amputated. His service work took on new dimensions as he became disabled. Learning to live in a wheelchair became a new challenge and one that he took on courageously. He became a disabilities consultant for a transit agency in the local community and an advocate for others with a disability. He was given the opportunity to serve his home town as a Crossing Guard, Trails Committee and accessibility consultant. His life had come full circle except that he was still suffering from P.T.S.D. He started meditating again which proved to be a saving grace. This was the point at which he decided to write down what was working for him and share it with other vets. In 2009 he learned he had cancer, which was really the latent affects of agent orange exposure. His last months were spent writing down his meditations onto 3 x 5 cards. Jean and he spent countless hours refining the work. He was able to review the final draft of the book three days before he died on June 14th, 2009, fourteen years to the day when Jean and he were married. Jean promised Cody on his death bed, she would complete the work and get it published.

Schuring was a mantra given to me in prayer which restored my ability to reconnect with God and find purpose for my life. For many years after my Vietnam war experience I struggled to find peace. I have met other combat vets who also suffer from PTSD and the trauma of their wartime experience. I am sharing my meditations in hopes that they will be used by other vets and their families who still suffer from the effects of combat.

Whether currently serving in wartime, active duty or at home I pray these meditations will facilitate bringing vets closer to their estranged families, Country and their God (or what ever higher power they believe in). I have always believed in God therefore my meditations address God as my higher power. It was not my intent to impose my personal beliefs upon others but instead to share my experience as a result of using these meditations on my daily life.

The meditations can be used in any order. I chose the smaller size format to enable the book to be carried in a rough sack like a field guide. Since the meditations are short and only take a portion of the page I encourage the person using them to journal in the extra space on each page or to write thoughts or comments. In this way the meditations, while simple, can be profound and lead to healing on many levels. I have kept a daily journal to delve into deeper insights and carried the meditations over to 3" x 5" cards I created for each. This books represents only a sampling of the over 250 individual meditations I ultimately had in my "deck" of cards. Start wiring your own using these as an example. The more personal the meditations become the sooner the healing can begin.

God bless my fellow veterans and their families. May you find the peace you deserve.

Cody Owen was born into a middle class family in Boulder, Colorado. He was athletically inclined and excelled in golf. He had an older sister named Sandra. He was brought up with a belief in God and an understanding that he was his brother's keeper". At eleven Cody's father suffered a major stroke with left him unable to speak. This was a great loss to him since he was very close to his father. Cody took a job at a local grocer to help his mother. He often said his parents were his heroes…his mother gave him faith and his father gave him courage. He joined the U.S. Army in 1965 out of a sense of duty to his country. After boot camp he was shipped off to Vietnam. During his first month in country he experienced the devastation of war in the la Drang Valley battle. This engagement would change the way armed forces would fight the Vietnamese. It left him in a constant state of hyper vigilance. Upon returning home, Cody realized how difficult the transition to civilian life would be. Even before setting foot on U.S. soil angry war protestors spat on him as he disembarked. This trauma was lasting. He felt lost, bewildered and betrayed. The country he had fought for had thrown him away. The PTSD he was suffering from was not acknowledged and was dismissed by vveteras medical personnel. He did not find comfort in sharing his experiences with other vets. Instead it brought on more vivid he used flashbacks. He used alcohol to numb the pain. He stayed drunk and became homeless. He was among the many walking wounded living as an outcast on the streets of America. It was many years before he would live a productive life due in large part to employing the meditations he has shared in his book. Cody died in 2009 living with PTSD and from cancer due to exposure to Agent Orange.