Learning to Slow the F*ck Down

And Other Life Lessons 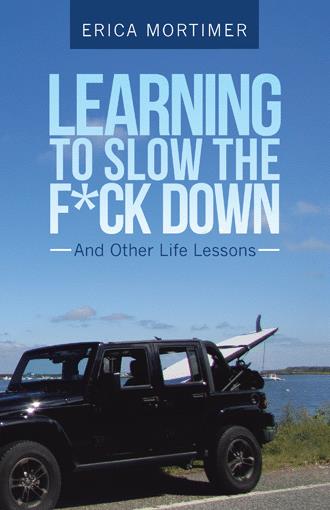 Looking back, I was basically rushing to remain average, doing nothing well, with the focus of a puppy, bouncing from one thing to another. I know now that, there is a false sense of accomplishment that comes with staying busy, constantly doing, and always striving. There are moments in our lives that stand out as pivotal, turning points. These moments don't always make sense when you are sitting in the middle of them but looking back we gain clarity. I see now what I didn't see then. Like you, I have had number of these moments. One stands out and has become the basis of this book. Several years ago, I would travel to Florida for work. I would always make a point to visit one of my colleagues who owned a treatment center (I had not started Center for Healing at this time in my life). The first few minutes of every conversation were always the same. He would ask what I have been up to since we last talked and I would quickly, with excitement, rattle off a list all my innovative ideas and projects that I was either working on or that I wanted to work on. From there our conversations went like this: Sherief: (leaning over his desk with authority, looking me straight in the eye, piercing my soul, and saying real slow) "Erica, slow the fuck down!" Me: (Squirming in my seat) "I know Sherief; I am". Sherief: "You don't know. To know and not do, is to not know. SLOW THE FUCK DOWN!" I wish I could say that I understood the first time and that we only had that conversation once. But that is not the case, we had this same conversation countless time. Pretty much every time that I saw him. I guess I never really understood what he was saying. I thought I did. At the time, I couldn't see what he was seeing. I couldn't see that I had set myself up for failure time and time again. I couldn't see that I was creating more chaos. It was only after I learned to "slow the fuck down", that I understood what he was talking about. I hadn't spoken to Sherief in years, but last year I called him and thanked him. I told him that I finally understood what he was saying. With learning to “slow the fuck down” came a newfound awareness. Slowing down allowed me to look within. Previously, my focus had always been external. This awareness was more of an awakening. And this awakening didn't happen overnight; it has been a process that has taken place over several years and has not ended. This awakening started as I began to understand meditation and mindfulness, which were such foreign concepts for me that I had a hard time wrapping my head around the idea of mindfulness. For me, there was nothing natural about either meditation or mindfulness. I remember one of my coaches telling me to take five minutes and pay attention to the spaces between my thoughts. My reaction: "What the fuck?! Are you kidding me?! My thoughts have thoughts. There are no fucking spaces!!" I began to noticed that I was thinking several thoughts at the same time. My brain was always in overdrive. It was like a three- ring circus in there. Thoughts swirled through my head every waking moment. I am not even sure that my brain took a break at night. It was hard for me to fall asleep because of the racing thoughts. When I did fall asleep, it was common for me to wake up in the middle of the night with what I thought to be another great idea. My head was so filled with my own chatter that there was no way to get still and quiet. Noticing the spaces between thoughts was not an approach to mindfulness that was going to work for me. So, I had to work to find strategies that I could effectively use. Sometimes the only thing that I could do was just breathe and pray. Prayer seemed to be a way control, or at least organize some of the noise in my brain. I guess you can call my "prayers" focused or more intentional chatter. I even began journaling to slow and control the flood of thoughts that rushed through my head.

Reading “Learning to Slow the F*ck Down” is like sitting down for a cup of coffee with a good friend. A friend is who is engaging, insightful and playfully irreverent. This book offers a raw and real look at the journey to mindfulness. A licensed mental health clinician, Erica recognizes that many people are afraid of change, of being alone, of living, of loving, of embracing the power within. Erica draws on both her professional and personal experiences to inspire others and provide a guide to inner peace. This is not your average book about meditation, it is more than that. In “Learning to Slow the F*ck Down”, Erica weaves analogy with insight to show how slowing down and being present can increase your productivity, joy, peace and pleasure. Erica shows how loosening your grip on life will allow you to move from a place of fear to a place of flow.

Erica Mortimer earned a bachelor’s degree in psychology from Clemson University, a master’s degree in counseling from the University of South Florida, and a variety of professional certifications. Having worked in schools, prisons, and mental health facilities, Mortimer brings to the table a unique perspective to mental health and addiction treatment. She is the founder and CEO of Center for Healing, a drug and alcohol treatment center located in New Jersey.