Proving the Former Life of a Ghost 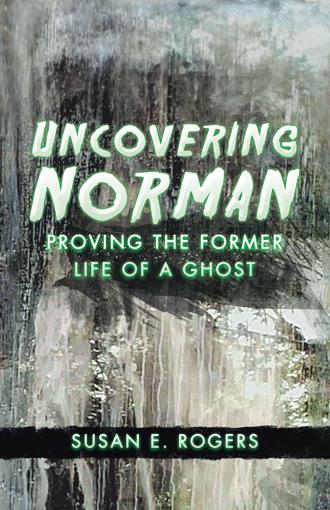 By November, Norman had become much more active when I was at the local club on Sunday nights. He told me he liked it there, liked to listen to the music. He said he spent a lot of time hanging around there when he was younger. I could always feel his presence when he was there, though he never materialized in any way. A new electronic dart board was installed in the corner where I used to see his energy disturbance in the air, and I could no longer see anything there. I started to think of him as a friend, and I always felt a bit disappointed the few times he didn’t show up. My boyfriend, Hardy, knew when Norman was there and when he wasn’t. I always told him every time I had interaction with Norman, and every bit of any communication I had with him. I think I wanted Hardy to be a witness to my contact with Norman. Maybe even then I knew that I wanted someone who could later say, “Yes, that happened then. I was there and she told me.” The Sunday after Thanksgiving, Norman decided to give me a little tidbit of specific information about himself. His message was that he wanted me to truly believe he had been a real living person. I think he wanted to test me a bit, too, to see if I believed in him. Did I care enough to make him real again? Absolutely! That night, Norman told me he was raised by an uncle and aunt and grew up in Ocean Grove, a small area within the town of Swansea, the town I live in and where the club was. He also said that he joined the Navy as soon as he was old enough, but returned to Swansea when he was discharged and never married. The very next day, I was on the computer searching for my friend. Using my usual genealogy websites, I searched through the census records for a Norman in Swansea listed as nephew. There he was! It didn’t take long to find him in the 1940 census. There were only two Normans listed as a nephew in all of Swansea for any census year, and they were both in 1940. My instinct told me which one was correct, or maybe it was direction from Norman himself. The one that I believed was my Norman lived in the Ocean Grove area of Swansea on Puffer Avenue, not far from our local hang-out. He was listed on the census as nephew of Bruno and his wife Mary, but had a different surname. They were the only three in the household. From the census information, Norman was 12 years old, was in the fifth grade of school and was born in Massachusetts. His uncle was 67 and his aunt was 61, and they had all lived in the same house in 1935. I did do a little more research on the other Norman, just to make sure. In the 1940 census, that other Norman, who had the same surname as his uncle and aunt, was born in 1918. Checking the 1930 census, he was living with his parents in Rhode Island at age 12, so he really hadn’t been raised by his uncle and aunt as my Norman said he was. My Norman, in the 1930 census, was living with the same uncle and aunt as he was in 1940 in the nearby city of Fall River at age 2. I knew I had the right one. Norman was real and I could prove it! He was the real spirit of a past living person. That little bit of proof from the census record not only validated Norman, it validated my psychic ability as well. I wasn’t just making things up. It wasn’t just my imagination, or talking to myself in my head. It was proof that the Spirit Norman had undeniably existed as a real person in the real world, and it was also proof that he interacted with me from the spirit world.

Most people during their lifetime experience some contact with the spirit world. Their reactions can vary from laughing off such nonsense as coincidence to praying for the demon to leave them alone. But what would you do if a ghost wanted to be your friend? In this, the author’s first book dealing with the spirit realm, she relates the true story of Norman, a ghost who has returned to become her spirit guide, protector, and friend. The story follows the first few years of their friendship and explains how the author uses her extensive experience with genealogy research as a way to prove and validate that Norman the Ghost actually existed as a real person. She successfully searches out the details of his life using clues that he gives her in their psychic communications. Along the way, they both learn some very valuable life lessons as they come to realize the reasons they are together in their current incarnations as well as the fact that they have been together in past lives. In the second part of the book, the author discovers one of those past lives when she and Norman were together as siblings. Once again, using her gifts in accessing the spirit realm and the Akashic Records, the author goes back with Norman to this past life in medieval Germany. Using the messages and information they receive in multiple visits back to this life, the author uses her research skills and techniques to find validation of multiple facets of their life together during that time.

Susan Rogers (also known as Lady Airmid in the psychic community) has been actively sharing her psychic gift with others for the past several years. Although aware of her abilities from early childhood, it was only years later, after thoughtful meditation and attunement, that she received the spiritual direction and guidance that she should offer her healing and inspirational abilities to the world. Retired from a lifetime career helping others as a Social Worker, Susan has transferred her healing and counseling skills to this next phase of her life. She is proficient in mediumship and divination, and uses her gifts with methods such as Tarot, Tea Leaves and Akashic Records readings to provide guidance and inspiration to her clients. She holds certifications as Reiki Master and as Herbalist, as well as basic and advanced Aromatherapy and Crystal Energy Healing. Susan has always had a special ability with past life readings and ancestor spirit guides. She has extensive experience with genealogy research, including writing and editing family-specific books and articles. It seems the natural next step, therefore, that she is now merging over 37 years of ancestor searching skills with her psychic abilities. Her ability to communicate with Spirits, in tandem with her genealogical methods and resources, can assist others to find and work with Ancestor Spirit Guides, resolve issues rooted in past lives and provide reaffirmation of other Spirits and Guides. Susan lives in Southeastern Massachusetts with her partner. Together they enjoy music, travel, friends and just having fun in each other’s company.