Bruised but Not Broken

My Life with a Sociopath 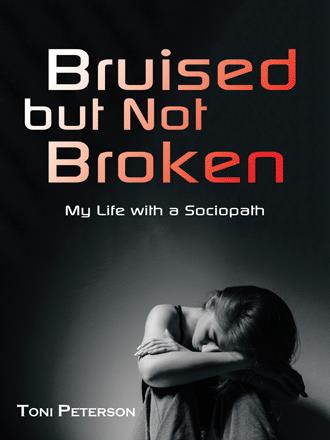 Once you know Frankie as well as me, you will discover how he can spin into another personality as quickly as a greased pig at the fair. One minute you think you got him figured out and what he wants, the next second it's an entirely different person. The switch can take place smack in the middle of a conversation. When you observe him, you can see the physical change that takes place. His eyes change color. They are naturally hazel, but when he assumes another personality, they turn black. When he described to the shrinks about the time he was strangling me, he told them he was watching the entire event from up above. While he was choking me, with his hands around my neck, he was looking down from up above somewhere and swears he couldn't do anything to stop himself. It was some type of out-of-body experience. That being said, the entity that the medium spoke of, and his out of body seem to me as the same thing. Some might even call that possession. Before our marriage ended, we were going to three psychiatrists, and I learned they were talking to one another about this. Back when he had been in the room locked up, he had threatened suicide again one day while my daughter was present. The shrink called and asked if he had been called into work that day, and I said no then began to tell her what's going on. She said he had called to lie to her about cancelling the appointment. She said it was her duty to call the police for suicide, so she did. He was brought back awhile later after police found him on headed to Vegas with three thousand dollars to go party! He nicknamed the shrink "man hater" and refused to ever see her again. When he lied to the shrinks, they put him into a "no-no" file. This meant he did not want treatment and was lying to them. Upon three times, they would refuse him from then on for the entire state. I told my shrink, things were not right with the other shrink who was doing the marriage stuff. She is the one I had known for several years, that Frankie was playing games with one of the other shrinks. Frankie had told me he had years of experience bullshitting shrinks. Frankie had said some things that weren't true like I'm an alocholic and the crazy one. When I arrived at our appointment, the doctor was all over me. I told him that he didn't know what he was dealing with when it comes to Frankie.

Toni Peterson is a Certified Reiki Master, poet, and the owner of a Non-Profit Organization.