Biography—Memoir of a Quiet Stalwart 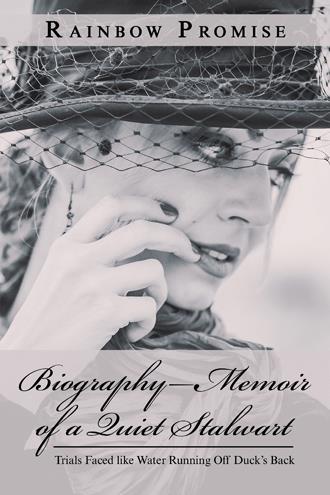 I wrote this Memoir from the core of my deepest being. I was greatly influenced by the way Mother went about creating and designing patterns that wove her way through her journey in this life. Especially after my father died, this inwardly strong woman stood up to circumstances like a Captain Of a ship. Never speaking except to say what was wrong or right, she went with the tradition that adult things belong with adults and that children were not to be involved; since it was not their problem. It was an adult duty to bear all things, looking to God to show the way. Her smile was always there. No one ever knew what hardships she went through, until the later years when she revealed some of her medical problems. Doris Joyce McCammon was a humble person who was very helpful to those that she encountered. She was a Nurse by profession and could be called upon for assistance even in the wee hours to neighbors and family that were ill. She delivered babies during times like these before the Ambulance came. She worked in the rural areas of Guyana as a Rural Mid-wife, before doing Geriatric Care. She later continued this aspect of care with the Elderly as a Home Health Aide, including Veterans with no legs. Doris worked in this capacity for 20 years in the United States and resigned at age 72. Information in this Memoir is well researched. The author uses background knowledge, past skills and experiences to tell this story. A school teacher who moved up the ranks to the Administrative Level as well as a Nurse who achieved status from Novice Prudent and Cognizant in many areas in the Nursing Career including Supervision.

Doris accepted all that life threw at her – hardships, bias against women, a new career and raising six children. There were misconceptions as to who she really was. If she was ever devastated her broad smile was a true mask while going about her daily tasks. When her life partner took ill and later died, to the surprise of many, a quiet stalwart formidably emerged and “water” ran off her back like that of a duck!

I am a former teacher, now a Nurse. I wore many "hats" from novice to proficient and even administration in both careers. I blog on websites like Facebook, Twitter and Instagram. I currently write poems internationally on a site called PoetrySoup and Original Poetry.com. I have entered many poetry contests. I also entered International Contests and those for Magazines like Split Rock. Besides Poetry, I have also written manuscripts in other Genres such as Memoirs on ancestors, My Family Tree, Dolls: Ancient and Modern I am currently writing a Memoir on my mom who passed away last October 2017. I began writing my book on Poetry but, because thoughts and ideas about my mother keeps constantly flowing I needed to do one or the other. I have joined the recommended authors group among great people at the worldwide Author Learning Center of Balboa Press, where feedback and the sharing of experiences by known authors was a good help to me on my writing journey.