Healing at the Interface of Spirit and Matter 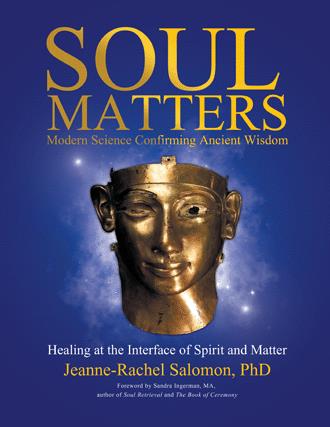 2.6 Here Is What I Contribute

My research findings have deepened the understanding of shamanic healing, in particular of soul retrieval. They contribute substantially to the emerging field of quantum medicine and to the shamanic healing modality itself. My work is based on two strands of empirical knowing:

The shamanic knowledge body (cosmology, philosophy, healing, divination, and so on), as it was developed, practiced, and preserved by the original peoples of the world, predates by millennia our current understanding of existence. Yet it refers to, and utilizes, the same prime forces of consciousness and intent that quantum physics speaks of: there is a living, minded universe in which each created entity is souled and is participating actively in the preservation and evolution of the whole; where thought is the blueprint for manifestation; where we are all creators of reality and thus responsible for our creation of such.

Original peoples understood the interconnectedness of all of life (one written proof of this is the Kabbalah). Quantum physics recently discovered it, and modern people are trying to come to terms with its meaning. For shamans, those keen observers of self and environment, this knowing is not a concept; it is a lived practice. My research shows how the example of shamanic soul retrieval functions inside the quantum aspects of reality: healing is accessed outside space-time and restores body-mind-soul equilibrium in space-time.

The two research methodologies I selected offer an unexpected intimate view of our body-mind’s exquisite functioning: its own mindedness and intelligence in plain sight. Nobody (to my knowledge) has done research by combining these two strands of shamanic knowing and cutting-edge scientific knowing:

The combined case studies offer convincing evidence that soul and body are self-aware and are acting accordingly.

The perceived incompatibility of shamanic thought and Western thought is not the fault of the shaman, it is rather a shortcoming of materialistic and linear thinking, which misses or neglects the fact of internal relationship, of which Danah Zohar speaks. Shamans are capable of linear thought; they do employ their left-brain capabilities as much and as brilliantly as the Western scientist does, but they are also aware of the relational holism (the interconnectedness) that exists on all levels and permeates all of existence.  They know it to be the binding force in all of nature.  This understanding is the reason, why in shamanic cultures everything that exists is accorded soul and is seen as being conscious.

Relational holism – it is fundamental to life, writes Danah Zohar. We find it already in the wave/particle aspect: each electron has both "thingy-ness" and "related-ness," the first due to its particle aspect, the second due to its wave aspect. It is the wave aspect that allows quantum systems to display the intimate, definitive relationship among their constituent members. This kind of internal relationship has been called relational holism (Zohar). I believe we can ascribe relational holism to all manifest life. There is integrity towards self, but there is also loyalty towards the whole – family, tribe, species, environment, ecosystem, nature.

Shamanic understanding of life seems to take such intimate, definitive relationship into account. Indigenous people are painfully aware of how our human actions influence and interfere with the environment.  Their concern is not only expressed because they depend on an intact nature, but because they intuit that nature and everything it consists of, has an a priori right to exist according to its own needs and desires.

And, of course, we are part of nature. Zohar gets to the point: "…we are, in our essential makeup, composed of the same stuff and held together by the same dynamics as those which account for everything else in the universe" she says, "our human wave aspects interfere with each other and with those in the natural world." Zohar appears to be echoing the Mayan's belief: Mayan wisdom maintains that all forms of life are the reflection of cosmic consciousness, and therefore are part of the same energy-entity. Predating modern scientific findings of matter being essentially energy, the Mayans, e.g. define 'spirit' as solar energy that manifests itself through the soul as life and material existence (Hunbatz Men). They call human beings children of the sun. Their word for the human body (mind included) is vessel of vibration. In this vessel, the Mayans insist, all the knowledge of the universe resides. This sounds as if the Mayans have a holographic view of existence (predating physicist David Bohm's ideas?).

Life is interconnected on all levels and information is exchanged between all the parts. And if all forms of life "are a reflection of cosmic consciousness" as the Mayans maintain, it follows that consciousness is a causative force. As such, it holds and dispenses knowing. This is also the contemporary quantum physicist’s position.

In shamanic understanding, trauma signifies soul-loss. To restore a person to wholeness, the shaman journeys into non-ordinary reality to retrieve the person’s lost soul essence and restores it to the client in ordinary reality. Shamans knew intuitively that existence is a product of consciousness, and that soul requires body to enter physicality, and body requires soul to express life. Yet, there is only a set amount of physical pain and mental/emotional disturbance that an embodied soul can tolerate. Out of self-preservation, a part of the soul leaves just prior to the trauma impact, and retreats - unharmed - into non-ordinary reality, away from physical ordinary reality. This book presents the author’s unique and creative research into the millennia-old shamanic healing modality of Soul Retrieval. Dr. Salomon found that the fundamentals of the shamanic healing method are aligned with quantum principals and that the phenomenon of soul-leaving and soul-returning happens on the quantum-level of existence. The results of her study confirm the relevance of quantum physics’ tenets of non-locality, tangled hierarchy and discontinuity inside shamanic healing. “Shamanism is not well understood by most people. Dr. Salomon has the intelligence and willingness to do the hard work to bring the validity and reliability of good science to the public. Her thoroughness of a difficult subject is clear and understandable. A must read for anyone interested in learning about the laws of the universe and how it affects each of us every day.” – Jeffrey L. Fannin, Ph.D.

Jeanne-Rachel Salomon, PhD studied anthropology and then quantum medicine, receiving her doctorate and PhD in natural medicine. She has studied with indigenous shamans and Western healers and has twenty years’ experience as a shamanic practitioner, focusing on soul retrieval for trauma resolution.