The Mystics, the Music, and the Mob 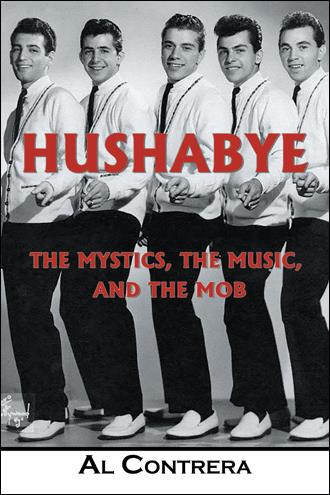 It seemed to be just another typical March day in 1959 when we went into Bell Sound Studios on West 46th Street off 8th Avenue to record “Hushabye”. We had no idea that this recording would change our lives forever. Until then, our personal lives were pretty much the same as before we’d gotten the recording contract. Bobby and I were working as draftsmen in an engineering firm on Whitehall Street in New York City and went to work together every day on the train. George had just started working for American Express in the city. Phil and Albee were working in construction. We usually rehearsed three times a week, with Bobby setting up the practice sessions. Most of the time, we went to Albee and Phil’s place on 86th street next to the Loews Oriental theatre. We saved the weekends for family and girlfriends. Gene, Elliot and Jim were already at the session. It was an impressive place. The lobby had pictures of so many famous people that recorded there. We were led into the main studio and were thrilled to see some of the same musicians that were at some of the other recording sessions that we’d done for Laurie. We met the same group at our first session with Judy Allen. Bucky Pizzarelli was on lead guitar. Al Ciaolla on rhythm guitar and Milt Hinton on stand-up bass. Panama Francis was there on drums. Up until now, we had done about five different recording sessions for Gene, and these incredible musicians were on most of them. We said our hellos to everyone and got to work. Gene explained how he wanted to get a kind of “Little Star” feel. Gene asked us to sing Hushabye a cappella for the band and then he played a bit of The Elegants’ “Little star.” He told Panama that he wanted to get the exact tempo and Panama said, “I got it, man.” Gene took out a metronome with which he cloned the exact “Little Star” tempo and played it for Panama. Panama just rolled his eyes in our direction, and we all broke out laughing, partly from being so nervous. It broke the ice. We weren’t pros, but we knew that you don’t tell Panama Francis how to play drums. The look on Panama’s face was priceless, and so was the look on Gene’s face, since he didn’t get it. Although Elliot’s charts had the basic chords, he relied on the musicians to come up with the right feel. He would know when it was right. He really did have sixth sense for music. Bucky took the lead, started with a real nice twangy guitar feel, and as if by magic, the others got into the groove. It was heavenly. I don’t think they even looked at the charts. Under the direction of Elliot, we started over and ran it down, off the microphones, while standing with the band. He made some minor changes and said to Gene, who was sitting behind the glass in the recording room, “Do you want to try one”? Then we heard Gene’s voice over the speakers. “Are you boys ready to do one”? We said “Sure-Yeah-Ok-yes and uhhu” all at once and we all laughed. Then we heard Jim’s deep sweet drawl, “OK boys, let’s calm down and do one.” Jim already knew, from the previous sessions, that if left alone we would just break out into laughter at every silly thing that happened. After some sound testing for each of us to get a good balance between the voices and our individual distance from the microphones, Gene announced, “‘Hushabye’ take one.” We sailed through the song; we could all see each other. It was not at all like the recordings that are done now, where the artist is wearing earphones for separation. Every microphone was open. All the voices and music leaked into each microphone so if any one musician or singer made a mistake we would have to start all over. I believe this is what gave vinyl that special warm sound. After the first take was done, we heard Gene on the speaker say, “All right boys, that was great, come on in and take a listen.” I thought that maybe one take was enough – but that was impossible. We knew from our past recording experience, with Gene and Elliot, that there had to be at least three, and there were times that we did ten takes. There were also false starts. If one person, musician or singer made a mistake, we all started over. I remember the time when we backed up Scott Garrett, one of Laurie’s artists. His lyrics were supposed to be, “Where there’s a moonbeam there’s a rainbow.” He kept singing, “Where there’s a rain beam there’s a moon glow.” After Gene stopped and corrected him for the fifth time we all lost it. Phil went to one knee and Georgie’s eyes were tearing. Albee and I could not look at Bobby, as his expression made us laugh even more. It took about 20 minutes to get ourselves back to normal. Even Gene and Elliot laughed, and that was rare. We restarted but we could not look at each other or we would crack up again. I laughed so hard I had tears in my eyes and a pain in my side. I miss laughs like that. Both Gene and Elliot were patient with us. But, when we were finally serious, it sounded great, and that was what they wanted, perfection.

An original founding member of the Mystics, author Al Contrera tells the true story of how five Brooklyn teenagers went from singing on street corners to fame in the fifties with their first hit song, “Hushabye.” Contrera, provides vivid and detailed accounts of the trials and adventures of forming a rock-‘n’-roll group in a neighborhood controlled by the mob. He narrates the story of the group’s formation, their recording and touring career, as well as their successes and heartbreaks, including the story of when the Mystics’ lead singer was arrested for being an innocent witness to a holdup and accidental shooting by a neighborhood gang and was mistakenly jailed for two years. Hushabye tells about walking the fine line between the music and the mob and how peer pressure and the temptations of fame changed their lives. Contrera offers keen insight and background into the sweet sound of the street corner doo-wop harmonies of the 1950s.

Al Contrera is an original member of the Mystics and continues to entertain audiences with the Classics, the Mystics, and the Brooklyn Reunion. During his career as a mechanical engineer, he worked on projects from New York City to Cairo and is currently working in New York City. Contrera has two daughters, five grandchildren, and two great-grandchildren and lives in New York City and New Jersey.