How to Achieve Financial and Emotional Independence 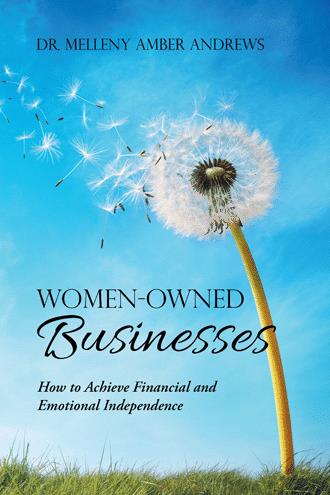 The book will offer many insights on the experiences of women entrepreneurs and factors that made them successful in maintaining their businesses, which would allow others to learn from those experiences and implement their thoughts on what helped them become successful entrepreneurs. Kepler and Shane (2007) stated that individuals became entrepreneurs for different reasons and that those reasons differed by gender. As opposed to men, women usually start businesses to achieve work-family balance and to have more scheduling flexibility (Kepler & Shane, 2007). This book identified their perceptions, thoughts, and experiences in the context of the few circumstances related to being an entrepreneur as well factors leading to their entrepreneurial success, and initial challenges they faced in starting a business which may be helpful to other women considering future businesses. Leaders of both small and large organizations may benefit from exploring the way in which women become successful in building a business and may consider the implications when dealing with women-owned businesses. Today, the term entrepreneur is no longer male dominated, and in the 21st century, the power of women has greater clarity (Narayanasamy, Rasiah, & Jacobs, 2011). Brush et al. (2006) noted the increase in women-owned businesses could be the new women’s liberation movement, underscored by the increasing trend of women entrepreneurs and women owning more than 30% of businesses in some countries. The findings from this book may possibly help organizational leaders identify opportunities for creating programs for women-owned businesses. “I am convinced that about half of what separates successful entrepreneurs from the non-successful ones is pure perseverance.” Steve Jobs Owning your own business has many obstacles, which include the challenges of identifying potential funding sources, especially for women. Research suggests that women-owned businesses do not perform as well as their male counterparts in business growth rate, profitability, and financial measures (Knotts, Jones, & LaPreze, 2004; Morris, Miyasaki, Watters, & Coombes, 2006; Watson, 2003). Specifically, there is evidence of disparity in a long-term viability and the overall success of women-owned businesses (Morris et al., 2006). A common motivation for women to leave their corporate jobs and become entrepreneurs is that owning their own business gives them greater control over their careers, more independence, and a way to escape the glass-ceiling phenomenon (Bosse & Taylor, 2012). Often in doing so, many women who are single head of households, especially those with children, face added challenges in making the shift to entrepreneurial activities. Bosse and Taylor (2012) suggested an unknown factor that may have caused many female entrepreneurs to fail on the road to entrepreneurial growth. There is a need to explore the perceptions, thoughts, and experiences of women entrepreneurs maintaining their businesses, especially single head of household women with children, to understand factors that might contribute to overcoming added challenges and achieving long-term viability and success in a woman-owned business. "This is what will change the world...a ground swell of people pouring their energy into manifesting their "preferred future" instead of being worn down by disillusion and disappointment." Molly Carlile, "The Deathtalker®" and international speaker/author Women entrepreneurs play an important and much needed role in the United States economy; therefore, women need support and programs to start, grow, and maintain their businesses so that they will not fail on their road to success. According to the United States Census Bureau (2010), women initiate businesses at a rate one and a half times the national average. In 2007, for example, women owned 7.8 million businesses and accounted for 28.7% of all businesses nationwide, generating $1.2 trillion in receipts or about 3.9% of all businesses nationwide (United States Census Bureau, 2010). There has also been stronger employment and revenue growth in businesses owned by women (Kephart & Schumaker, 2005). The research shows 10.6 million firms in the United States with 50% owned by a woman or women (Center for Women’s Business Research, 2006). Women-owned businesses contribute nearly $3 trillion to the U.S. economy, and employ 23 million people, which equates to 28% of all small businesses in the United States (Kalnins & Williams, 2010). Research suggests that women-owned business practices are usually unsuccessful, engage in weak management practices, and have low profits (Knotts et al., 2004). However, as Greene, Hart, Gatewood, Brush, and Carter (2003) noted, “Women entrepreneurs are increasingly prominent as employers, customers, suppliers and competitors in the US and the Global community” (p. 1). Women entrepreneurs are now important participants in the worldwide economy (Allen, Langowitz & Minniti, 2006; Brush, Carter, Gatewood, Greene, & Hart, 2006). "I never dreamed about success. I worked for it." Estée Lauder

Have you ever wanted to have a work-life freedom and a flexible schedule to be able to take care of family demands? This book explains the skills and attributes successful female entrepreneurs have and answers those questions! It explores the lived experiences, thoughts, and perceptions of female entrepreneurs who are single heads of households regarding their challenges, successes, motivations, networking, and giving back to their communities, which may help others find the ability to start their own business. All the women interviewed either left corporate America or were put in a position to provide for their families while seeking a flexible work-life balance. Do you need to care for a significant other and your children or participate in your children’s activities? It is extremely rewarding to be able to manage your schedule and work around your family’s needs. The ability to accomplish your business objectives while your children sleep at night is the best feeling of accomplishment ever. This book was written to inspire you to have the kind of lifestyle these strong women that were interviewed have and to take a leap of faith to create a business of your own. You can do it. Trust me! They did and are loving life with a new work-life balance.

Dr. Melleny Amber Andrews holds a Doctorate of Management in Organizational Leadership, A Master’s of Arts in Education/Curriculum and Instruction. Her expertise includes best practices for female entrepreneurs and has over 25 years of working in management for Corporate America.