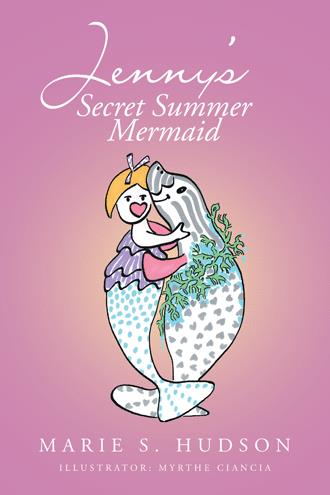 Grandma Bell kept trying to get Jenny's attention and get her to say which doll she liked best, but the only thing that caught Jenny’s attention was an animal poster on the wall at the back of the doll factory. Jenny had never seen this animal before, not even in her book of extinct creatures. “Grandpa, what kind of animal is this?” Jenny wanted to know pointing to the poster. “Oh you’ve found the manatees, that was going to be our next surprise. They have them at Homosassa Springs. But you can only find them in Florida, it’s one thing California doesn’t have,” Grandpa Bell teased Jenny. “What’s a Manatee?” Jenny immediately wanted to know. “Some people call them mermaids and some sea cows. You see the old sailors mistook them for mermaids when they saw them far out at sea, but today when people watch them eat, they think they look more like blubbery cows grazing. The only difference is this one grazes at sea, “Grandpa Bell explained carefully to Jenny; “But you’ll find out all you want to know when you get to Nature World. You’ll be able to ask all your questions then I promise,” Grandpa added quickly, for Jenny was already opening her mouth to ask the next question. Just as they were about to leave, Jenny saw the small, gray models of the manatees, being painted by a lady in the corner opposite the poster. Jenny raced over to get a better look. She knew the moment she picked one up, she wanted one of her own. “they only cost five dollars, and they are unbreakable and will last forever,” Jenny informed her grandparents, when she caught up with them in the car. The four inch plastic model fit neatly into Jenny's short’s pocket, once she finished examining it from every angle. “I wonder if they are related to the seal or the walrus,” Jenny said out loud. “Who? “Grandpa Bell asked as he concentrated on his driving; they were almost at Homosassa Springs and Nature World. “The manatees, “Jenny answered. “No, they say their only living relative is the elephant, “it was Grandma Bell who supplied the answer. Jenny fingered her model inside her pocket and thought to herself this time, they had the same color skin but I don’t think they look at all like an elephant. There had to be another explanation. She would figure it out when she saw the manatees for real. However, already in her imagination of her mind, Jenny dreamt up beautiful mermaids trapped in elephant hides by a spell put on them by a wicked, jealous, fat wizard. “Here we are, we’ll take the Jungle boat I thought,” Grandpa Bell announced as he parked the car. All three got onto the flat bottom boat while Captain Kelly rang the bell and shouted; “All aboard, who's coming aboard, next boat in half an hour.” Captain Kelly wore a sea captain’s hat and a black scarf over his right eye like a pirate. Jenny could not decide if she liked him or not. As it turned out, Captain Kelly liked Jenny. He chose Jenny to help him feed the turkeys, goats and monkeys in the jungle. He even let her hand feed the spider monkeys peanuts and slices of banana; “On account of my missing eye. I can’t see too good as I used to, so I need your help pretty Miss, if you would be so kind,: Captain Kelly had told Jenny. Of course Jenny loved helping and asked captain Kelly a lot of questions as they steered up the river deeper into the jungle. “Are there any manatees in this river?” was one of Jenny’s questions. “No not in this stretch of the river but beyond the park there are, and of course in the park itself they have 20 or more healing,” Captain Kelly explained to Jenny. Jenny could hardly wait to get to the park, only her grandparents wanted to eat at the park restaurant first before they began their tour. Being impatient, Jenny ate her hamburger and fries in less than five minutes and sat waiting for her grandparents to finish theirs. “O.K gang, what shall we see first,” Grandpa Bell asked Jenny and Grandma Bell. “The manatees,” Jenny half shouted. “Well we could, but I tell you what, let's walk through the park and see the other animals first and end up at the manatees pond last. That way we can spend more time there. Captain Kelly said they would be feeding the alligators at one o’clock. I think we should see that. They don’t half make a fuss,” Grandpa Bell explained to Jenny. She was disappointed, but Jenny was not a selfish child, and her grandpa did make sense, so would wait just a little longer to see the manatees.

Dog lover Jenny flies to Florida to her grandparents when her Mother has a new baby. Devastated, her promised puppy was not possible because of the new baby. Told through the eyes of nine years old Jennifer, her highs and lows, you feel Jennifer's sorrow and you cheer for her success. Never underestimate the passion of one small girl on a mission to save her secret mermaid. Not everything is as it seems, keep turning the pages to find out what happens next.

Marie a retired Teacher and Nurse now Artist and Author writing both fiction and nonfiction for children and adults. Her sense of humour and knowledge is evident in her books. Well researched and explained for the reader to understand. The messages are timeless and educational while telling a story you will remember. Help save the Manatee.

Myrthe Artist and Nature Lover creating happy art to spread kindness and awareness of the state of our planet. Her creativity and imagination can bring written stories to life. Let’s make the world a better place and care for the future of all Secret Mermaids.