The Man with One Shoe

Survival and Recovery: Living Beyond a Serious Mental Diagnosis 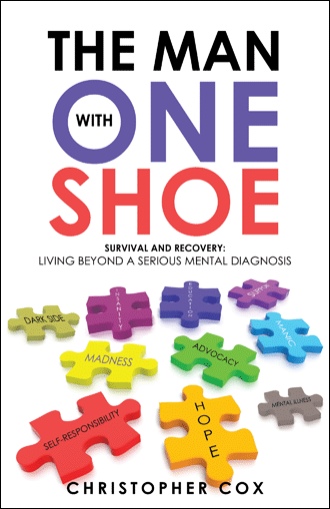 Upon entering the facility, I noticed a weather board. It was obviously old and weathered itself. On it was a date that was correct, the days of the week and little symbols that represented the type of weather outside for the day. Little rain drops as a symbol of rain, a sun for sunny, etc. It struck me as odd and outdated until I looked around the facility which was dark and miserable. There were no open windows of light, only fluorescent bulbs flickering. I saw this board as an indicator that this was a place to simply pass the time. This was a warehouse for the soul. I would find no answers here, just medication and idle time. Being maintained was the goal. I had been here before, maybe not this ward but the same type of place. I grew to find these controlled environments as a vacation from the chaotic life I led on the outside, the real world where I was not appreciated or even tolerated. I had become a man with no true realistic thought process. Only visions of how life was supposed to be in my world - the world of Shamans and Visionaries. I felt there was a place for me and those like me. A serene existence for those of us that could find it but for now, I must undergo the life sucking concoctions of poisons they call medication; thorazenes, haldols, respidols and lithiums. These were the truths of my current state of being. At this point I was simply a statistic, a fraction of a whole, no one to be relied on or called upon for advice. Although I was a graduate of a respected institute of higher education, I had become only a part of a man. An insignificant individual that needed a weather board to tell me what the weather was. I could not be trusted with a window for God forbid I should jump out of it and end the misery I found myself in - time after time, hospital after hospital, psych ward after psych ward. I had a curious mind. I would question life and its rules and regulations of today. Question who should judge and who had it right concerning reality. Was I so wrong as to have to be confined for only wanting answers to my personal quest for a holistic meaning in an unreal world? Sure, I had to be safe, not be a threat to myself or others but who were the ones saying I crossed this invisible line? The same ones that could not control their own lives! I did not blame the people - just the system. The system that says that “maintaining” is enough; to hell with what it means to be human. Why the hurry to lethargic medication? Let’s numb the shit out of them and watch them pass the years in a fog. I applaud the doctor that agreed after my decade in this cloud to take me completely off the medication and let things take place naturally. Why I needed his permission is another consideration! I would cycle for several years but at least I felt sorrow, happiness, grief, hate, love. This was living! The consequences for my actions were steep but I was alive and made my own choices, let me live with them. I was but one in the system, some found comfort but I simply took a break from the universe and took a breath for a short period of time. I would then reengage the madness until the depression took me down again. I was beating my head over and over, deep down I knew there was an answer to this madness. Eventually I found it, the wise mind where emotion and logic overlap. The interlocking reasoning of the two worlds I had to walk in. The world of rules and coherent thought that is required in today’s reality and the balancing of the other world, the one I found myself living in for over 30 years, and one where healers and sages thrive in mystery and pure energy. The world that transcends time and space, and the one that I believe is much more rational and logical than the first. It was this transformation of thought I was searching for all these years. I had found the key that allowed for that balance in life I yearned for. I began to live.

From the first step inside a psychiatric hospital at the age of twenty-eight to his current stage in recovery, Chris takes the reader on a journey that too many have endured but few have written about to this degree of insight—from mania to the depths of depression and ending up in recovery to the point of reengaging his community as a peer counselor in mental health systems.

Chris writes from experiencing over 30 years inside mental health systems as diagnosed with a serious mental illness and gives an in depth account of his treatment (or lack of). His recovery from disability (SSDI) to full time employment as a Peer Counselor working in the systems he survived.