A Long Journey to a Reluctant Enlightenment 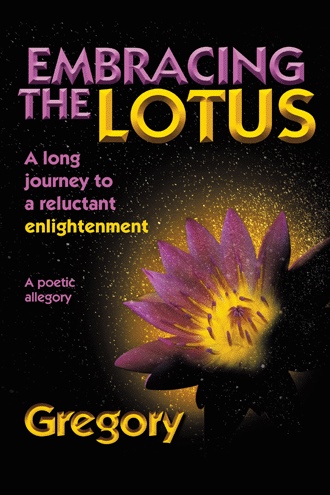 PETAL ONE Young, so young had I been, all those so many years ago, in that season of my life, when— all yet lay before me, like an exciting mystery novel awaiting to unfold and enthrall my ego as I lived the writing of it; when— my youthful delusions of omnipotence enwrapped me in their thick cloak of invincibility; when— my delusions of pope-like infallibility allowed me to believe I could make no mistakes; when— no obstacles were too tall or too broad to hinder or thwart my cherished dreams of success, status and wealth, nor all my "best laid plans" for the achieving of them; that early one soft, high summer eve, during the the twenty seventh year of my carefully planned and predictably unfolding life, during that pivotal year for all of us, when we believe we are rounding the bases after hitting a walk-off home run, but in truth are fleeing the Cerberus of our true selves while treading a crumbling ledge on the precipice of ego-delusion that towers over the black and grasping Abyss of Fate, that is our true adult life; that pivotal year, when, as too-often happens to those of us, who with even the most careful of soft-treading feet on that crumbling precipice, weighed down as we are by our back-straining packs filled with— the massive tomes of all our personal, familial, and cultural demands and limitations; filled with— the lead ingots of all our tendencies to thoughtless and youthful excesses; filled with— the fool's gold of all our youthful delusions of omnipotence and immortality, all of which can but pull us off balance, can but cause our feet to slip and slide on that trickster-cliff of ego-folly, while the Cerberus of our true self drives us on along that ledge, and the Abyss of Fate is constantly reaching up with its black, brawny arms and scrabbling at our slip-sliding feet with its long, sharp claws; that crucial year when just as I was so youthfully and delusionally certain that the Saturn V rocket of my perfectly planned and carefully constructed life was ready to blast off towards the moon of all my cherished dreams of material success and social status, I was overwhelmed with a strange and potent inner need to go for an out-of-character walk along a quiet rural road outside of the small mining town where over the last six years I had been diligently working at building the foundation of what I hoped would be the towering edifice of my cherished and hard-studied-for career, and while walking along that road . . . . . . I heard, just off to my left, and above me, the familiar and mournful cooowhaah, coooo, cooo, cooooo . . . cooowhaah, coooo, cooo, cooooo . . . of mourning doves, and looking towards that sorrowful sound, I saw a pair of them perched close together on a sagging telephone wire, and after gazing at them for several minutes while listening to their soft, sad cooing, I noticed, almost directly beneath the long sag in that wire, a mostly-overgrown road branching off from the main, while beside it was a small and weathered sign on a leaning, weathered post enwrapped in flowering vines, stating that it was the older version of the road I'd been walking down. And no great powers of deduction did it take to figure out that it had been abandoned on the building of the new road that I was walking along . . . And no less than had some strange and potent inner urging sent me out walking along that main road, a now stronger inner urging induced me to turn my strolling steps down that old road that had been abandoned on the building of the new, with my initial steps taking me underneath that sagging wire, sending those two doves flying off, their wings making that familiar whistling noise, which sounded loud and startling in the red-glowing, evening stillness. And instantly glad I was that those two doves had drawn my attention to that old road, and that I'd given-in to that inner urging, for with my first step along its over-grown way, and with the cessation of the wing-whistling of those two doves, a most strange, profound, and timeless S I L E N C E, the likes of which I’d had no memory of ever experiencing before, swaddled me like a newborn in a blanket of cotton batting, and so startlingly “loud” was that strange, profound, and timeless S I L E N C E, that I could but stop, and in utter amazement, listen to it, though as I listened, I heard a soft, soothing, and indefinable buzzing filling, not only my head, but my whole psyche, followed by the sense of . . . of . . . of . . . what Alice must have felt on following the White Rabbit down his hole, for when that strange buzzing stopped, there again was that strange, profound, and timeless S I L E N C E, though it lasted but a swaddling short span of seconds before a delightful panoply of natural sounds supplanted it, and as my footsteps, quite of their own entranced volition, carried me forward, I notice, with utter amazement, the wonderfully delicious absence of all the mechanical noises I'd theretofore unconsciously accepted as an integral aspect of my daily reality, and as well, just as keenly noticed a profound and uncanny alteration to my perception of time— no longer were the seconds of my existence hitched together, nose-to-tail, like railway coaches full of the passengers of the experiences of each of those seconds, but had become like shadows that landed, one-atop-the-other, never accumulating in a pile, never connecting the experiences of the former to the latter, never weighing down the latter with the memory-baggage of the former, but always being a single, weightless, and utterly timeless N O W, . . .

This is a first-person poetic narrative by a successful middle-aged man, concerning a long spiritual journey. It began when he was twenty-seven, just getting traction with his engineering career, and was “awakened” from his ego-unconsciousness by mystical experiences that inspired him to scribble out reams of poetry—and meet his Muse. Subsequent career demands induced him to deny the mystical experiences, quit writing poetry, and “fall back asleep.” For two decades he was comfortable in that “sleep,” but during the third, the emptiness of his successful, ego-life and bouts of depression induced him to “wake up” enough for him to realize there was something fundamentally wrong with it. After many hours of depression and deep thinking about his life, he realized that he had to regain the sense of meaningful wholeness he had felt when in those mystical states and writing poetry. This allegorical poem is his attempt to describe that struggle to “wake up” out of his long ego-sleep, regain his mystical wholeness, and through the act of writing this poem, make peace with his betrayed Muse and explicate what he learned during the process.

The author, firstly, is a shaman, and only secondarily, a poet. Embracing the Lotus is the culmination of a four decades shamanic journey deep into the Mystery, a journey that Joseph Campbell elucidated in his masterwork, The Hero With A Thousand Faces. The act of writing it represents the stage of the journey Campbell labeled, “the Return.” Like all shamans, the author lives in two worlds: the mundane world of our material, ego-reality, and the world of the Mystery. The details of his journey in the ego-world are too mundane to record, while its counterparts in the Mystery are too extraordinary for belief. What he learned on his journey—the ideas, insights, revelations, and understandings—are contained in this poetic work and represent what Campbell labeled “the Boon,” the raison d’être for the whole, life-consuming process. Importantly, the author—in the words of Carlos Castaneda’s shaman/teacher, Don Juan—has “lost his shields,” has lost his normal human defenses against psychic and telepathic “noise,” and like many shamans, chooses to remain anonymous.