Who Says There Is No Treatment for Pancreatic Cancer?

Navigating the Maze . . . Japan and Back 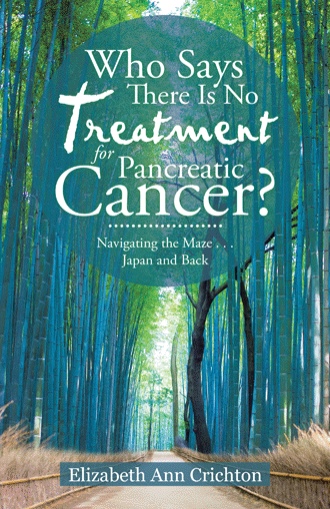 I was finally transferred to the ward and on arrival the nurse attending to me said that Mary, the other nurse looking after me that evening would be on later. I didn’t think anything of it until Mary arrived and I was delighted to find she was infact someone I knew very well from the Youth Group at St. Albans Epping! I am godmother to one of their children! I couldn’t believe it! Confusion, an expensive confusion, about my medical benefits revealed that I didn’t have any hospital cover, and so I needed to be transferred to Westmead Hospital. Although old and dinghy I found it to be excellent. My initial admission put me in a ward with three men and then the nurses said a female patient was being admitted when one of the men left. Well she was! The patient turned out to be a very mentally unstable lady with major alcohol problems who had her bottles of alcohol delivered by a ‘friend’ and stashed behind the locker. The room reeked of alcohol and at one point one of the nurses confiscated the ‘grog’. When she discovered the missing bottles there were many abusive and colourful expletives, which I was fearful would end up in violence. She would talk about showering all day and finally head for the bathroom after 11pm, bang and crash for an hour and then leave the TV blaring all night. Another patient and I took it in turns to get up and turn it off once she was asleep, however when she woke she would put it back on and we would repeat the same process. She was also given a toy dog and she would spend the night talking to it, hour upon hour, driving all the other occupants mad! I went home from this ward to stay with my sister at their beach house at Hardy’s Bay, a wonderful place to recuperate, with its views over the bay, and lovely big verandah. However I didn’t really have the strength or inclination to enjoy it fully and spent a lot of time just sitting inside and staring into space. At that point I had a large wound going the entire width of my abdomen, wounds at the navel where they had done a laparoscopy, and an uncomfortable fat drainage tube on my left hand side. The operation had taken a lot more out of me than I had anticipated. This being my first operation ever, I guess I didn’t know what to expect and the surgeon kept telling me, “this is major surgery not like a hysterectomy or something”. How right he was! About two weeks after being discharged we noticed a strange odor coming from the drainage tube so my sister drove me to the local hospital on the central coast, they contacted my surgeon and I was transported immediately back to Westmead by ambulance with a pseudomonas infection and unbeknown to me at the time, EBSL and a lung infection, all antibiotic resistant. I did wonder why the registrar said on a couple of occasions “I hope we can get you through this”. On arrival at Westmead, I spent the night in the ambulance bay at the hospital on a very uncomfortable and cold bed with a window leading into the area next door where someone who had been found after being attacked on the street (it was in the paper the next day) subsequently died and the distressed relatives were coming backwards and forwards as well as numerous police and the coroners. Finally I was moved into the emergency ward where I was taken for scans and other tests. My sister was visiting the next morning when a woman dressed like a fairy or other weird outfit, flashed by. Shortly afterwards my sister went to get us both a cup of tea and there she met up with this lady armed with a huge bag and emptying the fridge of all its contents including sandwiches, fruit and drinks for the patients. My sister mentioned this to one of the nurses who said they just leave her be as she can be violent on her bad days. This admission took me into a private room because I had to be isolated so there were advantages! And also adventures! My next-door neighbor for almost the entire six weeks of this admission was a criminal who was being guarded by two burly security guys at any one time, manacled and hand cuffed. Of course I was bursting to know the details but that was not to be. The guards at night sometimes got a bit verbose and loud and on a number of occasions I had to haul myself out of bed to speak some words of wisdom to restore the peace. There was another major adventure although a very costly one. At the other end of my ward one of the patients became disorientated and violent, went on a rampage destroying the nurses station and the equipment including TV’s, photocopying machines and other office things, three cars parked outside the ward and headed for the Children’s Hospital. This cost the hospital over $200,000!

A diagnosis of pancreatic cancer is generally seen to be a death sentence, and sadly for many, this is in fact so. The fear it engenders in the person and the confusion one feels is indescribable. It is also generally a fact that it is not an issue we have had to deal with, and so the options are confusing and limited in our minds, generally only confined to the medical model available and advised by beautiful and well-meaning doctors. It was soon after she moved north of Sydney to start a new life in an ecovillage that Elizabeth was shocked to find she had a diagnosis of pancreatic cancer stage 2B and, after a major operation, chemotherapy, and an almost immediate recurrence of the tumor, was advised that no further treatment was available apart from palliative radiotherapy. At this point, she consulted Grace Gawler, who has invaluable knowledge of worldwide treatment options for the various cancer types, and so began a journey of recovery that took her to Japan for three months for immunotherapy treatment and proton beam therapy. In the book, she shares a very detailed personal account of her Japan experience in the form of emails sent home as she traveled the healing journey.

Elizabeth Crichton BAppSc(OT),ARMIT,CM (WPATA),EMDR 1 & 2, EFT Elizabeth lives a colourful and exciting life with varied working careers as an astronomical observer with the CSIRO working on a NASA project, a Diagnostic Radiographer, Occupational therapist, Meditation teacher, Transactional Analyst and Psychotherapist and in the latter part of her career ran a successful Private Practice. In conjunction with this she also held a comprehensive therapeutic group programme in a community centre, a training group for aspiring Transactional Analysts and taught Transactional Analysis in various colleges. She currently teaches and practices heartfulness meditation, is interested in nature and simplicity and is helping to create a sustainable community in an Ecovillage just north of Sydney.