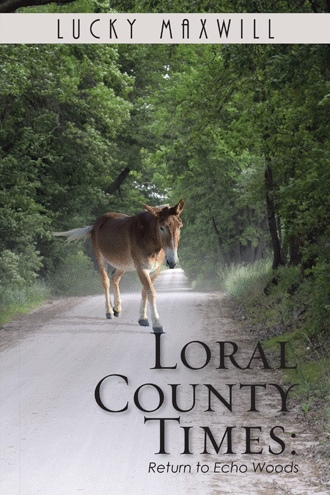 LORAL COUNTY TIMES: Return to Echo Woods Chapter 1 It was a muggy spring morning and sharp patterns of lightning zigzagged across the cloudy country sky. Squirrels chattered and crows squawked, alerting creatures within a countrymile that a storm was brewing, would hit at 12:33 p.m. and last for 37 minutes. A light breeze swept through the long open windows of Audry Merryweather’s kitchen and brushed gauzy curtains softly against the freshly scrubbed wooden window frames. She had awakened early that morning and made a shopping list for her trip to Springfield the next day. She needed to buy new hardware for the old cupboards, paint, new lamp shades, and a cabinet for her music system. Audry was looking forward to redecorating the old family homestead where she now lived. She had moved in only a couple of months ago, right after her 21st birthday. The place held the best of Audry’s childhood memories, and she was devoted to returning it to its original charm and presence in Echo Woods. As she sat eating her breakfast of biscuits, jam, and creamed sassafras tea, a sudden gust of wind blew open the heavy, creaking kitchen door that led outside. Then, the screen door loudly slammed behind it. Unannounced, and quick as a flash, a small person, barely taller than the kitchen counter, slipped into the room. Audry gasped, too frightened to speak or move. “Hi-ho, don’t mind me. I’ll just put my things over here, and we can visit,” the self-assured intruder said in a lilting voice as he slipped past the kitchen table. After the shock wore off, Audry jumped up and yelled, “Excuse me! Who are you?!” Without hesitating, the uninvited visitor calmly replied, “Well, it doesn’t really matter now. We’ll get acquainted soon enough. But, since you asked, my name is Sutherland Angus MacGregor. I was named after my great-great grandfather Sutherland Angus MacGregor, the first. To some I am Mac, but most of my friends call me Sam. That’s short for my full given name. Yes, I know—it’s a lot to think about. But, my dear mother thought it would be best for my promoters to give me a proper business name once I became better known for my talents. For now, though, you can call me by my mother’s favorite name for me—Sam. She said I reminded her of a charismatic mayor she knew once upon a time by the same name. He also was—” Immediately, Audry interrupted his rambling introduction. “Talents?” she asked. “Sutherland Angus Macgregor ... Sam??!” With each question, her voice grew louder, until she stamped her foot and asked, “What are you talking about?!!” BAM!!! A brilliant flash of lightning lit up the kitchen, followed by a crack of thunder that split the sound barrier and silenced the entire county for three seconds. The house shook, the kitchen windows rattled, and Audry’s heart raced! Outside the trees were shaking so badly, she thought for a second they might want to run away. Audry grabbed the edge of the kitchen counter to steady herself and stared at the strange being in front of her. She had never seen anybody like him before. Looking into Audry’s green eyes, Sam proudly proceeded, “Why yes, let me explain. I am a magician and piper of sorts, and I do many kinds of odd and sometimes strange jobs. A friend of mine at the sheriff’s office thought maybe I could help you out, since you haven’t lived here very long. I have had many successes in my time in this line of work and have even tamed shrews, werewolves, wild hares and mules, as well as some elements of Mother Nature.

LORAL COUNTY TIMES: Return to Echo Woods is the introductory tale of people, animals, and adventures in fictional Loral County in Missouri. This rural area is a place where normal activities are not exactly as they appear because of a clever elf named Sam, who has hidden agendas and is only visible to a select population. He is especially perplexing to newcomer Audry Merryweather, a young woman who moves to Echo Woods to take ownership of her family’s historical homestead. Here she unwittingly becomes an accomplice in Sam’s efforts to shelter and provide forever homes for animals. But, she is not alone. Sam is quite resourceful and has many allies with diverse talents—everybody from an animal control officer to a youth home coordinator and even a red-tailed hawk. Altogether, they combat bullies, overcome challenges, and provide a community where all can call home. Woven within this tale are historical and geographical Missouri references that are hyperlinked to web resources. These offer superior supplemental reading materials for students and educators alike. Subtle humanitarian messages regarding animal welfare and culture, as well as Missouri history, make this a value-added book for young readers.

Born and raised in Missouri, the author spent most of her adult life in Nevada and California. She earned a B.A. degree in Communications at the University of Nevada—Las Vegas (UNLV). Contact her via email at: LuckyMaxwill@gmail.com