God Versus the Idea of God 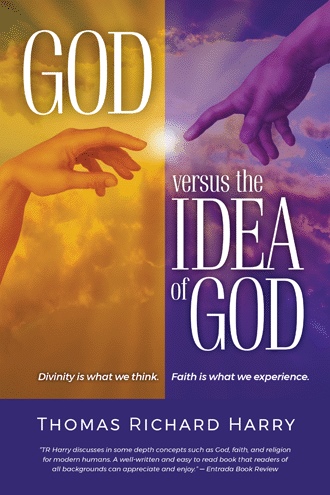 Chapter One A Steep Hill to Climb Thesis: Yes, there is a God. Antithesis: No, there is no God. Synthesis: After a very prolonged period, nothing yet. Where do your thoughts fall on this scale of belief? Is there, isn’t there or what else might there be? Perhaps what follows will shed some light on this long-debated issue. Maybe not. In any event, for many the search for belief can be a steep hill to climb. When I use the term “God” I mean what the Church teaches, a divinity considered the Supreme Being, the creator and ruler of the universe; something numinous and transcendental. Something well beyond man’s untrained ability to imagine. I do not mean a deified person or object. Such Supreme Being has historically assumed various forms, expressions, or characteristics for various peoples in various cultures. It has been pointed out that every culture develops its own idea of God. Why does man believe in, or need to be taught to believe in, God? There are good and demonstrable reasons why, and we will delve into them. They explain just why we believe, or at least try and believe, in such a Supreme Being. It’s really a matter of self-interest. So, while rationally we do not know the does or does not of God itself, there is demonstrably a rational (does exist) idea of God (Chapter Five). There is also a rational purpose (does exist) for the god of that idea (Chapter Six), and a questionably rational institution, the Church, (Chapters Three and Four) which defends and promotes their version of the god of the idea. We will explore this idea of God in depth here as I have come to hold that it is this idea itself as opposed to its subject that defines what it is we hold as belief. I have also come to the conclusion that God, as Christian mankind holds it in its subjective and collective mind as the result of the idea (belief), is both a reality and more importantly a human necessity. As someone has famously said, if God didn’t exist, we would have to invent it. That’s a provocatively interesting statement, and one we will pick up again. I believe strongly in the concept of God. However, whether or not there is a god, independent of the idea, rationally we have yet to figure out how to either demonstrate this, or to finally refute it. In this sense we are all non-corroborated agnostics, no matter what we might believe, or the degree of confidence (faith) we have in that belief. We start here from that position; we don’t know. What we do know, religiously speaking, we learn from the Church. The Church in turn relies on the Bible, the received word of God, for its teaching. For centuries, this chain of knowledge was both stable and authoritative. Then, the apparent results of what we today call science began to cast doubt on biblical “truths.” This was and is a challenge for the Church. In the case of scientific conclusions vs. religious beliefs (reason vs. faith), don’t let anyone fool you: Western religion and science have since classical Hellenistic times been at odds on significant worldly matters. This is not a new issue. While that may not come as news to most, both cannot be right in their opposing conclusions. Under the law of contradiction two opposing propositions cannot both be true. One of them has it wrong. Which is the best horse to bet on here, the seen or the unseen? That might depend upon the context of their positions. Western religions—Christianity for purposes here—have for centuries been playing defense as the physical, and lately even the social sciences have progressively demonstrated pragmatic concepts of knowledge and understandings of worldly matters. These not infrequently differ sharply from the revealed religious presentation of those same events as described in the Judeo-Christian Bible. Our world and the heavens most probably weren’t made in six days of spiritually creative activity. Earth most likely isn’t about 4,004 years old—more like 4.5 to 4.6 billion years, give or take a hundred million years, according to science—and man as we know him today most probably didn’t appear on earth fully human in one day, no assembly required. From a historical scholarly viewpoint, it seems highly improbable that the first century Jewish charismatic eschatological preacher, Jesus of Nazareth, was a god, or “God,” in the divine Christian sense of the word. He was so anointed well after the fact by a minority of Church elders who looked to him as their religious inspiration and raison d ètre. Admittedly this was done, as we might say, in an evolving and generally good faith way. We’ll go into these matters more in the pages to come, citing specifics where the Church has attempted to reconcile these differences within its own teachings. Religion (the Church) is built and sustained upon faithful belief in the unseen by the revealed divine word of its God, the Bible. It has no other authentic evidence or source to quote. To have the biblical word of God questioned is to challenge the basis of religion itself. God, as presented by the Church, is a powerful conceptual as well as practical influence on man. But the historical presentation of God by the Church has problems associated with it, exacerbated by the accumulated findings of science. On the other hand, as Lord Jonathan Sacks (Former chief rabbi of the United Hebrew Congregations of the British Commonwealth) pointed out, “No society has survived for long without either a religion or a substitute for religion.” Many, many on this third rock from the sun take monotheistic religion as a given. Should we? Belief in a religion is a conviction based on a matter of faith, which represents trust. How far can/should this be taken in matters of a worldly nature?

Mankind, society, and cultures have progressed over the past two millenniums but the “Church” seems to have not kept up. Is it the Church’s obligation to adapt? Yes, to some degree, it is if it wants to continue to be considered relevant...a significant issue today is reason vs. revelation. But because the Church claims it alone possesses the truth, and truth is immutable (but is, however, subject to context), it seems reluctant to demonstrate willingness to adapt tradition to a changed world. Today we have a great deal of accumulated knowledge and scholarship that at least suggests some of the Church’s teachings are not immune to question—which produces skepticism, which in turn erodes faith. This book is intended to respectfully address these questions from a layman’s perspective, for the potential benefit of other lay-persons of all ages and conviction (or lack thereof).

With more than 35 years of lay religious experience and exposure at the local church level, the author has become increasingly concerned—as others no doubt have—about the Christian church’s present health and future role within society. History suggests that societies benefits from a supporting and healthy religious community. Convinced that its “professionals” need to hear from the concerned thousands sitting in the pews, he writes as one of them and suggests a collective voice. Thomas Richard Harry, “TR”, and his wife live in Windsor, California. Writing, while not his vocation, is his avocation.