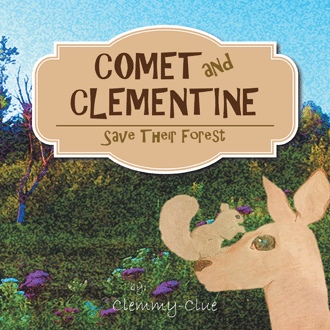 It was a day like every other summer day, or at least it appeared that way. Comet and Clementine took their usual route in the woods making their way across the forest to the valley they loved to visit. Clementine called it Lavender Valley, because it had a purple hue that engulfed the shadows that bordered the mountain. She liked the smell of the lavender that grew in the rocky crevices on the fringes of the white mountain that hugged the valley. On the edge of the valley, there was a lake of emerald-green water that came from a waterfall from deep within the mountain. It was surrounded by birch and pine trees that made the air smell like tea. The chamomile on the outer banks of the lake added an aroma that made both Comet and Clementine make believe they were at a grand tea party.

Clementine, a clever young deer, and her best friend Comet, a grey squirrel, discover a gemstone in an overgrown grove near their favorite meadow. The gemstone, or “cluster of shiny,” can save their forest from the drought. Discover the ingenious ways Comet and Clementine use the inner workings of nature and their forest friends to help them restore the water.

Clemmy-Clue writes stories that transcend the harmony and intelligence of Nature. Her children’s stories teach ecology in an entertaining way, providing real facts and the intricate workings of the environment. The author is a veterinarian and has a Ph.D in Clinical Ecology/environmental medicine. She taught and developed Certified Medical Curricula and was Director of a wildlife research center in Canada for nearly a decade, and now holds several Medical Board and Foundation positions. She is currently working on bringing her knowledge of the environment and its flora and fauna to readers of all ages through fiction and animated series that are not only designed to teach environmental facts, but moreso to transcend a respect and love of nature and animals. Comet and Clementine is the first component in an ecological series for children currently in development.