Harnessing Your Past to Create Your Future 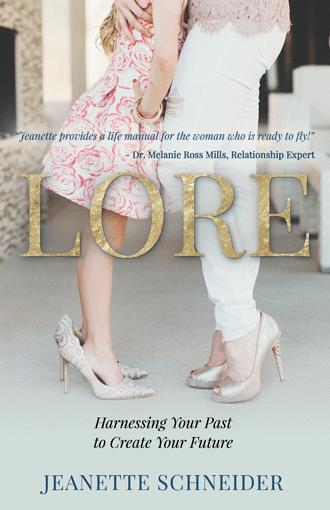 INTRODUCTION: Lore (noun): a body of traditions and knowledge on a subject or held by a particular group, typically passed person to person by word of mouth. Synonyms: mythology, myths, legends, stories, traditions, folklore, fables, oral tradition, mythos. Reflection of self is one of the greatest catalysts for a new way forward. Through it we discover the essence of how we approach life, how successfully we move from aspiration to actualization and we uncover our LORE. These are the beliefs we have been immersed in from infancy by those who live life alongside us. This book offers you the opportunity to shape the story and write the chapters yourself, but only once you are consciously aware of where the story begins. I have had the honor of final conversations with those heading on to a new adventure. It seems that in the moments between Here and There we are no longer housed in the stories of our lives. The way we’ve raised our children, our legacy, our prejudices and beliefs all become inconsequential. It is as if we are able to review our lives in real time and God, what magic, if you can be present as someone moves from maligned to wise. My grandmother, a German immigrant, raised ten children in a three bedroom home in Florida, all while rocking magenta nail polish and bite. At the end of her life we had three incredibly meaningful conversations that will remain with me for the balance of mine. All of the family stories about lack, hardship and our token self deprecating humor fell away. Our religious bias and deeply entrenched views of ourselves and others were suddenly tagged as nonsense. She asked me to see the world differently, to roll with the big things as they would work themselves out and to pay attention to the little things, “Love each other every day.” Then she asked me if she could leave us. Many years before I had a similar conversation with her husband, my grandfather, prior to his decline into Alzheimer’s. He raised a brood of children as a devout Jehovah’s Witness where authority was absolute and the Elders reigned supreme, yet as we talked about my clashes with faith and my leaders, he shook his head, “They are just men, little one. Find your own way.” I was stunned that this stoic man who breathed the faith of our family didn’t shake his finger at me for my trespasses. Instead he saw it for what it was as his light began to diminish. Each of these people, strong in their own right, challenged the messages they’d not only received throughout their lives, but the messaging they instilled in their children and grandchildren. It was as if all the things I knew of them were no longer real, as if they’d never been. Even with this grand imparted wisdom I didn’t change my life to reflect their wishes for me. No, I got caught up in the living, the bills, the relationships and it wasn’t until I was responsible for the messaging of another that all of this came rushing back wrapped in a question delivered by my very inquisitive five year old, “Mom, is it true?” Rather than believing what she was told, rote, she instead began coming home from school asking if certain things she was being told were actually true. No. They’re not. Most of the things you believe about yourself and your world view has been handed to you via generational, social and cultural messaging. These beliefs are a timeless hum that make up your person and here is the catch. They will color the world of your children unless you pull that messaging out of you, hold it in your hands and begin to weigh truth from story. It is hard work. You are excavating the old, tragic experiences, the things that go bump in the night, but in the end the relief is so great and you are left with conscious, purposeful messaging to build up the people you love. You are taking off the shine, baring your soul and all for the purpose of creating healthier paradigms for yourself and your children. This book pokes at story, digs holes in belief systems, offers reflection points, and ultimately asks you to love yourself, scars and all, so that you create a new conversation for yourself and those you influence. I have been blessed with an army of women who have been on this search with me for the purpose of mentoring others, sharing their stories, creating dialogue and most importantly, a platform where women feel comfortable sharing their personal trials and triumphs. They have offered their own stories, their own musings and have done the work to show you the way. Throughout these pages you will find writing and visualization exercises as well as questions to stir up some of the good stuff. This book has been organized as if you were in a workshop and you will find the exercises build upon one another, so have a journal handy. One of my favorite exercises is the love letters to your past and future self. A lot of gems came out of this collection of letters and they have informed much of the content. I have carefully curated those which I think are most salient and have built exercises around themes that bubbled up as the women shared their own catharsis. While the letters themselves have beautiful points, as you will see, it is in the interviews and surveys I conducted with the writers that the poetry appears. My greatest hope is that every woman who reads this book finds something meant to be, be it a quote, a blessing, a story. Let’s get to work.

As a woman, you’ve been programmed to act, think, and behave in certain ways—and not always to your benefit.
Lore—as in “folklore”—challenges women to closely examine the stories that have shaped their lives.
Jeanette Schneider, a single mother and the founder of Lore Advocacy, a network of professional women whose goal is to inspire women to change the world, shares love letters women wrote to their younger selves. The lessons in the letters along with the author’s own insights will help you:

• change the trajectory of your storyline;

• challenge what you’ve been led to believe about yourself;

• monitor your thoughts and understand where they come from; and

• enjoy the benefits that accompany forgiveness.

The book includes exercises to assist you through free-writing, visualizations, and reflection points, and as you complete the activities, you may get stuck on specific memories or events. Allow for that, but keep working to find your truth with this guide to smashing self-imposed limitations.

Jeanette Schneider is a single mother and the founder of Lore Advocacy, a network of professional women whose goal is to inspire women to change the world through a gender lens of equality, self-actualization, and the shattering of glass ceilings. Schneider is also a senior vice president in the financial services industry and serves on several boards. In 2015, she was inducted into the Hall of Fame of the Women’s Chamber of Commerce in Nevada and was selected as a Nevada “Woman to Watch.”