The Promise of the Fifth Sun 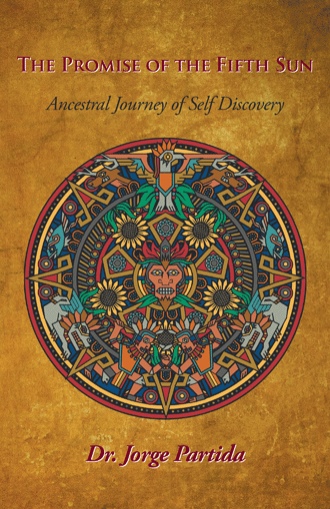 The Promise of the Fifth Sun The kingdom of Tonatiuh is the promised kingdom of Nican Tlaca, members of the original family, who trace their roots back to the beginning of all life. We are all their descendents, the children of the Fifth Sun, intricately connected by history and culture. More than 25,000 years ago, our ancestors came from Africa to Asia and across the Bering Strait into the Americas by way of the north. Many years after, our great grandparents left the mythical lands of Aztlan to follow a dream of prosperity and abundance. Across cultures and ages, our ancestors wandered and were guided by myths of a promised land. They finally came upon such a promised paradise, where, as it was written, heaven and earth came to meet. Upon that place, they built the grand city of Tenochtitlan, the present day Mexico City. Our Aztec ancestors built the grand city right on the spot where the eagle was found devouring the serpent. In the story, the eagle represents the heavens and the serpent represents earth with all of its darkness and confusion. Heaven and earth met on that very spot and the entire experience of human creation was transformed instantaneously upon witnessing the foretold myth become reality. The light of the heavens conquered the darkness and ignorance of our fears and we were transformed. We were transformed yet again when two separate worlds, the European and the Native collided, forever altering humanity. The serpent, representing our fears and doubts is devoured by the eagle, which represents the deep power of the heavens and the universe as well as our soul or our inner potential. The serpent is that part of the self which is weighed down by doubt, uncertainty and limitations, but the eagle is the promise of spirit, of unrealized potential, of the creative, healing, restorative force which is found at the center of our being. Mexico City not only represents the birth of the modern movement with technology and the changing world market economy, but it is also a place of great spiritual significance where the ancient gods and Christianity speak with equal clarity, promising the transformation and liberation of those most oppressed. In the Mexican experience, in the lives of all that are descendents of that nation, ancient and divergent worlds, cultures and mythologies mix and mingle to express the complexity of our human existence. In the old days, the Nican Tlaca predicted that in the final fifth world the secrets of life and liberation would be revealed. This world would be marked by great change, destruction and transition, ruled by Ollin, the god of change and turmoil. Ollin, usually pictured as an animal skull with large fangs, feeds on the proud accomplishments of our fragile human condition, particularly as we strive to hoard material possessions and power. It is written that the Fifth Sun will rule over this present time of great transformation. Although there will be great confusion and suffering, particularly for those who resist the natural and impersonal universal principles, there is also the simultaneous potential for the greatest evolution of human consciousness, self awareness and enlightenment. This is your life. It is the life of this fifth world, governed by the light of the Fifth Sun. This is your world and my world. It is the world that was foretold in great detail, etched in stone and carved across the face of the great Aztec Calendar. These carvings, which illustrate the promise of the Fifth Sun, guarantee true freedom in your lifetime. True freedom can be found inside your own mind. You simply have to remain true to yourself. Maintain guard of your mind and your thoughts and do not allow negative experiences of your past to invade your present life. The instructions included in this book are intended to bring your life into harmonious balance so that the external changing forces do not come to govern your inner peace and do not dictate the quality of your life. Once you know your true origin, you know the power you hold to impact this universe. There will be nothing you cannot accomplish!

The Promise of the Fifth Sun explores the myths and the healing secrets found within these ancient stories of creation and native cosmology. By understanding how our native ancestors viewed life, we are able to learn from their profound understanding of healing and its connection to the unseen forces of life and creation. We are the promise, and our time has arrived. The Promise of the Fifth Sun reconnects us to the sacred roots of life and creation. The ancient Toltec and Nahuatl people lived in order to express and celebrate the mystery of creation through time and space. Looking through their eyes, through their heart and soul, we come to recognize of a unified, nature-rooted existence containing all the medicine and power needed for our healing. There is more than culture and customs that remains in the collective consciousness of our native and Latino communities. A rich, ancestral promise stirs within each one of us. The promise restores our rightful place within the evolving history of creation.

Dr. Jorge Partida is a Clinical Psychologist, and Curandero in the Nahuatl-Toltec tradition. Born in Mexico, Dr. Jorge was trained in native healing traditions by his paternal grandmother, who was a Curandera. Dr. Jorge immigrated to Chicago at the age of nine where he grew up and learned to navigate two cultures and world views with divergent perspectives on health and healing. He struggled to legitimize the native healing teachings and subsequently, obtained his doctorate in clinical psychology. Dr. Jorge has served as Director of the Doctorate Program in Psychology at John F. Kennedy University and Deputy Director of Behavioral Health for San Francisco’s Department of Public Health. He is currently Clinical Director at Alo Recovery Centers in Los Angeles and has also developed programs in the areas of child welfare, education, community building, diversity and spirituality. He has worked in Liberia, Africa in the repatriation of boy soldiers and has collaborated in creating intentional communities in Colombia, Peru, and Mexico. Dr. Jorge has worked with native healers from various countries motivated to find t universal aspects of health and healing across spiritual and cultural traditions. Dr. Jorge has been most influenced by the Toltec and Nahuatl traditions of Mexico. In his writing, Dr. Jorge explores the secrets of healing encoded in native traditions, which trace their knowledge thousdands of years longer than historically reported. Dr. Jorge’s treatment approach integrates native medicine, ritual and traditional psychotherapy to provide a person centered, empowerment model of healing, restoration, and wellness.