Kiwi on the Camino

A Walk that Changed My Life 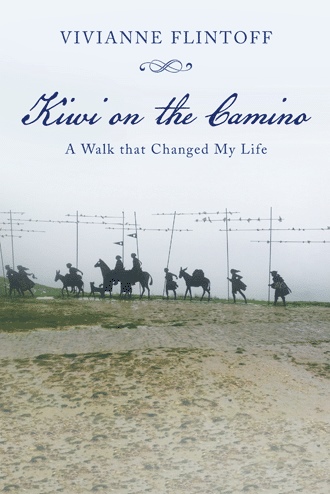 There is a turkey near the albergue and as we prepare for bed its ’gobble, gobble’ is audible through the open windows. I want a relatively early start as we are heading into the city of León in the morning and the guidebook has warned we will need to be alert as the waymarking into the city is sometimes hard to spot. I decide to set my alarm to ensure the required early start. I hope that if I put the phone under my pillow, the alarm will wake me, but not the other pilgrims. I notice the setting for a rooster alarm. I choose this setting. Was this choice inspired by the turkey outside our window? Mansilla de las Mulas to León 18.6 kms (11.6ml) 336.1 kms (208.9ml) to Santiago As a well-spent day brings happy sleep, so life well used brings happy death. Leonardo da Vinci (1452 – 1519) April 14, Day 24 I wake early in the morning and so does every other pilgrim in that large bunkroom. It is dark when my rooster alarm starts crowing. It sounds very loud in the quiet of the morning. I fumble under my pillow and haven’t a clue how to turn the wretched noise off. I get out of bed as quickly as I can (fortunately I am on a bottom bunk) and rush, with the rooster, in fewer clothes than I would have preferred, to the women’s bathroom. The light does not work. In my indecorous night attire, I go to the men’s bathroom. Their light works. Typical. I still cannot silence the rooster. By now pilgrims are getting up. What is the point staying in a sleeping bag when sleep has been so rudely interrupted by the rooster at large in the bunkroom? Men push past me to begin their morning ablutions. I am wretchedly embarrassed. The Adonis grabs my phone, takes out the battery and then hands me the three pieces. I retreat to the women’s bathroom to recover. When I re-enter the bunkroom, I hear a few muttered comments about roosters and necks needing to be rung. Dafydd’s comments, on the other hand, are not quiet. Anyone who cares to listen to his opinion on the preferred short lives of roosters can do so. I smile ruefully at him. Loose the cords of mistakes that bind us Thanks to the rooster we are on the road early heading to the city of León. In a group of five we cross the Río Esla, looking for the medieval bridge up ahead. As we walk and talk a group of Camino cyclists ride up beside us. As they pass, we hear a loud, “cock-a-doodle-doo.” The Italians are gone in a blur of lycra. León is the largest city we have walked to. Those Romans had stamped their sandals across the Meseta and the 7 th Legion created a camp which became the foundation of the future city. The original city wall, with four gates, is well restored and almost complete. We of course want to visit the cathedral, the Pulchra Leonina, reputed to be the most striking Gothic cathedral in all of Spain. The old city is stunning with cherubs watching over us and a fountain symbolising the two rivers that embrace the city: Río Bernesga and Río Torio. Trees, now in leaf, aid the city’s charm. Once again, I choose a religious albergue and this time it is the Benedictine monastery on the Plaza de Santa Maria del Camino y Grano in the old part of the city. As we walk in under the high arched entrance way which feels a little tunnel like, we are greeted by Paul, the Korean pilgrim who had helped me with my iPad. At the reception desk, we hand over both our New Zealand passports and our credentials. This evening our family names are checked to see if they are the same, for at this monastery, there are three bunkrooms. There is a bunkroom for single men, another for single women and a third for those who can prove they are legally married. If the reception folk are convinced, the couples are allocated to the bunkroom for those who are married. One couple is separated as they cannot prove to the satisfaction of the staff, that they are married. Another couple manages to lie their way into the bunkroom for married couples. Those present in this bunkroom, married or not, agree that we are all tired. I appreciate the gender separation with the bathroom arrangements. We are ready to go and have a look around León. It is now Holy Week, the week which leads up to Easter, the most holy and significant of festivals in the Christian calendar. Downstairs in the internal courtyard there is a large white marquee and underneath are three floats. We have never seen the like before. The floats are representations of the Stations of the Cross. There is a float of Jesus carrying His cross, another of Him on the cross and the final, a weeping Mary. The floats are decked with fresh flowers. The flowers are lavishly gorgeous. We have no idea what the floats are for and when they will be used. The fresh flowers suggest the floats must soon be going in a parade. Bruce and I follow the brass scallop shells embedded in the pavement not far from the front door of the monastery. There are a lot of people about. What is going on? While we are walking up a narrow medieval street, so narrow it surely must be one way, a police officer on a motorcycle stops in the middle of the road to greet and talk with a friend. A small car inches past the motorcycle and the two friends. A road sweeper heads up the street apparently wanting part of the action in this already constricted space. It is madness. But no, there is laughter all around and people calling to one another in unabashed pleasure.

What is it that is motivating thousands of people to leave behind the comfort and securities of home, put heavy boots on their feet and a pack on their backs, and head off to walk the route known as the Camino de Santiago, or the Way of St. James, following in the footsteps of the hundreds of thousands of people who have walked the Camino down through the centuries? In 2014, Vivianne Flintoff took an extended leave of absence from her place of employment to walk both the Camino de Santiago and the Camino Finisterre. With her husband, Bruce, she began the seven-week, nine-hundred-kilometer (five hundred miles) walk at St-Jean-Pied-de-Port in France, crossed the Pyrenees, and walked the French route to Santiago de Compostela. Two days later, Vivianne and Bruce put their boots and packs back on and headed off to walk the remaining one hundred kilometers (sixty-eight miles) to Finisterre on the Atlantic Coast, to the beach where legend has it that St. James preached and to where his disciples brought back his decapitated body. In Kiwi on the Camino: A Walk that Changed My Life, Vivianne courageously, honestly, and with humor tells of the pain, (she badly sprained her left ankle just three days before beginning the Camino), fears, anxieties, challenges, fun, and friendships encountered along the Way of St. James. Her life is radically changed at the completion of this epic walk. Vivianne’s meditations shine light upon her inner criticisms, and gradually, with each step, she lets go of self-judgment and becomes self-compassionate. Vivianne comes to a place of life transformation, where she is no longer prepared to live a highly stressed life. Her journey speaks to the many people struggling to juggle the complex demands that a contemporary life requires.

Vivianne Flintoff was educated at the University of Waikato. She has worked as a school guidance counsellor, manager of a social service agency, clinical leader and counsellor-educator. Vivianne has published professionally and in the New Zealand Walking Magazine. She divides her time between Coromandel, New Zealand and Granville, OH, USA.