On Our Way to the Seventh Day of Creation 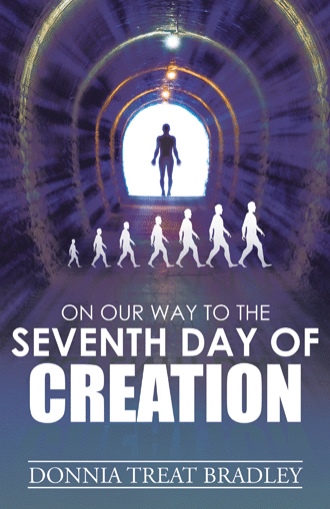 Excerpt from INTRODUCTION After 18 months of constant communication with what I refer to as “they” I was shocked to be told that humans have no idea how powerful humans are. This book is part of what I have learned over the last fifty years from “they.” The reason “they” have no name is simply that information comes from many, not just a small group but a collective of teachers. I am taught by the expert in the field of inquiry. “They” only respond to my questions or needs at the time. The answers come from a myriad of teachers and sometimes I get what I refer to as a lie, but basically this is disinformation. This is why we have been told to discern the spirits. There are actually more spirits who do not have a clue, if you look around at the world this is evident. Which ones would you chose as your spiritual teachers and guides? It is the same in the ethereal world. One very clear message I was given is it is difficult to convey wisdom from the more advanced realms of spirit simply because the same words we use in daily life have dual meanings. Words they use from the spiritual realm are common terms we use today but with these advanced beings the same words can mean something totally different. As an example I was told I needed to bring forth the Christ Child. Oh, my gosh! I already had four children that I was not too good with and now a Christ Child? I was freaked out to say the least. However, the meaning is we each have to birth the Christ that lives within us which is referred to as the Holy Spirit. This Spirit actually resides, like a small egg, in the area of the heart. As we open to total unconditional love and seek inside ourselves, this Christ awakens and teaches you from within. We have been taught by religions all our lives that God is outside of us, but when God made us in His image He implanted the Holy Spirit within the human body. It is referred to as, “breathing life into the body.” If the Spirit is not awakened you are as a dead person. It is just that simple. In fact, the entire process of evolving into an aware Spiritual Being in human form is simple, but you need to understand the process. This world is currently filled with more Spiritual teachers and guides than have ever been before on this planet in human form. My assignment as a teacher is to provide an understanding as to why they are here and why you would be drawn to accomplish this stage of your evolution. Excerpts from CHAPTER ONE Genesis 2:2 ASV ‘And on the seventh day God finished his work which he had made; and he rested on the seventh day from all his work which he had made.’ The ramifications of this statement are huge. This implies we are now in the image of God. I accept that God is total perfection and at the same time a conscious creator, so let’s break this down as it was explained to me. Point one; man is not perfect. Point two; we are not conscious creators. Point three; we are in-between the sixth and seventh ice age, which means we have not entered the seventh period of existence. I am convinced, because of these three points we have not yet reached the seventh day. We have not yet reached perfection or completion in the creation process. And Darwin is no longer significant in this process because his only points of reference were in the physical evolution which did imply the Bibles path of creation. We are taught by religions to do this ritual and that, and keep trying to be better. But those times are drawing to an end. One day we will understand that Freedom of Choice is the greatest gift God gave us. But I want to refer back to: Genesis 2:1-4 ASV ‘And the heavens and the earth were finished, and all the host of them. And on the seventh day God finished his work which he had made; and he rested on the seventh day from all his work which he had made. And God blessed the seventh day, and hallowed it; because that in it he rested from all his work which God had created and made. These are the generations of the heavens and of the earth when they were created, in the day that Jehovah God made earth and heaven.’ This says that it is finished; the process of creation is complete. Man has evolved to perfection and God rested, but as I said we are not there yet. We are still in the sixth day. However: Genesis 2:5 ASV ‘And no plant of the field was yet in the earth, and no herb of the field had yet sprung up; for Jehovah God had not caused it to rain upon the earth: and there was not a man to till the ground.’ One verse says it is finished and the next verse says the seeds and plants were not there and neither was man. But the previous verses say God had created man. The reason for this is very easy to understand. Genesis chapter one, verse one through Genesis 2:4 ASV is a synopsis of the creation of earth and heaven from beginning to completion. Genesis 2:5 ASV is the beginning of a new chapter or book which should say, these are the details of how the creation of earth and the heavens were accomplished. Now we will continue to the details of life during the sixth day of creation.

One of the most heartbreaking experiences of my life was simply asking people questions about statements in the Bible because my life was about the Word of God. People and preachers rarely had any answer except “you have to just have faith.” With all the suffering in the world, as I was a child, it did not seem that faith was doing the job. So I went in search of my own answers, and this book is the surprising result. My first surprise was that it seemed the Bible followed Darwin’s theory up until the creation of humans. Also, there seemed to be information that followed quantum physics. Then I noticed that Genesis gave the entire creation of life from Genesis 1:1 to Genesis 2:4, and then it seemed to start an entirely new book and go into the process of how it was done. I spent almost fifty years reading and studying, and one day I realized we are still in the sixth day of creation. Man has not reached the age of perfection yet. This is also in agreement with the ages of man and the ice age. It was at this time that I felt compelled to put it into a book.

Co-author of two books: WE LAUGHED, WE CRIED; and ALONG THE GAARTX TRAIL. Taught classes on Becoming the Best You can be where attendees changed to the careers of their dreams. I had gone from a young mother with a tenth grade education to CFO of the Kansas Planned Parenthood then on to Yoga Teacher and a consultant in Alternative Health Care. My life long dream has to be write books filled with fifty years of research to help people become all they can be. That research has taken me through multiple world religious experiences that have opened my eyes from the limited views of a country girl raised within a Christian Church to a greater under-standing of God. I now live in Las Vegas NV with my wonderful husband writing my books.