by Elisabeth B. Davidson & Illustrated by Audrey Hale 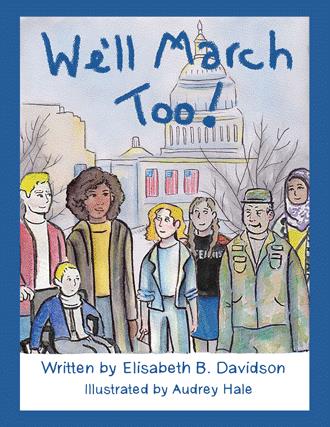 “Thanks for letting us watch you vote, Gram,” said Jaime. “Yeah . That was cool,” agreed Alex. “Yes. It was cool. And one day it will be your responsibility to vote too.” instructed Gram. “We will!” shouted Jaime and Alex. “I was going to make a snack. Would you care to join me?” Gram asked. “Sure. And you can tell us a story,” said Alex. “Well, I probably can tell you a story. What kind of story do you want to hear?” asked Gram. “Something adventurous,” giggled Jaime. “So you think I can come up with an adventurous story?” teased Gram. “Yeah. Like about how you became President?” Alex suggested. “Well. Why don’t I tell you how I got started? It was pretty exciting at the time,” remembered Gram. “About your campaign?” asked Jaime. “No, about the adventure of lifetime,” laughed Gram.

Everyone wants to help in some way. Sometimes it’s hard to know what to do. It’s even harder when you are just a kid. Tired of being just a kid, best friends set out to find adventure and end up finding a way to change their world. This story will appeal to dreamers and change-makers of any age.

Elisabeth has a B.A. in Theatre from Roanoke College and a M.Ed. from the University of Virginia. She is a licensed Reading Specialist with an Adolescent Literacy certificate. She has always dreamed of being a writer. When she was in training to become a teacher, she wrote a 500 word article that was chosen for a professional publication. The short article ended up being a 50 word blurb that sounded nothing like her original piece. Horrified and humiliated by the brutal realities of the publishing world and devastated that her stunning, insightful creation had been slashed to its bare bones, Elisabeth vowed never to share her writing publicly again. So she spent the next 20 years in the classroom encouraging students to find their own voices. When she finally mastered the art of inspiring young minds, she left teaching to practice reasoning with and herding cats. She put all her efforts to observing her cats’ ridiculous behavior. Realizing they slept pretty much all day, she had some time on her hands to start writing again. However, when the cats were awake, they stood in judgment of her constantly. This made the scrutiny of an editor seem not so terrifying. And there the publishing journey began. She marched with thousands of other people that love to be squished together in tight spaces at the first Women's March in Washington, DC in January 2017.