Threat from the Troika 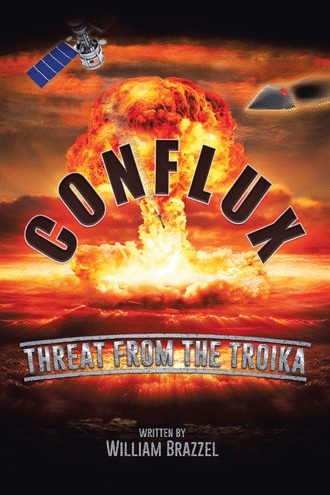 I shake my head in dismay, "From what you're telling me, it appears that the leaders of Deutsche Christen lied, deceiving the well intentioned members of the organization." "Definitely." Mr. Trexler looks at his watch and panics. "Its 1:00 pm Mr. Carrol, and I've spent far too much time here. I've gotta get going. Dietrich has hired some of the most talented and experienced trackers to capture and kill me, and I don't know how much longer I'll be able to evade them. Possessing extensive organizational information makes me a threat to their current and future survival. Having been on the run for the past five months, I've already had several very close encounters with the trackers. So far, I've been lucky." ___________________________ Suddenly, the camera veers off and focuses on the developing incident. While honing in on the scene, I can see the USS Cole approaching the Russian ship as the Coast Guard vessels recede from their positions. In spite of pursuit by the destroyer, the cargo ship defiantly continues unimpeded north on the Delaware. When the destroyer moves in, I hear weapons fire from the cargo ship. As a warning, the destroyer responds by firing a 25mm chain gun at the vessel. Ignoring this action, the Russian crew continues their aggressive behavior. To halt any further attacks and prevent potential injuries to innocent bystanders, a cruise missile is activated. After locking on to the Russian ship, the missile is fired and immediately strikes the side of the ship's hull causing a tremendous explosion, one that racks the Philadelphia area with a seismic tremor. I see buildings adjacent to the shore swaying, while some piers along the river's edge crumble. The shocking scene displays the hull of the Russian ship split in half, as though sliced with the precision of a surgeon's scalpel. I can see remains of the ship and cargo scattered in sparse collections from bank to bank along the Delaware. Among the debris, I view a few charred and dismembered bodies floating. While I watch, Coast Guard vessels descend on the scene removing the bodies of the Russian crew.

A new threat to the United States has emerged within its own borders. Deutsche Christen, a powerful paramilitary organization, led by a ruthless ex-Special Forces Officer, Carl Dietrich, is threatening to overthrow the U.S. government and assume absolute power over the country. Bolstered by the overwhelming support provided by two foreign governments, Dietrich believes his forces to be invincible, and his future rise to power inevitable. Hoping to garner additional members for his organization, he demands an interview with Sean Carrol, an ex-Special Forces officer and an investigative reporter for the New York International News. Dietrich orders that their meeting be held at one of the Deutsche Christen paramilitary camps. To assure Sean’s cooperation, he kidnaps his niece and nephew. Understanding Dietrich’s rationale for the meeting and further realizing that his niece and nephew aren’t going to be released, Sean develops a plan to rescue the children. Desperate, he along with Colonel Gannon, his ex-commander, reorganize his old Special Forces team and create a rescue mission. While tensions rise worldwide and threats of war loom, panic takes center stage, as the prospect for cataclysmic destruction promises to annihilate civilization as we know it.

William Brazzel has worked as an insurance agent for thirty-five years. In his three-year endeavor to create a truly different and exhilarating story, he spent many hours researching history, geography, and current events. William currently resides in Morris Plains, New Jersey. Conflux is his debut novel.