Kissed by a Rose

The Story of My Personal Encounters with Saint Therese of Lisieux 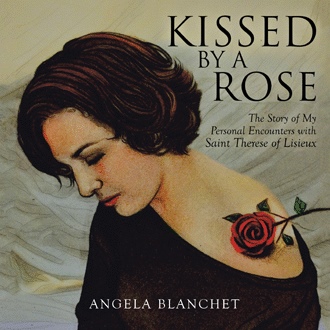 It was a night I will never forget. It was as if I was taken out of this world and brought to another. In fact, that’s exactly what happened. As I was getting ready for bed, my bedroom filled with light, the brightest of lights. I was no longer in my home or in my bed. I was taken somewhere. It appeared to be some type of old house and there was a woman at the front door. She smiled and nodded her head. It was as if she had been waiting for me. She was an unfamiliar woman to me, but for some reason I trusted her. The only words she said were, “St. Therese is waiting for you”. I knew to follow her. We walked past many rooms before she stopped at one particular room, opened the door and motioned for me to enter. There she stood, about 50 feet in front of me. She was a young, beautiful woman with long, brown hair and a radiance about her that left me speechless. I wanted to approach her but I couldn’t. I was frozen with emotion. The feeling of love emanating from this saint was overwhelming. I found myself weeping and repeating the phrase “I love you, I love you, I love you”. I truly love her, but still today I am not sure why my love for her is so real and intense. She called to me. I was so overcome with emotion, I still can’t remember if she called to me with words or a gesture, but I knew she wanted me closer to her. I was trembling as I approached her. She embraced me and I saw her face, her human face that looked at me with the purest of love and gentlest of smiles. My tears continued, and at some point I managed to utter the question, “why am I so connected to you”? She pulled her face back and looked at me with the love of a mother. She smiled and kissed me on my left shoulder and said, “Because you’ve been kissed by a rose so you can heal and help others”. That was not my first visitation with St. Therese, but by far the most powerful one. For days after, my physical body was shaken by the experience, but my soul was lifted. I couldn’t stop picturing her in my mind. She was human. She presented herself to me in a physical body, not a spirit form, and I was in awe of this. Before I had this encounter, I would often spend time picturing what it would feel like to be in the presence of God. I am fascinated with books and conversations with people who have had an encounter with death and remember spending time in heaven only to have come back to the physical world and write about their experiences. Most express the feeling of love to be like nothing ever before, completely overpowering and embracing. This is exactly how I felt in the presence of Saint Therese. There are really no words to describe the feeling of being surrounded by love this intense. I hold onto that feeling in my difficult days. I will never forget it and I long to feel it again. I am blessed with a wonderful family, parents and a sister who love me, two beautiful children and a devoted husband of 20 years, yet I NEVER felt love so strongly before. My very first encounter with St. Therese, was in a dream 5 years ago, where she appeared to me but did not touch me. She asked me to visit a shrine that a family had built for her, only towns away. When I awoke from this dream, I was unsure if it was just a dream. I found it strange that St. Therese would send me a message in a dream. I was raised Catholic, I believed in saints and prayed to many of them as a child, but St. Therese was not one of them. I knew very little about her life, or what miracles she may have performed. For these reasons, I didn’t rush to visit that shrine. I let it go. As the months followed, the dream visitations became more frequent and the request became louder. It became obvious to me that these dreams would recur until I went to visit her shrine. I asked my husband if he would consider taking a ride with me and our two children. Our youngest child is a boy on the autism spectrum, who at that time was six years old. I started to feel that maybe all of this was about praying for him. 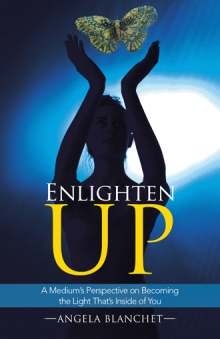 “This book is positively uplifting, beautiful and spiritual.” – Kim Coluccio It is not uncommon for people to pray to saints for their intercessions. In fact, many people have a patron saint that they are devoted to. There have been numerous accounts of healings and miracles performed by saints throughout history. Kissed By A Rose is an astonishing true account of the author’s visitations from Saint Therese of Lisieux, “The Little Flower.” Unaware of who she was at the time, Saint Therese appeared to her with a message and a mission that could not be ignored.

Angela Blanchet is the owner of Center Yourself, a spiritual life coaching and teaching center. She lives with her husband and two children and works from her home in Kings Park, NY, where she and her husband have created a shrine for Saint Therese of Lisieux, “The Little Flower”. The shrine is open for the community to visit and pray. Angela Blanchet is also the author of “Enlighten Up”.