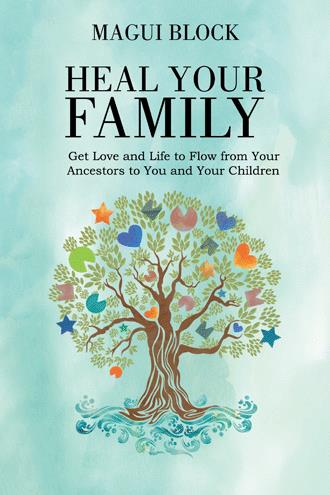 Chapter III. The five keys to healing your family There are many ways of healing a family and I’ve devoted myself to finding the simplest manner to achieve this. I’ve discovered five keys. These keys are the “master keys” of family systems. By using them you’ll be able to open any lock that is preventing you from finding the solution that is ailing you and your loved ones. The five keys are: 1. Include everyone. 2. Get your family in order. 3. Take life energy from your ancestors. 4. Strike a balance between what you give and what you take. 5. Resolve your cycles of violence and find peace. Ready to become familiar with them?   1. Include everyone The two laws Just as there are laws in the judicial system for regulating legacies, there are laws in the family systems. The family has two: the law of the complete number and the law of the right to belong. The law of the complete number. Only when all the members of the family system are included and have a dignified place will there be peace and a feeling of being complete. The law of the right to belong. Any member of the family, regardless of what they are like, has the same right to belong as do any of the others. That is to say, all the members of the family system belong to the family. To explain these two laws, I go back to the example of the tour group. Imagine that you have been traveling for six months through inhospitable countries with a group of people you just met at the beginning of this trip. Over the months, you have spent time together on airplanes, buses and historic tours. You’ve had to get up really early, barely time for a shower, are tired, and have been in every possible mood. You belong to the same tour. You are part of a system. If, on some part of the journey, one of the tourists does not arrive in time to board the bus, the entire group will certainly feel a degree of anxiety. The sensation is: “someone’s missing”. This sensation exists because of the law of the complete number. Every time a system is formed, that is to say, a group of people with a similar intention or of a specific quality, the laws kick in. The sensation of discomfort and of being incomplete is much stronger when the person missing is a family member. Now imagine that there’s someone on the tour whom many of the others don’t like because this person is different. Some would love for that person to be taken off the tour because they believe it disturbs the harmony in the group. However, this person has the same right to belong as the others and must be given a dignified place, that is, be respected and treated as an equal. If this member is not treated respectfully by the others, even though this might not be shown openly, the entire system suffers. Now, imagine that this person is the one who has not made it to the bus on time. Apparently several members of the tour are happy about this and think that finally they’ll be rid of this bothersome person. Yet still the sensation of “someone’s missing” is present and is further exacerbated by an even heavier one, a sensation of guilt because that person has not been given a worthy place. These sensations are evident to some people, while they go unnoticed by the majority. Regardless of what you feel, these sensations begin to tug on you and direct your life unconsciously, as if you were a puppet being pulled about by invisible threads. Who belongs to the family? When I speak of including all your family members you might think I’m referring to the people you have a blood bond with. You might even be including the children that your spouse had with his former spouse and are your adopted offspring. It’s very probable that your list includes that soul mate whom you call “sister” and the uncle who, though not a brother to either of your parents, is very important to you because he’s been present at all your birthday celebrations. A large component of my students include the pets in their family, and I understand them perfectly because I adored my dog and his death hurt more than the passing of my maternal grandfather, whom I barely knew. Believe me when I say I know that what I’m going to explain now might be very difficult at the beginning, but can also be profoundly revealing and healing.

Many of us muddle through life while lugging heavy baggage crammed with an invisible family legacy. Unfortunately, most of us have no idea what is inside the baggage. Even worse, as members are added to the family, they clone the baggage and add more weight. The good news is that it is possible to liberate ourselves and our offspring from a burdensome legacy and ultimately heal and joyfully move forward. Magui Block draws upon her work as a psychotherapist to share cases and personal experiences in order to help families enhance their lives and work toward their goals and dreams. While encouraging others to heal while learning, Block explains how people can unwittingly become trapped within destructive family dynamics, provides discussions and exercises to help with working through them, and demonstrates how to apply a proven therapy method to help families identify entanglements and problems, obtain resources, and transform themselves so that all members can achieve their greatest potential. Heal Your Family shares loving guidance and a proven method from a seasoned psychotherapist that help families free themselves from past burdens and behaviors, heal naturally, and embrace the power of unconditional love.

Magui Block initiated into psychotherapy more than twenty-five years ago, studying various specializations and finally creating her own method for achieving extraordinary results in very little time. Currently, she offers diplomas for training professional facilitators in the Magui Block Method, besides offering consultations and continually creating tools for transforming through love.