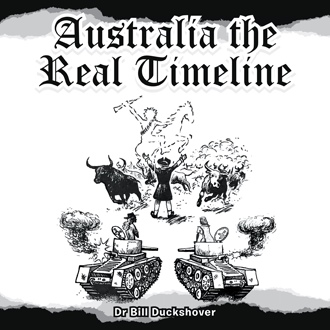 Australia’s original inhabitants are acknowledged as the oldest continuous living civilization known in the world, dating back some forty thousand years. Living in isolation of the rest of the world on their island continent, they evolved a unique culture of harmonious existence based on totally respected, strictly acknowledged territorial boundaries and mutually accepted laws, which were self-regulating. There was no need for governments, armies, police, or jails; and yet they lived a relatively peaceful existence. Anthropological evidence reveals the arrival of international migrants some four thousand years ago. This story explores the distinct possibility that this connection could have led to the introduction of advanced technology that, if adopted and exploited by the locals, would have resulted in a totally different Australia back in 1770 when Captain Cook arrived, intent on claiming this land for his king and country. Maitland sends Cecil along with The Enforcer and Old Faithful down onto the beach to greet the landing party and inform the good captain and his mates that they are not welcome and that perhaps it would be in their best interests to leave. But Cooky’s not having a bar of it, and, well, rather than spoil a good story . . . nuff said.

Dr Bill, Published Author. 2012 burst onto the literary stage with his inspirational work, 'Taming The Ox Of The Mind Essence'. Wombat, more than just The Painter...Truly The Artist. Nuff said.