Empire of the Spirit 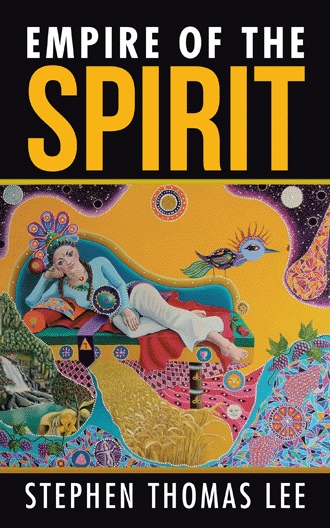 Chapter 1 The Doors of Perception In 1970 I was spiritually reborn, or should I say reawakened, after travelling through the first 19 years of my life spiritually asleep. A new desire quietly and gently emerged from deep within my consciousness, and I discovered that I had strong tendencies to meditate. But it was meditation without methods or techniques learnt from this life. I had no guide or mentor to secure my path. I became centred in my aloneness like some solitary yogi, and developed a passion for something I did not fully understand. During one silent meditation session, I entered into a witness state, looking out into the void of my consciousness. I focused on watching the inner darkness from my mind’s eye, and all body senses moved into the background of my consciousness. I intently watched different patterns, images, and colours come and go, as if watching a movie. Suddenly in the vision of my mind’s eye appeared a single particle of bright light like a shining star. It stood out like Venus does in the night sky. I watched it with considerable interest as unexpectedly, it moved forward in my mind, closer and closer. Its light intensified until my whole inner consciousness was enveloped and penetrated by this light that was now universal, expanding my consciousness outward in all directions into infinity. The Universal Light was no longer outside of my consciousness; — my consciousness was itself that light. • MY ESSENCE IS THE LIGHT. • I AM THE LIGHT. • I AM THAT I AM. Instantly, my intelligence was enlightened to fully understand the universal truth that my spiritual mind is eternal, indivisible, and inseparable from Universal Divine Light. My consciousness was touched by ecstasy, purifying my heart with feelings of infinite Universal Love expanding in a celebration of joy. I felt spiritually cleansed and reborn, my Soul once again back home, blessed by a sense beauty and grace. • I AM LOVE. • I AM JOY. • I AM BLISS. • I AM WHOLE. This was like a light being turned on in my mind and heart after a long journey into the dark night of my own Soul. It was as if I were the Prodigal Son or Daughter who returns home after a long absence in far distant lands. I was full of gratitude and humility for having returned to self-realization of my true spiritual identity. It was my own satori and individual illumination of a spiritual inheritance that is eternal. What a gift I was given in being able to recognize this timeless connection; it is priceless and its wealth is unfathomable. I was deeply humbled and respectful. This one meditation transformed my consciousness and expanded my awareness of the reality of Universal Consciousness. • I AM INSEPARABLE FROM UNIVERSAL SOURCE. And yet, the self-realization of the intelligence and love of the Universal Divine Light suddenly made me feel the deep sorrow of spiritual separation. Have you ever been separated from your loved ones, and when you are reunited in love it brings up this surge of momentary pain and inner sorrow? I instantly recognized that as a physical being, I had been suffering in spiritual isolation and inner spiritual homelessness all my physical life. Wandering in this world as a stranger unto myself, I had been a spiritual amnesic, lost in spiritual dereliction. I not only understood the suffering of being physically homeless in the world, but I now knew the sorrow of spiritual homelessness. Once I had returned home to the spiritual heart of love, I knew the truth of my isolation and emptiness in this world. Spiritual lightning had struck the psychological fortress I had built around myself, shattering my defences and rendering me to vulnerable to the full power of elemental truth. My ego had lost its crown and sovereignty over my consciousness as spiritual light freed me of my encasement in its ridged house. Somewhere in my Soul’s journey on this planet, I had fallen asleep to my true spiritual identity and was challenged to acknowledge that my mind had created this separation. The sorrow was of my own making! Deeply emotionally painful, it felt as if it had been deepening for thousands of years, flowing in a stream of universal sorrow. I recognized that I would have to change and heal myself from this current of universal sorrow that was flowing through my consciousness, because in my natural spiritual state my heart was UNIVERSAL LOVE. The spiritual realization that my identity is inseparable from Universal Spiritual Light and at the same time identified as a physical body is a dichotomy, revealing two totally different perceptions of my identity and reality. I chose to unify this polarization of consciousness by accepting that consciousness is multidimensional. On one hand, I could clearly see that I was now awake, with memory of my true spiritual identity, which could never be taken from me in this life. It was my connection to my spiritual higher self and Universal Consciousness. I am one with the Universal Spiritual Light and its Universal Intelligence. I also accepted the truth that as a physical being, my mind was suffering from the pain of spiritual disconnection and homelessness. I was living in the world habitually aloof from my true spiritual self, despite my awareness that: • I AM WHOLE. • I AM LOVE. • I AM ABUNDANT.

Though we are literally awake as we travel through life, we are often spiritually asleep. What can we do, then, to wake up our souls and have an insight into the unlimited power of the universal mind and manifest the spiritual lives we have always desired? In Empire of the Spirit, author Stephen Thomas Lee opens the doors of perception and shares a warm, intimate, and inspiring spiritual memoir of his own personal journey to find spiritual reawakening. His words are both intelligent and visionary, and he offers a way to become aware of the universal intelligence, which is expressed by our hearts as universal love, universal peace, and universal compassion. Meditation can reawaken the spiritual mind to the universal divine light, and these spiritual revelations can unify our consciousness and help us see clearly and face suffering with a new perspective. Join along on this personal journey—a journey that reveals contact with archangelic messengers and other spiritual guides, and a journey with metaphysical experiences and paranormal events that defy the known laws of physics. These happenings became teaching tools to explore the infinite, boundless, and unlimited power of the universal mind—and they can become for you an inspiring way to be connected to unlimited universal consciousness as well.

Stephen Thomas Lee is a spiritual specialist, who has been passionately interested in spirituality, mysticism, and metaphysical subjects for over forty-five years. He is an artist and educator, and his inspiration and focus is on the intelligence and power of universal consciousness. Stephen currently lives in Tumbulgum, New South Wales, Australia.