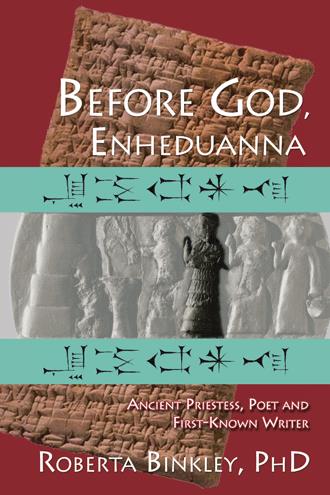 To be completed later with advice of Balboa Press representatives. How long should it be? From what part of the book is it generally taken?

Before God: Enheduanna, tells the story of the first known historical writer. The ancient myths, those stories the high priestess tells about the Goddess Inanna in her poetry underlie and inform the theologies of the three book religions: Judism, Christianity and Islam. Yet only scholars of ancient history and some avid searchers know of the first writer, a woman, a Sumerian poet and priestess, with the unpronounceable name of Enheduanna. This ancient Sumerian woman, a high priestess, poet and princess wrote passionate poems to and about the Goddess Inanna 4300 years ago. She articulates the myths and elucidates a philosophy and theology that underlie both the Old and the New Testament. Speaking personally of her own life, she shares a deep psychological wisdom and knowing that is ageless. She wrote 2,000-years before the Golden Age of Greece, and roughly 2,400-years before Christ. Writing almost 5,000-years ago, on hand-held clay tablets pressing in triangular Cuneiform script, her three hymns to the Goddess Inanna and a collection of temple hymns were Sumerian cultural classics, copied in the scribal schools for a thousand years. Then they vanished. Only when the 1921 archeological excavations by the University of Pennsylvania at Ur in southern Iraq disinterred her image and some Cuneiform copies of her work did Enheduanna re-emerge. Yet, not until 1967 was her first hymn, a masterpiece written to the Goddess Inanna, translated. Her rediscovered work and image necessitate a reinterpretation and reframing of the Western culture canon in terms of psychology, gender, theology, and philosophy. Enheduanna’s place in the pantheon of historical figures may arguably come to rival those of Plato and Shakespeare as thinker and writer. Her voice echoes across almost five millennia, a voice that disappeared for more than three thousand years. Now she returns to a time when people are hungry to know more of the deeper past, searching for the stories and deeper meanings encoded in our cultural traditions. Not only the first known writer, she is also the first known philosopher, mythologist and theologian.

Roberta Binkley, PhD has studied the writing and life of the ancient first writer, the priestess and poet, Enheduanna for more than thirty years, living with her ancient poetry, philosophy and theology. In that process she uncovered a whole new way to understand our history and the origins of Western civilization, a way that shows the power and vitality of the sacred feminine. While it became hidden and twisted over 5,000 years, yet it provided the root stock and even the form from which traditional monotheism grew.