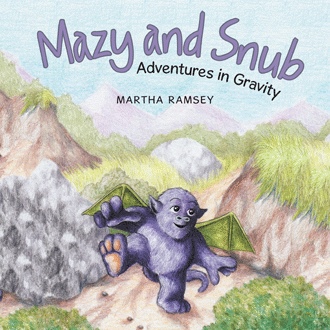 Prologue Mazy and Snub, two blazing sparkles of light, streak through cosmic dust on an amazing journey through the cosmos. A simple thought can take them anywhere in an instant. They travel through expanding universes and explore swirling galaxies of rainbow colored light. They feel no sense of time or space. Worries and cares are lightyears away. Chapter 1 Mazy saw a beautiful vortex glowing ahead of them. A sphere of white light in the center melted into yellow, pink, and purple. A misty ring of blue spirals disappeared into a field of bright stars that flickered like an endless black velvet blanket. Mazy was fascinated by the awesome sight and rushed toward it. Soon she was riding the wispy outer arms of the Milky Way as if it were a carousel. Alarmed by Mazy’s sudden disappearance, Snub high-tailed it to the spiral. He tried to make a grand entrance, but was smacked by swirling tails of space dust and knocked end over end. Righting himself and shaking off some ice, Snub caught a glimpse of Mazy jumping into the twinkling spiral. Snub held his breath and tumbled in behind her. Mazy enjoyed the ride, which felt like gliding down a waterslide, but Snub somersaulted behind her. She shot through the spinning tunnel and stopped to admire a light show on the other side. Pools of color shimmered softly then burst into fireworks of exploding light. “No, No…Oh!” complained Snub, flying from the tunnel. Mazy hovered as she waited for Snub, clapping her hands in delight. She saw a brightly glowing star and drew closer to take a look. The sun seemed to be playing a ball game with the planets surrounding it. While each one was spinning, they had lined up and were running races around the gigantic central sun. What fun! But when Snub arrived, he was so dizzy he was seeing double. Because Mazy was having so much fun, she didn’t notice that Snub was beginning to struggle. She was the one who always came up with amazing ideas and turned to him ready for adventure. “Let’s join the race,” she suggested in a way that said she was going to do it anyway. “Mazy, I’m so dizzy I can hardly move, much less race,” said Snub. He got his name because at first he snubbed some of Mazy’s amazing ideas. He preferred to take a little time to think. “I can’t see behind me, above me, or the entrance back to the vortex,” noticed Mazy. “Well, we’re here now. We’ll just have to wait and see,” guessed Snub. “Wait and see?” questioned Mazy, for she had never waited in her infinite life. A whirl of wind began to spin, mixing their light with space particles and surrounding them in a cocoon. With increasing speed, the cocoon bounced through the sun and passed Mercury and Venus. Inside the capsule, Mazy and Snub experienced unexpected changes. First a doughy substance encased their light, then arms and legs popped out of the pods. Tiny quivering wings shook off the last of the covering, sending Mazy and Snub tumbling through space at an alarming rate of speed. Snub cried, “Whoa!” as the pull of Earth’s gravity caught his new mass. Mazy sang, “Wee…” catching an updraft with her little wings. Chapter 2 Snub landed with a thud. “Ouch!” He looked around and saw rocks, cliffs, a few sparse scrub bushes, and some tumble weed. The air was thin and hard to breathe. The force of gravity pushed and pulled him, as though tugged in every direction at once. “Mazy, where are we?” he asked. He looked to the right, looked to the left, and jerked his awkward body all the way around to face what he feared: Mazy was nowhere to be found. Snub rubbed his little hands together and hopped a bit. He twisted and turned to examine his tail. Feeling a fresh breeze he realized he was waving two small, handsome green wings. He imagined he would need those to cool himself because hot steam had begun to flow out of his nostrils. Snub decided he was going back to that vortex to demand an explanation. That’s where this weird form he was stuck in had come from. Something had gone wrong. There were too many parts to manage and gravity was making him feel heavy. The steam from his nose was so thick, he couldn’t even see. The more he stewed about the vortex, the more smelly vapors gushed from his nostrils. The only way he could get away from the steam was to take a step backward, which bunched and kinked his tail, pinching it in the process! *

Mazy and Snub are delightful beings of light, traveling unencumbered by bodies, time, space, and gravity until an innocent ride on the arms of the Milky Way spins them into Earth’s atmosphere and changes everything. Both are overwhelmed and amazed by their cumbersome bodies, emotions, and pesky gravity, so they set out on adventures equally comical and dangerous. Readers of all ages will appreciate the metaphorical conundrums of these delightful and endearing creatures as they evolve into earthlings.

Martha Ramsey, M.Ed., taught in Montessori educational settings for over twenty-five years. In addition to creating educational materials and writing curriculum, she told stories to her students to highlight issues they were working on in personal relationships. She found that relating stories in the third person allowed students to recognize problems and solutions in a non-threatening manner. Martha moved to California from Ohio to be close to her new Granddaughter, Penelope. She lives with a Siberian husky, Nadia, and a domestic shorthair, Silver. You can email Martha at authormarsey@gmail.com. Martin Kaspar was born in 1989 in Prague where he still lives today. He studies maths at university and started working as a data analyst after graduating. He spends most of his free time drawing and illustrating. You can find some of his work on www.martinkaspar.eu