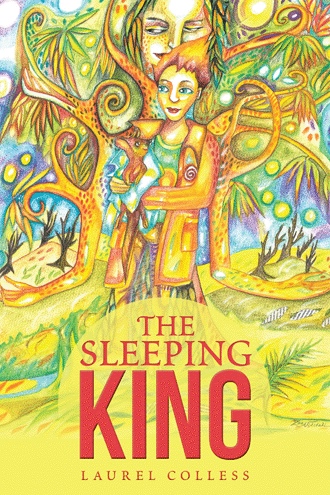 Peter stared out into the gathering darkness at the stunted line of trees beyond the firepit. Their crowns had all toppled in the last fire, leaving only severed arms raised towards the sky. Trees are brave, Peter thought. Trees die standing up. In his dreams, Peter sometimes heard the souls of the trees howl. Suddenly, his senses were alert. He could hear howling now, coming from the bush. “Did you hear that, Mr Biggs?” Peter called behind him. “Nonna was right. There is something out there!” Mr Biggs, seated under the porch light, hurriedly folded his newspaper. He set out across the now-darkened lawn, calling back, “Be right there, Peter!” “Something’s coming!” Peter shouted. A flaming shape lit up the darkness, careering down into the firepit, then up and out again. “It’s an animal! On fire!” It was bounding in a direct line towards Peter. Instead of running clear, Peter surprised himself by wrenching off the GAIA jacket and swinging it like a bullfighter’s cloak in front of the flaming animal. “Peter, no!” Mr Biggs called, too late. Peter dragged the animal to the ground, smothering and staunching the patches of flames that leapt about its fur and skin. By the time Mr Biggs had puffed to the scene, Peter was already gingerly pulling up the jacket to show an injured wallaby collapsed on its side. The whites of its eyes glowed. It was only when the thick smell of roasting flesh caught at Peter’s nostrils that he gave up being brave. “Help! Help! Aa-a-a-a-a-a-a-ah!” “Shh!” Mr Biggs locked his big-bear arm round Peter’s shoulders. “You did well. It’s all right now.” Peter was gulping for air, but the choking smell of smouldering flesh hung thickly around them. Mr Dean pulled up behind them and sputtered, “What is it? A kangaroo?” “No, a wallaby!” Peter could tell by the smaller size. It was about four feet long. “Peter’s right,” confirmed Mr Biggs, kneeling unsteadily on the hard ground. “The poor fellow’s passed out; from the pain, probably. What shall we do?” “We have to save him!” wailed Peter. “Oh Geez, what a stench,” complained Mr Dean. “Shut up!” said Peter surprising himself again. “Either help, or go away!” “All right, all right. Don’t go bush on me; I’ll help. For starters, go and get that so-called cook of yours. She’s supposed to be a nurse, isn’t she?” “Good thinking,” agreed Mr Biggs, adding, “And don’t let Matron see you.” But Peter, already sprinting to the house, didn’t hear. Angel, led by Peter, arrived quickly. She was carrying a medical kit. Nonna LaRosa and Mrs Millet followed close behind Angel. “What is it?” squealed Mrs Millet. Mr Biggs replied, “Shh. It’s a wallaby. … The poor thing was actually on fire … arrived right at Peter’s feet.” “Is it still alive?” Angel asked doubtfully. “Of course it’s alive!” sobbed Peter, falling to his knees next to the wallaby’s slender head. “Just a moment ago it was bouncing across the firepit.” Peter stared hopelessly at the raw gashes that cut deeply into the animal’s blue-grey fur. The wallaby’s throat began to contract, emitting a strange sound like the boing-boing of an uncurling spring. “Oh Geez,” said Mr Dean, recognising the sound of death. “We have to save him!” wailed Peter. “We have to!” “Well, I’m not a vet,” said Angel. “But I can try!” She produced a syringe from her kit. “Attention, everyone, and hold.” Instinctively Peter, Mr Biggs and Mr Dean clamped their hands gently onto the wallaby’s hindlegs, while Angel, dodging the most-wounded areas, deftly released a series of painkillers into the animal’s rump. Next, she began swabbing antiseptic from a bottle all over the wallaby’s open wounds. “He is going to make it, isn’t he?” Peter asked. Angel, feeling for the pulse on the wallaby’s neck, didn’t reply, which Peter took to be a bad sign. “What do you think?” Mr Dean asked her grimly. “I … I’m afraid it isn’t good.” Angel looked up sadly. “I’m not a vet, but the wounds are pretty advanced. It’s hard to be hopeful.” “Please don’t let the wallaby die!” Peter begged. Nonna exchanged a look with Angel, but neither of them spoke. “Well, there’s barely a pulse,” Angel said with a sigh, her hand searching for vital signs around the neck artery. Angel bent her head, putting her mouth close to the animal’s head, then set off into a high-speed whispering prayer, her face rising and falling against the prostrate wallaby’s ear. Peter guessed she was using the ancient language of her people, the Aborigines. Everyone waited in silence. Peter reached forward to stroke the blue-grey fur. He could feel the life force seeping from the wallaby’s soft body, almost like water emptying from a tub. “I’m sorry. It’s time to let its spirit free.” Angel patted Peter’s shoulder. Peter began to cry. “It’s not fair! It’s not fair! I hate fire! I hate nature! Why does everyone have to die?” Then, as if in response, an unexpected thing happened.

Legend holds that in centuries past, a great king was laid to rest, leaving a promise to wake again when the world would need him most. Could eleven-year-old Peter Blue be that sleeping king? “He sleeps more than we do!” complain the old people at the Gum Tree Rest Home in the Australian bush, where Peter has lived since his parents were killed by wildfire. When a pesky wizard-type pulls Peter out of a nap, telling him to wake up and save the world, Peter isn’t interested. It’s only when a strange clue in his birthday treasure hunt leads him to Dad’s Global Advanced Intelligence Agency (GAIA) jacket that Peter starts to change his mind. In the pocket, he finds a card for Spiral Hall—Secret School for the Ecodemically Gifted. The Anthrog forces are rising on earth. They feed on the stench of human greed, and right now it’s a free lunch. The Anthrogs also want to get to GAIA using Peter’s high-tech jacket as the key. Can Peter get to GAIA before the Anthrogs get to him? Peter Blue’s legend-inspired story combines the magic of a child confronting a promise from another lifetime with the realism of climate change, which Peter and the initiates at Spiral Hall are destined to take on.

Through storytelling Laurel Colless inspires children to take the lead on big world problems like climate change, extreme weather, and plastic pollution. That means drawing wisdom from all the intelligences available: from super-technology to trees, and even from the croak of an occasional frog. Laurel brings a background in environmental business and literature to create a new kind of myth-making that reflects the reality of today’s children – separating from nature and from each other. Laurel Colless is an Al Gore Climate Reality Leader and founder of the Carbon Busters Club.