Life, Love and Other Misadventures. 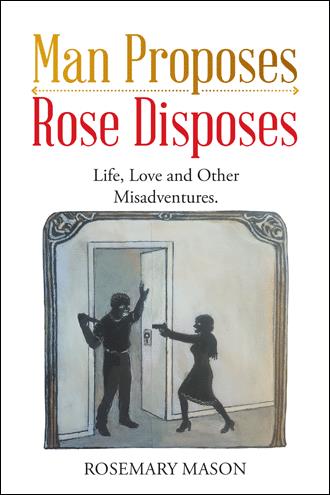 Uneasy, she took the gun out of her beaded bag and made sure it was loaded, ready to fire but with the safety catch on. Then, with the door key ready, she got out and locked the car quickly. She unlocked the kitchen door, fearing that someone might slide off the roof that sloped down to just over her head and attack her. She opened it to go in and blocking the way was Jenny's little cat, Cindy, with her hair all standing on end, stopping her. “Go in, Cindy, quickly!” said Rose. She pushed past and shut the door, but Cindy had gone. The light was on as she had left it and she felt safer. Normally, she'd have boiled the kettle and made coffee, disarming the gun and putting it back in her bag before going to bed, but, because of Cindy's behaviour, she kept it in her left hand as she unlocked the iron door to the bedroom section and pushed the door open. Strangely, there was something stopping the door from opening fully. Rose pushed harder and felt a sliding movement behind it. “Oh! My God! There's someone there!” She just had time to grab the gun from her left hand, letting go the door as a huge black man slid out with his hand up pointing a knife at her. Rose screamed as loudly as she could, and It stopped him dead still for a moment; enough for her to flick the safety catch off and start firing. “Don't hit the door!” thought Rose “The bullets may ricochet into you.” a lightning shift of aim that made her miss her target and hit the newly plastered wall of the passage. They ricocheted with a loud whang behind him and she finally realised her error and tried to aim closer but, in that split second, he grabbed her and dragged her into the dark passage with her struggling to turn away and clutch the gun close to her body. She counted four shots and had two bullets still in it. Down she went, face forward, on her knees and then flat on her face with him on her back. That winded her for a moment but the scuffle went on as he pulled her round and she saw something moving next to her as he tried to pull her over. It was a khaki mass of body and she had the gun still in her hand, free, right there so she fired at it – one – two? There was a click. No sixth bullet! Then she recalled that her brother had fired one at a tin out at the farm. She put on the safety catch anyhow and felt the body slide back on her back and his knife at her throat, pressing it. “I'm going to kill you now!” he said. “Oh! my God!” thought Rose, “I'm going to get my throat slit and die in a pool of blood and that's what my children will find if they get here.” She felt a deep sense of pity for them. Then she rallied and thought what to say. Out poured the strangest words Rose had ever used. “Oh, please don't kill me! Killing's a terrible thing! I wasn't trying to kill you. I only shot you because I was frightened, I wasn't trying to KILL you!!!” she gabbled on, thinking she was being a bit senseless! To her surprise, his hand went down. The knife was no longer at her throat. She thought she’d charmed him. Actually, she hadn't. One of the bullets had lodged in his shoulder! She raised herself up on her elbows and turned her head, straining to see his face. She thought “I've had my first reprieve. If I get out of this alive, I want to be able to identify this bugger!” She tried another tack. “Who are you?” - answer - “You don't know me!” Try another stupid question, thought Rose – buy time! Where was everybody? Surely, they had heard the shots?! “What do you want?” Probably money, she thought. “I want you!” Oh my God! I've got a rapist! Don't struggle. Don't scream. It makes them worse. Try a casual approach. Don't panic! “Oh, that's alright! -- but I have money – LOTS of money!” Silence. He was thinking! Good! “Where is it?” Oh, no, my boy! I'm not telling you that. You'll kill me. “I'll get it for you!!' she said. She didn't have a bean in the house. Silence. “Give me your gun.” … Check the safety catch is on. Empty, surely. Hopefully! “Here you are, you see I'm not shooting you any longer.” She handed it over her shoulder. Damn! He might bash me over the head with it. She felt him getting off her back! It was her second reprieve. “You get up.” he said. Rose sat up slowly and turned her body to see him. In the light from the kitchen, she saw him standing there, gun in one hand pointing at her and knife in the other. With his knees sagging in his khaki trousers, he looked for all the world like a cowboy! She had a fleeting ridiculous memory of the film “High Noon”. Creep up as slowly as possible! There's no money! Where is everybody! She was half up when suddenly he fell backwards flat on the floor. Rose leapt up! What to do? Run past him to the phone. Phone the police? NO! He might wake up and grab her ankle. Run for it! She ran to the back door. The key was still in her left hand, together with her bag. Her stole was still round her shoulders. She began to go into shock and was shaking so violently, she couldn’t get the key into the hole. Every moment she expected to be grabbed again from behind.

This is a highly entertaining memoir of a somewhat colourful character dispatching husbands, lovers, murderers, and maniacs in various ways and shooting a rapist in the groin, surviving to the age of ninety-one to write the story of her family’s arrival in Rhodesia and their survival through a terrorist war. In 1980 Rhodesia became Zimbabwe, and the total collapse of the economy began. By the year 2000, most of the Europeans, including all her family, had died or left the country, and Rose was alone in her house with a pistol for protection, fighting off intruders best she could, finally leaving Zimbabwe to live in Australia with her daughters. Taking what she could fit in her car and the maximum holiday allowance, she skipped the country for good. Stripped of all her life’s savings in Zimbabwe by the collapse of the economy, she considers herself lucky to be alive to tell the tale. The details of some of those encounters are extremely funny.

Rosemary Mason was born in Rhodesia in 1926. As they moved from place to place, she went to Penhalonga, Sherwood Starr and Gatooma schools and both Chaplin School and the Convent in Gwelo. For sixty years, she was active in the theatre, singing, acting and directing plays and musicals, also designing and painting sets. She was awarded a trophy for her sets for Arthur Millar’s “The Crucible”, the Umtali Player’s National Theatre entry. Also, she received the Rep’s Theatre award for excellence for het sets in Salisbury, Rhodesia. She appeared in the T.V. series “Thinking about Africa” shot at the Victoria Falls in the late eighties. Her life’s adventures spanned several continents and numerous relationships, some less hazardous than others, also several proposals, two marriages and two divorces. Becoming more fearful for her life alone in an increasingly lawless Zimbabwe, she left to live with her daughter, Sherrell, in South Africa and they both left there seven years later to live with her other daughter, Jennifer, in Australia.