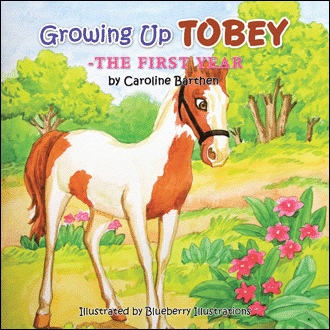 Growing Up Tobey, the first Year I guess as far as beginnings go, mine was not much different than everyone else’s in this world. My birthdate is May 11, 2001. I was born around six in the morning, and by the way, I’m a horse. An American Paint Horse to be exact. My name is Tobey, but my friends call me the toad. Don’t ask me why, I have no clue! I was born in a nice barn with lots of straw to sleep on. My mom, Sidda was there with me of course and so were my human moms. You know humans are kind of different…they stink! I mean compared to me and my other horsey friends! Once you get used to them thought, they are pretty good to have around. After all they know where the food is kept! My first day was kind of a blur, so I will tell it to you like I heard it from my mom Sidda. She says I got up pretty quickly, but I didn’t act quite right in the head. This worried my humans so the called my doctor, also known as a veterinarian. He asked what I was doing and they told him I was hugging the walls and walking in circles and wouldn’t nurse. I don’t know if I believe this though, I mean, do you know how hard it is to hug a wall??!! Anyway, he said to watch me and if I didn’t get better soon, he would come give me some medications because I might be a “dummy” foal. I thought that was kind of rude, I mean I hadn’t even met the guy yet and he was calling me a dummy! I finally figured out that my mom had the biscuits and quit walking around in circles after a couple of hours and was doing well. The next day Dr. Bruce came out and checked me out and gave me a shot. The shot was supposed to make sure I got all the good stuff from my mom’s first milk so I would be healthy. Geez, I finally meet the guy and the first thing he does is stick a needle in me, what an introduction! After a couple of days I was let outside with my mom and this was soooooo cool! I ran and ran and ran and well, you get the picture. The sunshine felt so good and there were all sorts of neat things to explore and learn about. My mom didn’t let me out of her sight and kept telling me to stay out of stuff, but I still explored anyway. After a couple of weeks, I was allowed to go out with another foal and his mom in the pasture. At first I wasn’t sure this was such a good idea, I mean someone could get hurt or dirty playing you know! After a couple of days though, Powder, that was the other foals name, and I were running and playing and we would pretend to fight by rearing up and boxing with each other. If we got too rough, one of our moms would come over and tell us to calm down or she was going to separate us. This went on all summer and if it was too hot during the day our humans would put us in a stall so we could have a fan and so I wouldn’t get sunburned since I am almost all white! This was great, we were cool during the day and got to stay out all night. The world is really neat at night, you get to see the deer and raccoons come out and occasionally a wild pig would even pass through! Our humans played with us a lot also. They put this thing called a halter on me when I was just a few days old and then would put it on and take it off, so I would get used to it. At first I didn’t like the restrictions of wearing it, but I got used to it pretty quick and besides if you didn’t have your halter on, you couldn’t get lead in and out of the pasture! I guess halters aren’t so bad after all. At the end of the summer we were big enough to be what they called weaned. This means we were big enough to eat our own food and didn’t need to stay with our moms all the time. This would have been a horrible experience except they put us with this really cool horse named Scotty. He is sooooo neat! He used to play polo and has done EVERYTHING!!! You should hear some of his stories! They could be a whole other book. Scotty let us play and be babies, but he kept us out of trouble and taught us how we were supposed to act. He would even scold us when we were bad. In September, Powder got sick and had to be taken to the horse hospital. He has a very bad belly ache. He even had to have surgery. I saw him once while he was in the hospital. He was so sick. We talked for a while and he told me he wouldn’t be coming home, but not to worry because I had Scotty and I had to take care of my humans. A few days after I saw Powder he went to live in horse heaven, because although my humans and the doctors did all they could, they couldn’t make him better. That was a very sad day for me, but Scotty and my humans helped me understand it and told me it was ok, that Powder was in a much better place. That must be one awesome place is all I have to say, because this place is pretty cool!