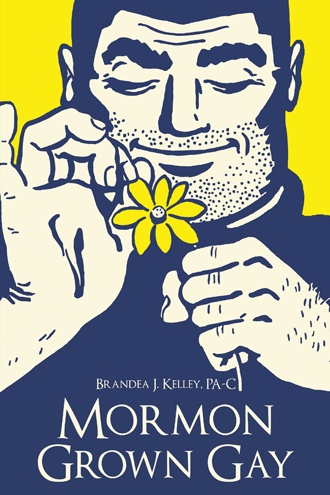 The intent of this book is to encourage and inspire individuals to love who they are when they find themselves outside their cultural norm, and to thrive in their difference instead of striving to change or hide it. Brandea does this through sharing her own story, a long and bumpy, sometimes hilarious and sometimes heartbreaking road to self love and acceptance. This book is not limited to Mormons who are gay. It speaks to a larger audience of any who feel demoralized and judged for being different than the majority around them when they are true to who they really are.

It’s a story of one who deviated from the heterosexual majority knee deep in the Mormon heartland, and underwent considerable religious and self persecution as a result. Through many experiences, failures, attempts at otherness, and finally success in self acceptance, she has shows that a truly happy ending awaits if you can learn to embrace who you are, who you love, and allow your highest self to emerge.

Her secondary intention is to assist those who are trying to help, love, support, fix, or understand the people going through this experience. By sharing the stories and experiences offered by her family and friends, she shows the many different perspectives that loved ones go through. Their perspectives coupled with hers can help guide your actions to be optimally conducive to healing and progress, while avoiding the murky and discordant pitfalls of divisive blaming, shaming, and disassociation. Foster parents, social workers, parents, family members, gays or bisexual, transgendered queers, counselors and therapists, teachers, Mormons, those fascinated with Mormonism, atheists, Muslim, Catholics or confused friends can find insightful support and solace through these well written, honest accounts.

How do you get through this fracture? How do you gain faith in the fact that you are perfect the way you were made? How do you reconcile the perceived loss of your culture, family support or your spirituality, and how do you find new spiritual building blocks having only ever known one way? How do you then convince others that you’re not broken and you don’t need fixing?

This enlightening memoir offers deep and valuable insight to an often difficult and tumultuous time. She brings levity to the topic, and provides an entertaining and uplifting journey through the experience of discovering and embracing the higher self that is awaiting discovery in all of us.

Brandea J. Kelley was born and raised in the Mormon heartland of the Utah valley. She now resides happily in Seattle, Washington, with her wife and two children, enjoying the close relationships of her extended family and friends. She received her BS in psychology from the University of Utah and worked as a counselor for troubled youth prior to joining the Peace Corps in West Africa. She then continued her education at the University of Washington to become a physician assistant and has practiced in oncology, urgent care, and surgery in her twelve years as a physician assistant. She is a human rights activist, art and music enthusiast, voracious reader, spiritual seeker, qigong, and meditation enthusiast, lover of the outdoors, and recovering Mormon. She is honored to serve on the board of two nonprofit agencies: Global Impact (providing health care and service work to those in developing countries) and the Institute for Qigong and Integrative Medicine.