An Incredible Journey of Discovery into Consciousness Interdimensional Life & UFO’s 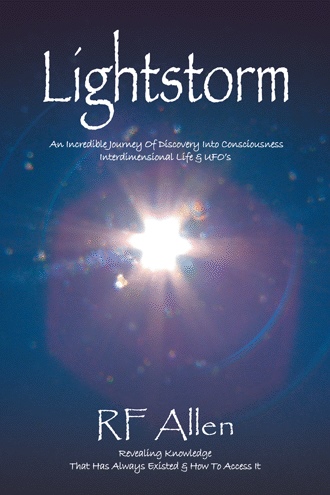 Cycles of civilization have taken place in the past. A new cycle is about to begin. This book, the photographs, and messages that accompany them, are meant to help awaken you, or to further awaken you to your destiny, to encourage you to find your own path. To show where truth is found and can be accessed through your own intent. As each person seeks their own answers, with no preconceived notions of how it should be, the Source of all Knowledge opens its embrace and teaches through Spirit, Light, and Energy, in other words, Love. Receiving Truth (Source) becomes a natural event. Beyond Disclosure While much of the First World is anticipating the revelation by governments of the official existence of UFO’s and extraterrestrial life, people are concentrating on what they feel the government should or shouldn’t do while failing to notice what is happening all around them. In the overall picture of existence much has been revealed and is visible to those who know where and how to view it. Some governments are partially aware of some of the higher technology available and have made use of it in some cases. This information of higher three dimensional technology has been and continues to be used in the distribution of misinformation and the spreading of lies laced with bits of truth to keep the American public, and the rest of the world, guessing. If we choose to listen and believe what is released by them and other entities bent on continuing global dominance, we continue to fall victim to their web of fear and deceit. In actual fact the governments only know a fraction of what is available. One major key is knowing where and how to seek information. Mankind has been manipulated and misinformed through intradimensional contact, with only a small amount of truth intertwined with what are mostly lies meant to deceive. Finding Truth involves looking beyond what is physically visible and training yourself to tune in to the vibratory fields that exist all around us. Life is interdimensional and within each dimension exists frequencies and vibrations, at times overlapping. Life exists in all these fields. It exists in infinite shape and form. Every thing that exists is, in fact, alive. It is all Energy, Light. The entire world will be challenged to expand its’ previously limited way of thinking due to what is now becoming known, seen, and photographed. There will always be an opportunity to either accept or deny what you see and experience. The opportunity to ascend to another level is yours. Our cosmic family is here to help. Keepers Of Mother Earth Earth has been dealt a short hand through this present cycle of civilization. There have been small cells or groups of indigenous tribes that, to this day, still honor Earth. They are ‘Keepers of Mother Earth.’ They know we are not alone in our journey and that we shall not ascend without Her. Mother Earth is in the Ascension process at this very moment. She is moving through the necessary stages just as those individuals who want to ascend. There will be some catastrophic events taking place. Events much more dire than we have experienced to date, but this is all necessary as Earth ascends. These are times of great fear for those that do not, or will not understand. Earth must go through these changes. As it does there will be a separating of the new world from the old. Those of humankind who are choosing to ascend will move on with the new Earth. Those still believing religion is their salvation will remain and witness the continued violence and destruction that is presently infecting the Earth, while the new Earth and its inhabitants continue the process of Ascension even beyond the perfected physical form to that of ‘Light Beings’, moving out into the Universe assisting other worlds in their Ascension process. All this because of Love and Compassion for Creation and Life exercising free-will.

Much of our world is in bondage and is abused, exploited, and manipulated. It is most obvious in the Middle East as thousands are murdered and millions displaced, driven from their homes and towns by the same conquering spirit that has destroyed throughout history—greedy, egotistical, self-appointed murderers and thugs who have separated themselves from common sense and invented reasons to destroy, claiming justification and exaltation through their god. Those in the West who profess freedom are also in a grave dilemma. Materialism is so powerful in blocking earth energy (hiding the true reason they have incarnated on earth) that other members of our cosmic family have offered to assist those who are awakened. The desire of our universal family is for all mankind, east and west, to have the opportunity to awaken, to experience consciousness through source. Liberators are with us today, not involved in the shedding of blood but in the shedding of ignorance, of hopelessness, of abuse (physical, emotional, and psychological) for those who will receive it. Valiant, noble souls are standing ready to help and support the unfolding of that divine source in each individual that chooses to know and embrace their own higher consciousness.

Life’s inspiring journey Life is a journey, and like every journey, there is a destination. The destination prescribed by our parents is mostly based on their desires for our success and happiness based on their life experiences. As we walk our way through life, we are met by obstacles and challenges. Some of them are placed there because of our own doing. Some are placed there due to following the path that was chosen by our parents, and we feel obligated to follow them so as not to disappoint them. More obstacles are placed there because of other outside influences that have convinced us that they know better about what is needed in our lives than we do. These are the same experiences that the author has dealt with in his life. With one single comment his father made to him at age eight, his life journey would take him to many faraway places in search of truth. Truth he assumed he would find in the religious and social teachings of his parents. Four generations of ancestry couldn’t be mistaken. They were all seeking the same thing he was. He had to find the truth where his father told him he would, but he didn’t. With a profound desire to not only find his direction in this life but also to help inspire others to do the same, he has found great happiness and peace in sharing his life experiences with all people. Having lived in eight different countries as a professional in his field, he has witnessed much turmoil—socially, culturally, religiously, and economically—in every country he has lived and worked. His powerful story and witness has reached the hearts of many throughout the world. This journey of the soul is his journey. His connection with that higher source is felt in his words and in his desire to help elevate the consciousness of all humankind. To increase the vibrational level of the earth that he loves so dearly. The destination he has sought in his life is within view. His experiences and incredible library of energy and light photography are having an impact on lives across the globe. His message can help change your life. Moshe