What in Hell Do You Want? 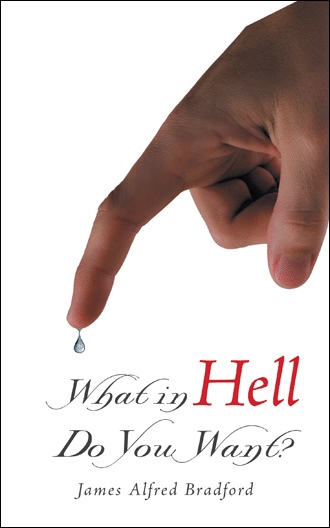 INTRODUCTION THE PRE-ROG-A-TIVE “A right of privilege exclusive to a particular individual or class. Entitlement, right privilege, advantage due, birthright!” Obdurate – stubbornly refusing to change one’s opinion or course of action. Stubborn obstinate, intransigent, inflexible, unyielding unbending, pigheaded, bullheaded, mulish, stiff-necked, unmovable, uncompromising, iron-willed, determined. It’s easier to build strong children than to repair broken men.” – Fredrick Douglas In every man and woman there is a little child, and in every man and woman there is an adult. In our lifetime, have we really lived or just existed? Along the way we have called on the child or the adult in us to act out some type of situation. The child always seems to symbolize hope more than hopelessness. The child never presents a threat; it seems to be able to revisit their life from adolescent to present day. The adult in us doesn’t understand childhood or adolescent, because it has no experience of this. It only knows adulthood. Oh, don’t get me wrong, adulthood has unlimited education about childhood, but experience…no. Case and point; in the story the Richman and Lazarus, Lazarus is a broken man in his body. His body cannot function like other men. Honestly a good percentage of his body doesn’t work anymore, or never did…period. However, the child like faith in him holds on to the Lord God. Lazarus’ name means “God is my help.” He chooses to hold on to his faith. He is determining to live his life through Christ. He chooses not to pout or have a pity party. In this physically brokenness he sees wholeness in himself, because he doesn’t see through his natural eyes, but through the eyes of understanding, his “imagination.” Albert Einstein said, “Imagination is the key to higher awareness.” Enlightenment! Paul the Apostle in the book of Ephesians said, “The eyes of your understanding being ENLIGHTENED, that you may KNOW what is the hope of His calling (God’s calling); what are the riches of the glory of His INHERITANCE in the saints.” The story of the Richman and Lazarus God is never mentioned neither is the Devil. Living a Christian life or not living a Christian life is never mentioned. Let me ask you this question, have you ever been in a situation where you had to spontaneously had to show who you really are, or what you really stand for? You know on the spot, no script, no preparation, like being in a foreign country, don’t know the language and you’re by yourself? Or jump in a body of water to survive and you can’t swim? Or moving away from family and friends and everything that’s familiar to you? Did you find the strength and endurance you needed the mental stamina to go on even when you felt you didn’t have one ounce of strength left? Enlightenment can be your egos greatest disappointment. Lazarus said within himself, “I am somebody, I am a winner, and God loves me, because He made me.” Now the Richman his name alone says it all! His name reflexes his thoughts. He saw with his natural eyes. As a man that has made it, successful, and powerful. The picture of the “The American Dream,” or the world’s dream, and that’s ok. Prosperity is a good thing. Jesus says, “A man will not be judged by the things he possesses, but by the things he gave.” On center stage Lazarus takes the lower road…humility, good behavior and the Richman acts out narcissism, bad behavior. God gives us freedom of choice, that’s our PREROGATIVE! Don’t get me wrong a broken man can be wealthy also and just as a Richman can be good and humble. It’s not the situation they find themselves facing it’s the mindset about it. Brokenness can be as hopeless because of one fiasco after the next, just giving up on life and people. Not being able to fulfill that most precious desires or heartfelt dreams. Because of brokenness people will go out on spending sprees or food binging, isolating themselves from others in their own anonymity or inimitable fashion. The ego only sees your life with your natural eyes, and that is limited. God validates you! God defines the Richman in that He gave him monetary security, but the Richman just saw himself. He saw that he was the reason for his success. Not God or not claiming to know God, who knows? The outcome tells the story… The story of the Richman and Lazarus is about knowing God, and about not knowing God.

What in Hell Do You Want? is taken from the parable of the rich man and Lazarus with a surprising twist. Hell can be in your mind. Hell can be in your job. Hell can be a living, breathing part of you. Hell can also be stopped. Good habits are learned just like bad habits—through practice. It brings awareness of the decisions and choices a person makes and their impact on his life. The power of knowing is what you live by. The rich man lived abundantly, and Lazarus lived in obscurity. Why?

Bradfords’ early training in music was with Smokey Robinson. James founded JAB Ministries - Word of Faith in response to the needs of hurting men and women, both within and outside of our churches, who are searching for answers to their everyday challenges. “What in Hell Do You Want?” is taken from the parable “The Richman and Lazarus”, with a surprising twist. Hell can be in your mind. Hell can be in your job. Hell can be a living breathing part of you. Hell can also be stopped; good habits are learned just like bad habits…through practice It brings awareness of the decisions and choices a person makes and the impact on their life. The power of knowing, knowing is what you live. The Richman lived abundantly, and Lazarus lived in obscurity…. WHY?