The Adventures of Stirling 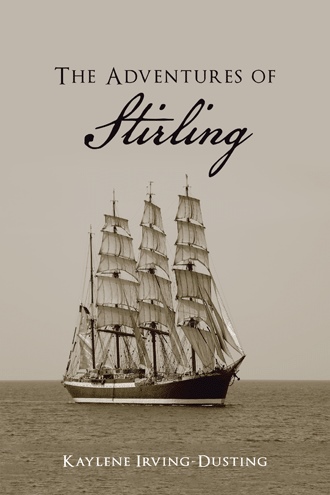 The adventures of Stirling by Kaylene Irving-Dusting A cold misty morning it was for the passengers who were boarding the ship that was heading for Australia. There were families and business men who were hoping to make a new life in the new settlement on the other side of the world. The ship gently rocked in the water and the sails were protected by the wind. A young girl named Abigale was joining her family on the ship. She noticed men working in the cargo part of the ship. They had no shoes and their clothes were rags. The men had hats and their hair was cut short. The ship’s captain had to make room below for it had become overcrowded and the ship wasn’t in a good condition for a long journey. The ship was packed with supplies for the journey. Once the cargo was filled and the passengers had set up their sleeping spaces the ship was cast away from the dock. It was slowly pushed along until it reached the end of the harbour where the sails were opened up to catch the wind and sail with all its force. There were plenty of other ships that were sailing and in many directions. All the ships were made from the same wood and had the same sort of sails. The names were common and had no importance other than to be a ship to possess whenever there was the need. The water grew unstable as they went out farther and it took some time for the passengers to acquire sea legs. The passengers gave themselves tasks to fill their time during the journey. Abigale found some girls around her age to play with. The other girls talked about how their fathers were to be important business men in the new settlement. Abigale’s father was not of a noble trade but had relatives who had settled in Australia and were making a good living. The girls teased her and told her she would make a good wife for a convict. Abigale grew tired of them and started to avoid them. There were not many places to hide on the ship but Abigale found a way to get near the cargo hold without being seen. She found steps that led down to the lower decks. There were a lot of hammocks set up for the crew. There were some men asleep in the hammocks and some men were walking around the decks. There was noise from the men who were playing games and drinking to pass the time. A fight broke out and more men came over to stop it or join in. Abigale kept exploring the ship. All the decks were full of people and Abigale went back up to the deck that went to where the passengers were settled. There was a large crate that had holes in it. The crate was supported by ropes and was hidden amongst other crates. Abigale went over to it and looked at it. There was a hole large enough to look through. Inside Abigale could see something moving. There was something moving towards her. She moved away from it as large, hairy and dirty hand tried to break through the hole. ‘Who’s in there?’ she cried. ‘My name is Jeremy and I’m a political prisoner’ said a deep voice. ‘Why are you a prisoner?’ she asked. ‘I was a poor boy who wanted to marry a rich man’s daughter. We were going to run away together but we were caught by her father. I was sent to gaol and she was sent to live far away’ ‘Why are you in this crate like an animal?’ Abigale asked the prisoner. ‘The prisons were getting too full and Mr Nightingale has paid to send me to this ship. Where are we going?’ ‘Australia’ she answered.

It is a cold and misty morning as passengers board a ship heading for Australia with hopes of making a new life in the new settlement on the other side of the world. As nine-year-old Abigale Sherman joins her family on the ship, she has no idea of what lies ahead.

Aft er she makes new friends who soon begin teasing her, Abigale begins exploring the ship—a decision that leads her straight to a political prisoner caged inside a crate. After she sets him free without realizing he intends to unleash an evil plan, Abigale is thrust in the midst of a tragedy that causes her life to take an entirely new turn. As she is led to Australia and to a life she never imagined with a new family, Abigale must somehow summon the inner-strength to overcome her challenges, shun bad influences, and find lasting love despite seemingly insurmountable obstacles.

In this historical tale, a young girl immigrates to Australia during the 1850s where she attempts to begin a new chapter while battling criminals, poverty, and herself.

Kaylene Irving-Dusting has completed year twelve of schooling and holds a Victorian certificate of education. Her interests are historical and classic fiction as well as anything written by Jane Austen. Kaylene is a single mother of two who resides in Bendigo, Australia. The Adventures of Stirling is her first book.