The Secret Place of the Most High 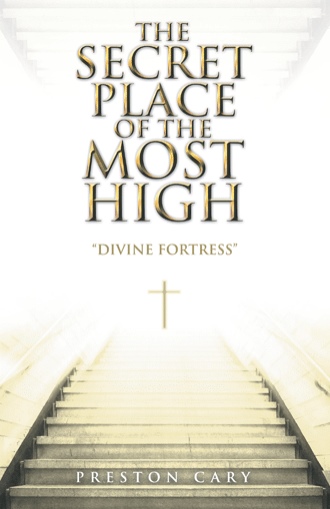 CHAPTER 1 “THE SECRET PLACE” There he was, a soldier badly wounded and in severe great pain running for the shelter toward the mountains close by. This man was no *(ordinary soldier.)* But he was a Christian Soldier who was fighting the (Enemy of his Soul) to save lives on the Battlefield. He was double crossed even by his own team, now he was stunned out of his mind and betrayed with nowhere to run and go. He lifted up his eyes to a Glorious Mountain that had the *soft white clouds* covering it up from above. This was the only hope he had of seeking some safe shelter. I will lift up my eyes to the hills---- from whence comes my help? My help comes from the Lord who made heaven and earth. *(Psalms 121: 1-2 NKJV)* He was dazed and confused, but kept mumbling Bible Scriptures out of his mouth. It even seemed like it was the Word of God that kept holding him up on his feet. He makes my feet like hinds feet (able to stand firmly or make progress on the dangerous heights of testing and trouble); He sets me securely upon my high places. *(Psalms 18:33 AMP)* This Christian Soldier swiftly *(ASCENDED)* up on the rocky terrain. He was focused only on reaching the top of this place which seemed like it was Heaven’s Open Gates. With the enemy’s shells and bombs exploding all around him, he in his (hearts distress) sung one of his Favorite Psalms and sung it out loud saying: I will say of the Lord, he is my refuge and my fortress: my God in him will I trust. *(Psalms 91:2 KJV)* There was an Unseen foe on the Battlefield that day hunting him down, mocking and laughing at the man running for his dear life. This Malevolent Evil Angel happily pushed the button as a mirage of missiles was launched off. To his ultimate joy *(His Target)* was finally hit as the Soldier fell face first into the gravel and dirt. Everyone that had been *(tracking him down)* rejoiced to see him fall. But soon after this, they were all silenced, as a (Great Shadow) came over all the land even Darkening out the noon day sun. This *(Great Shadow was of a Gigantic Hand)* that passed over the land causing (Great Terror) to fall upon this poor man’s Enemies. This *(Great Shadow)* covered him up like he was being wrapped up gently in a cozy, soft fluffy blanket. He that dwells in the secret place of the Most High shall *(abide under the shadow)* of the Almighty. *(Psalms 91:1 NKJV)* There are *(times in our lives)* when it seems like all Hope is Lost. Especially when we have to go through Seasons of Hopelessness and Dark Days, in *(Times)* like this, it really makes it seem like we have lost the battle. We must *(always remember)* what the Holy scriptures speak to us!!! “Though I walk in the midst of trouble, you will revive me; you will stretch out your Hand Against the wrath of my enemies, and your right hand will save me.” *(Psalms 138:7 NKJV)* There are times in our Christian lives when *(Shadows of Darkness)* seem to overtake and overcome us. IF YOU EVER THINK THIS!!! *(Maybe you should take a little closer look.)* It could be that you are really Under the Shadow of the Most High!!! This *(Great Shadow)* protected this fallen Christian Soldier from any further onslaughts and attacks from the Enemy. God sent his Angelic Servants to his rescue carrying this Christian Soldier to the (Secret place) of the Most High!!! These *(Heavenly Angelic)* beings gently carried the unconscious soldier up into the heights of the Mountain top where he entered a Divine Refuge and Fortress!!! This place looked like an INPENETRABLE CASTLE. The walls of this Extravagant Palace seemed like it extended even unto the Heavens. There were Angelic Guards that stood all around the castle grounds protecting the Holy Grounds upon which the foundations were built. As the Massive Giant Doors were opened These Angelic beings carried the wounded soldier safely inside of its walls. This place seemed like it was a Heavenly Hospital of some sorts. People from all walks of life found tender loving care from inside of its Palace Halls. There were assigned servants that were to attend to the fallen soldier, as they dressed his wounds and changed his garments. This man was totally unconscious for about three and a half days, as his attendants observed him day and night. Finally with all eyes on him, this Christian soldier began to slightly move in his bed. Flashbacks raced through his mind at a thousand miles an hour. One of the Angelic Assistants assigned to this Christian soldier began to race to his bedside to help him out, but he was stopped in his tracks. The Outranking Commander rose up his hand in the air and spoke softly to him saying? God is speaking to him by (Visions and Dreams) revealing his *(Sovereign Plan)* to him. “For God may speak in one way, or in another, yet man does not perceive it. In a dream, in a vision of the night, when deep sleep falls upon them, while slumbering on their beds, then he opens the ears of men, and seals their instruction.” *(Job 33:14-16 NKJV)*

This special and unique book brings to life and makes alive Psalm 91, showing forth the power and promises of learning to dwell in the secret place of the Most High. This is an amazing and shocking account of how Christians overcome devastating obstacles and witness the impossible.

Preston Cary seeks to share the gospel of Jesus Christ with the world through books, movies, and social media outlets, using various forms of modern-day parables, illustrations, and stories from the Bible. And he uses real-life experiences and events in everyday life to reach the lost and to encourage the saints in their faith. He is a faithful ordained minister of the gospel and (stands alone) on the chief cornerstone, wishing to share the good news of the gospel to a hurting and dying world.