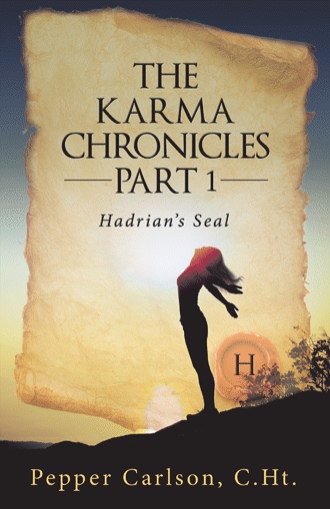 What if karmic debt is real and the powers that be are eagerly waiting to collect? It is said we all have karmic debt and we get seven years to pay it back. We have a responsibility to settle these debts, hopefully learning from our mistakes so we don’t have to go back to that chapter in the lesson book. With good karma, we do good deeds so we will reap what we sow. What about the price tag for bad karmic debt? Do we really have to spend seven lifetimes to get it right? In the first book of The Karma Chronicles, Hadrian’s Seal, a twin dies at birth and leaves her little sister behind to enter the combat zone. With her last breath comes the gift of ageless wisdom and divine intelligence. She mysteriously summons the archangels to help her and learns they were expecting her beckoning call all along.

Pepper Carlson, C.Ht. is a creative visionary, certified hypnotherapist and personal empowerment coach. When not at her writing desk, she is working with clients to help them unleash their personal power and live up to their true potential. A long time volunteer as a tutor for School on Wheels, she also works daily to defend her 2012 title as a Good News Ambassador for the Good News Network, an honor granted to individuals who work to improve society and demonstrate notable goodwill towards others. The former New Yorker is based in Los Angeles and lives by the ocean with her fiancé and their dog, Sir Henry Hudson.