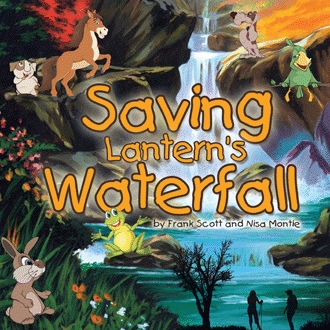 Chapter 1 Big News When Emmanuel Horse woke up that morning, he knew that something was different. He trotted out of the cozy barn he called his home, and sniffed the spring air. The dew was still sparkling on the violet-lined meadow, and the leaves on the live oaks glinted in the warm breeze. Being a large gelding, he needed the exercise. Luckily, Fred Farmer, the human friend who took care of him, had put up a fence around several acres of property. Emmanuel Horse, Major Dog, Melvin Guinea Pig, and his sidekick Hickory Rabbit, lived with Fred and Yolanda Farmer and their two children—twelve-year-old Gene and eleven-year-old Jenny . “I’m going for a trot around the place,” Emmanuel thought to himself, when Sammy Eagle swooped down next to him. “Geez, Sammy! You startled me. To what do I owe your sudden—and, of course, always welcome—appearance?” “Big news. Big news,” the eagle told him. “The animals are gathering together for a special meeting—tonight at Edgar Gnome’s Big Rock by Lantern’s Waterfall. Perhaps you could pass on the word to the other animals living at the Farmers’ place?” “Of course,” the horse said in surprise, shaking his mane and whisking his tail to dislodge some errant flies that had landed on his coat. “When are we meeting?” “At the full moon-rise,” Sammy told him as he spread his great wings and sprang from his perch on a nearby fence post. The eagle turned his head to eye his four-legged friend, “Are you coming?” “How will I get over the fence?” inquired Emmanuel. “I’ll take care of that right now,” said Sammy, flying over to the far gate and unlatching it with his beak. From a distance, the gate appeared fully closed. “Just push on it when you want to leave, and don’t let it click shut behind you so that you can still get back in. “Righteo. Thanks,” Emmanuel said through a mouthful of grass. “Ok. Got to go let the others know. See you at Edgar’s Rock.” said Sammy, with a wink. “OK. See you at the Rock—and thanks for organizing the event,” said Emmanuel, in case Sammy, who was already sailing away, could still hear him.

Epilogue One year later, almost all the humans in the neighborhood of Lantern’s Waterfall were growing organically. The falls and pond had become almost totally herbicide and pesticide-free (Gene and Jenny tested them), and the surface of the pond sparkled and shone in the morning sun. Gene, Jenny, Emmanuel, and Major were relaxing by Edgar’s Rock, listening to the soothing sound of the clear, cascading waters. All the other animal friends were enjoying themselves as well—Abigail diving for fish, Professor Pelican taking a nap, Slippery Frog swimming in the silky-feeling waters, Melvin and Hickory digging holes in the now-clean sandy shore, and, high in an oak tree, Princess Parrot telling Sammy Eagle, “Communication is the key. When the animal and the human friends work together, anything can happen!”

Frank Scott and Nisa Montie joined forces to aid the enlightenment of humanity. Since his youth, Frank has been gifted with unusual experiences that inform and give a map that helps direct each entity on the divine path of truth. Nisa uses animal and fairy characters to teach virtues in joy-filled children's tales.