Scent of an Orange

The Story of Our New Life 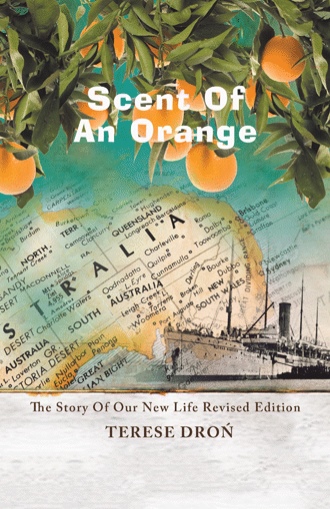 Terese knew she had to write her life story after realizing her daughter had no clue how the family ended up in Australia.

Even her two younger brothers didn’t know much about their family’s history—one was a baby when they moved and the other had been born in Australia.

The fact was that Terese’s parents didn’t talk about their life in Poland, the war, or being separated from their children.

But Terese remembered her mother telling her to run to “the boss” whenever she heard him whistling. The boss hid her throughout the farm on many occasions after she came running to him.

She remembered when she and her baby brother, Wladek, were taken away from their mother, and also when she was separated from him—never to see his face again. Every day, Terese would cry for her mother. And every day, she’d see monsters instead.

When the Allies liberated Poland, Terese was not expected to survive, but the scent of an orange marked a turning point in her journey—one that led her and her parents to a new life in Australia.

Terese Dron was born in a Polish village in 1940. She began life as an innocent victim of the confusion and horror of World War Two. Terese currently lives in New South Wales, Australia.