A Review of Selected Aspects of Body, Mind, and Spirit Well-being 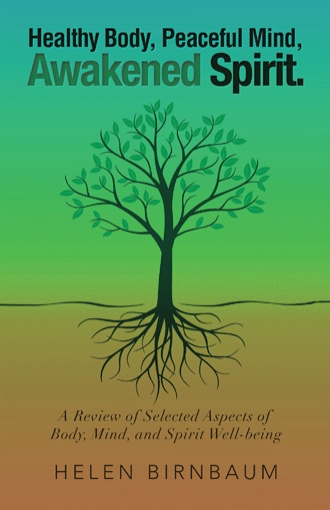 The purpose of this book is to share the information and wisdom that I have accumulated from many different sources and to bring awareness to tools that enhance our lives and well-being. Many different topics are covered. Each topic is vast, and I can give the reader only a taste of each one and the means (via the references) to delve deeper into the subjects that arouse his interest. Hopefully, this information will provide a useful starting point for readers to begin their own study of the holistic approach to well-being that includes spirit as well. It is a route to a more fulfilling life. Many of the great minds of our time are expressing their belief that we create our own reality by interacting with the energy field in which we live. I have cited many authors’ ideas regarding our connection to this field, to one another, and to Spirit. This world of ours is a living, vibrant system of energy. Every thought you think impresses itself upon this system. Whether you like it or not, you are forever creating your reality through what you are thinking. So many people of wisdom tell us that our thoughts and imagination are the most powerful tools we have right here within ourselves. Visualization, affirmations, and intuition are practical ………………………………….. Many of the most successful people we know of have attributed their success in business, science, or the arts to being able to plug into their intuition. The Harvard Business Review reported a study conducted on high-ranking executives and found that they relied on hunches to cope with problems that were too complex for rational thinking. The study concluded that success does not lie in that narrow-minded concept called rationality. Success requires a blend of clear-headed logic and powerful intuition. “Socrates said he was guided by his inner voice. Einstein, Edison, Marconi, Henry Ford, Luther Burbank, Madame Curie, Nobel laureates by the bundle, the list goes on and on of great men and women who have attributed their success directly to their intuition,” writes Kehoe. Shakti Gawain (author of Creative Visualization) says in her book Living in the Light, In this new world/new age, there is an understanding, a knowingness that there is a higher intelligence, a creative power or energy which is the source and substance of all existence. The words and concepts that have been used to describe this power are innumerable. Some names currently used in our culture are: God, Higher Power, Spirit, I Am, Source, Cosmic Intelligence, The Universe, The Light. The words we choose to describe it are merely the labels that suit us best. The word God has so many confusing connotations. Frequently, people associate it with early religious training which is no longer meaningful to them. Once we acknowledge a higher power, the obvious question arises. How can we contact this power or gain access to it? ………………………………….. I want to illustrate the point about allergy and sensitivity to certain foods by focusing on one particular food source previously mentioned, namely wheat, which is rich in carbohydrates and also contains the protein gluten. Apart from occurring in wheat, gluten is found in barley and rye, and it is also a common additive in processed foods, cosmetics, and medicines. My interest in gluten grew when I came across an interesting book while browsing in a bookshop. The book contained a quiz of ten short questions related to one’s health. I quickly did the quiz and found that I had seven of the ten conditions that indicate sensitivity to gluten. The ten conditions listed were: feeling bloated after a meal, diarrhea or constipation, frequent abdominal pain or stomach cramps, frequent headaches, stiff joints on awakening, feeling fatigue after getting adequate sleep, excess mucus/postnasal drip/sinus problems, difficulty keeping mental focus, depression, and frequent skin rashes. The author of this book, cardiologist Arthur Agatston, states that having even one of these conditions may indicate undiagnosed gluten sensitivity. Needless to say I bought the book, The South Beach Diet Gluten Solution, and gained much useful information from it. About 1 percent of the population in both the United States and Western Europe suffer from an extreme allergy to gluten known as celiac disease. ………………………………………………………… One way of connecting with the world of spirit is through a process called channeling, in which contact is made with other levels of reality. In the previous chapter titled “Spiritual Connection,” I describe a number of cases of people communicating with deceased loved ones through a medium—a person who is able to bring forth messages from the spiritual essence of people who have passed over. Here I describe cases of communication with other nonphysical entities or higher beings, such as spirit guides or angels (beings that may or may not have lived on earth). They raise the veil slightly to give us a glimpse of the world of spirit, which is our destination once we leave our familiar earthly plane. Mediums have the gift of being able to access the metaphysical plane effortlessly. They transmit information from the other side, either verbally or in writing. There are basically two kinds of mediums, namely (1) those who bring forth the information while in a trance state and are unaware of the words/ideas that they are transmitting (and who often do not remember anything that was said during the channeling session and are thus called trance mediums) and (2) those who remain fully aware and remember the information that they receive and transmit (and who are called conscious mediums). For some people, this may require a stretch of the imagination as this is a subject we are not normally exposed to. We often hear or read about negative reports involving charlatans who dabble in these activities for money and are not genuine seekers of truth or connection with the other side. The person who channels is not controlled by anyone or anything. Rather he allows the information to flow through his physical faculties—voice and intellect.

Healthy Body, Peaceful Mind, Awakened Spirit provides powerful tools for achieving excellent health, tranquility of mind, and connection to spirit. It discusses food allergies, alternative therapies, mindfulness meditation, relationships, parenting of adolescents, the law of attraction, and the power of our thoughts on the quality of our lives. Concepts such as the role of energy and electricity in the body are explained in simple language. Some of the latest findings in science are described, touching on quantum physics and epigenetics. There are also chapters on religion and the esoteric, thus blending science and spirituality. The book quotes numerous reports of contact with the spiritual realm and provides evidence for the continued existence of the soul after the death of the body. The world of spirit is gradually being revealed to us through channeled information, which is empowering, as it is given with a profound understanding of the human condition. The bridging of science and spirituality contributes to a deeper understanding of the world we live in and of supernatural phenomena. This book presents in part the author’s own journey toward discovering the tools available to us for living skillfully. Helen shares her insights and hope for a better future for our planet as revealed in teachings from the other side.

Helen Birnbaum is a biologist by training and former lecturer/researcher in plant physiology at the University of the Witwatersrand in South Africa. She subsequently developed a career in the chemical industry where she specialized in the safe use and handling of dangerous chemicals. Helen is passionate about the holistic approach to health, and is qualified as a therapist in various alternative healing techniques. The author is a firm believer in our need for connection to Spirit She accepts the concept of a world beyond our 3-D physical existence, and our ability to communicate with it.